Shares of Tesla (TSLA -0.19%) were trading lower on Monday after a U.S. government agency announced an investigation into the company's Autopilot hands-free driving system.

The National Highway Traffic Safety Administration (NHTSA) said that it has opened a formal safety probe into Tesla's driver-assist systems after a series of crashes involving emergency vehicles. (The investigation was opened on Friday, but it was first reported on Monday morning.)

NHTSA said that it opened the investigation after identifying 11 crashes since the beginning of 2018 in which Teslas "encountered first responder scenes and subsequently struck one or more vehicles" at those scenes.

All of the Teslas involved had Autopilot or Traffic Aware Cruise Control, a dynamic cruise-control system included in the Autopilot package, engaged "during the approach to the crashes," the agency said. 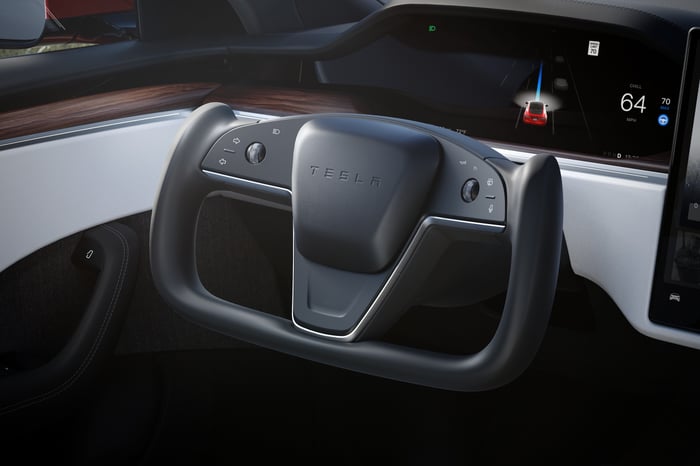 The NHTSA's investigation could lead to a recall of Teslas with the Autopilot option. Image source: Tesla.

NHTSA's move to open an investigation is just that: the beginning of an investigation. As of right now, Tesla isn't facing any consequences. But NHTSA does have the power to force Tesla to recall the affected vehicles, which could impose limits on its Autopilot and Full Self Driving systems, reducing the company's perceived technological lead.

While a software revision isn't likely to be a material expense for Tesla, NHTSA could also impose fines, or require that Tesla make changes to the vehicles' hardware, or both.

While NHTSA's investigation is focused on Tesla, it's also a signal to the industry at large that its regulators are now looking carefully at the so-called "self-driving" space. Auto investors should note that this could have consequences for other companies developing advanced driver-assist or autonomous-vehicle systems.

That's likely to be a good thing for safety in the longer term. But it might be a not-so-good thing for some other high-flying stocks in the near term.