Protecting capital can be just as important as growing it.

Risk can mean different things to different people. That's especially true when it comes to investing. For a retiree, risk can mean the likelihood a stock will decline in value. For a younger investor, it might mean the chances it goes bankrupt. That's why the most important part of investing is matching your portfolio to your risk tolerance.

With that in mind, I set out to find three stocks that could meet most investor's definition of low risk. I looked for companies with a strong market position, returning capital to shareholders, and management that telegraphs careful stewardship of capital. Here's why I chose Visa (V -2.15%), Accenture (ACN -2.50%) , and Novo Nordisk (NVO -1.01%). 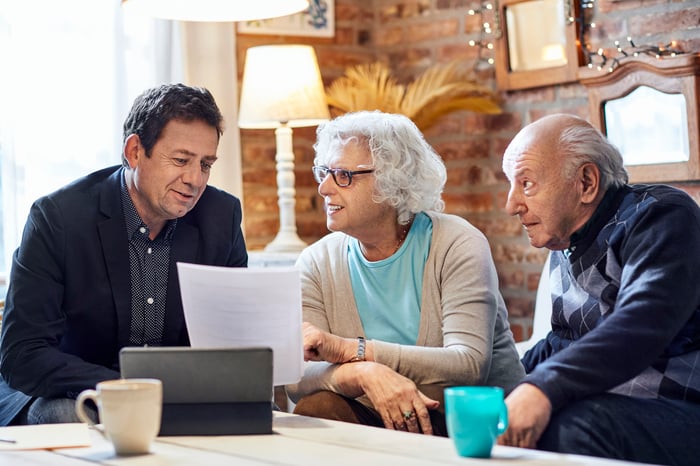 Few way to make money are more reliable than Visa's. It makes money every time someone uses a debit or credit card bearing its logo. Electronic payments have increasingly been the payment method of choice over the years and the pandemic only accelerated the trend. According to the Federal Reserve Bank of San Francisco, U.S. consumers used cash in only 19% of transactions last year. That was down from 26% in 2019 and 30% in 2017. The percent of transactions using cash varies around the globe, but the trend is clear.

That tailwind should give investors a lot of confidence in Visa's ability to grow in the years ahead. Its conservative approach should also help them sleep well at night.

Each year, the company earns almost 30 times the amount it pays in interest on its debt. Over the past five years, management has repurchased nearly 12% of the shares outstanding and more than doubled the dividend. Add in the fact that the stock trails the S&P 500 index over the past year -- 18.5% compared to 32% -- and now could be the perfect time to add ballast to your portfolio with shares of Visa.

A consulting business may not seem like a low risk venture. It is when you have the breadth and scale of Accenture. The company operates in 120 countries, serves three out of four companies listed in the Fortune Global 500, and offers services across end markets including technology, media, and financial services, as well as health and public services. It has generated nearly $48 billion in revenue over the past 12 months.

Although the pandemic temporarily stunted growth, business is finally back. Overall, revenue climbed 4% for the fiscal year ending Aug. 31. last year. Since then, the company has reported subsequent quarterly increases in its top line of 2%, 5%, and 16%. That supported a 10% increase in the dividend. It's the eleventh consecutive year it has gone up. The current yield may only be 1.1%, but the payout has climbed 60% over the past five years and is still only 38% of profit. That leaves plenty of room for future raises. Interest payments won't be an issue either. The company carries virtually no debt.

Management is calling for even more strength ahead. It's an easy projection as Accenture's bookings -- contracts for future work -- was 39% higher in the most recent quarter than at the same time last year. Not only will that produce higher revenue, management says it will lead to expanding profit margins and increased share repurchases. That's welcome news. Accenture has not historically returned capital through buybacks. The company has all of the markings of a low-risk investment. Still, safety has a price. The stock trades at a historically high multiple of cash flow. Given the projections, it might very well grow into that multiple. Either way, it should be at the top of every conservative investors' buy list in any stock market sell-off. 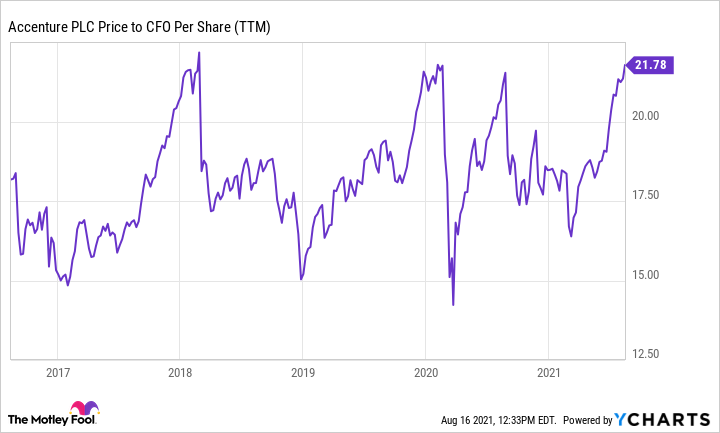 ACN Price to CFO Per Share (TTM) data by YCharts

From 1958 through 2015, diabetes in the U.S. went from affecting less than 1% of the population to 7.4%. That rose to 10.5% as of 2020. It has become a leading cause of death and it is estimated that 463 million people now live with the disease. That's more than triple the number from 2000. The International Diabetes Federation projects that will top 700 million by 2045. With about half of the $20 billion insulin market and 28% market share in diabetes treatment, it makes pharmaceutical giant Novo Nordisk one of the most reliable companies around. The stock may not repeat its 3,880% return over the past two decades, but it has all the makings of a good low-risk choice for a conservative portfolio.

Novo Nordisk has grown revenue and net income by 96% and 160%, respectively, over the past decade. And it hasn't kept the profits to itself. It has rewarded shareholders by raising the dividend an average of 14% per year over that span. The stock currently has a yield of 1.4%. The company has also repurchased almost 19% of the outstanding shares in that span. Although management has raised a small amount of debt over the past few years -- it carried none as recently as 2018 -- it is easily manageable.

Notably, the company isn't only riding the wave of diabetes to decades of profits, it's also helping to address an underlying cause. In addition to several drugs in its diabetes pipeline, its treatment for chronic obesity was recently approved by the Food and Drug Administration. It's committed. Management has targeted doubling its market share of obesity-related products by 2025.

Like Accenture, the stock is trading at a high multiple of sales and cash flow compared to its history. Also like the consulting firm, it has recently reported impressive results and given Wall Street visibility into strength in the year ahead. A risk-averse investor might find Novo Nordisk's combination of conservative management and long runway of growth too hard to ignore.