The bank trades at four times tangible book value, which is much greater than even very high-performing banks.

Live Oak Bancshares (LOB -1.61%) has been on a wild ride since the pandemic began, with its stock price catapulting from under $20 per share prior to COVID-19 to more than $61 per share now. Live Oak's current share price means it's trading at more than four times its tangible book value, which is a bank's equity minus intangible assets and goodwill.

That is a crazy-looking valuation in the banking space, as very strong bank stocks typically only trade around two or three times tangible book value. After the big run-up in its stock price, can Live Oak sustain this high valuation?

Live Oak's business model is complex, but in general it revolves around servicing small businesses through its national lending and deposit platform. The bank makes the majority of its loans in partnership with the U.S. Small Business Administration (SBA), where the SBA guarantees a large chunk of the loan due to the fact that a lot of these small businesses would be deemed too risky for a conventional loan. Live Oak also makes a good amount of loans that are partially guaranteed by the U.S. Department of Agriculture, mainly to rural small businesses for renewable energy systems or to make energy-efficiency improvements. Live Oak also makes conventional loans as well. Then the bank retains these loans on its balance sheet or sells the guaranteed portion of loans partially backed by the government into the secondary market, which it earns fees on for the sale and for servicing some of the loans going forward.

Live Oak also has a venture arm in which it invests in emerging fintech companies, many of which it actually uses in its own banking operations. Another subsidiary of the bank, Canapi Advisors, provides investment advisory services to other funds looking to invest in fintech companies. Investments Live Oak makes can result in equity investment gains, while Canapi can earn those gains and management fees from the funds it assists. 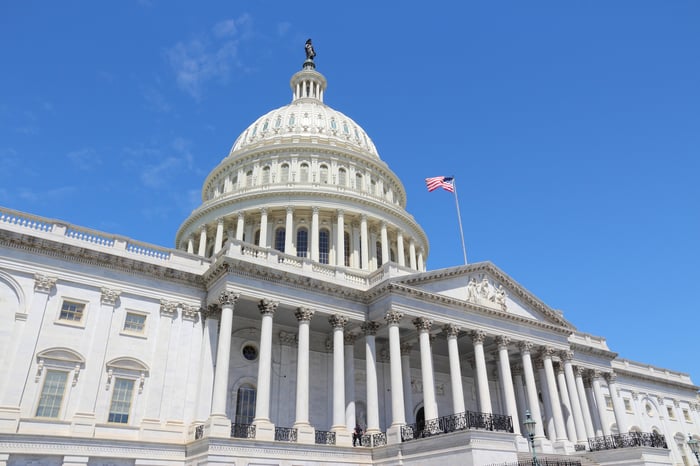 Live Oak can thank lawmakers for much of its recent success. Image source: Getty Images.

As one of the largest SBA lenders in the country, Live Oak's stock really began to soar when Congress implemented the Paycheck Protection Program (PPP) to aid small businesses struggling during the pandemic. Because that program was built on top of traditional SBA lending, it turned into a once-in-a-lifetime opportunity for the small bank. Live Oak took full advantage, originating $2.31 billion in total PPP loans, a massive amount for a bank of its size, which resulted in fees and interest that overall benefited net interest income (essentially the profits banks make on loans and securities).

But even as PPP loans have wound down and been forgiven, Live Oak's unique lending verticals continue to help the bank outpace the industry. Core loan growth in Q2 is up 10% from the first quarter of the year and 40% on a year-over-year basis -- much better than most banks. Several of the bank's lending verticals launched after 2017 are really starting to perform, including bioenergy, community facilities, general lending solutions, senior housing, and sponsor finance.

The bank also did record originations excluding PPP of $1.1 billion in the quarter. Management is projecting full-year originations to come in between $3.3 billion and $3.5 billion, which seems conservative considering the bank has already done $1.78 billion in originations through the first half of the year and management has talked about all of the momentum in the business.

Streamlining deposits and leaning into fintech

Not only do I expect core loan growth to continue to be strong, but Live Oak also can bring down its deposit costs a lot in the future. Close to half of its deposit base, or more than $3 billion of deposits, still comes from higher-cost certificates of deposit (CDs) that the bank pays an average yield of 1.35% on, which is very high in this low-rate environment. More than $1.7 billion of these CDs mature in less than one year. The bank can bring down deposit costs even if it just replaces them with new CDs because CD rates have fallen with broader interest rates.

But more long term, I am hopeful that Live Oak will be able to significantly grow lower-cost core deposits with its new deposit platform, which, according to management, is one of the few platforms where businesses can open an account seamlessly without any human engagement. In less than a year, Live Oak has added more than 2,730 new accounts to the platform and gathered over $400 million of deposits. Later this month, Live Oak is preparing to convert all 60,000 of its legacy consumer savings and CD customers onto the new platform. The bank is also currently developing a small business checking account product for its customers, which, if successful, could drive lots of cheap deposits, especially when you consider the traction the bank already has with so many small businesses. So in the near- and long-term outlook, the bank should be able to significant bring down deposit costs and hopefully widen loan margins.

I also really like what Live Oak is doing with its venture arm. Live Oak's approach is unique because it is investing in a lot of fintech companies that it integrates into the bank itself and offers to its customers. For instance, Live Oak uses the Finxact core processing system and also has invested in Finxact. Live Oak is the customer many of these fintechs are targeting, so the bank knows the landscape very well when making investments and will also be able to stay on top of the latest digital banking capabilities. This kind of investing, while riskier, can also be very profitable. In Q2, Live Oak realized a gain of $44.1 million related to its investment in Greenlight Financial Technologies through a sale of a portion of its shares in the company.

Considering everything mentioned above, I do think Live Oak can sustain its high valuation. It's producing above-industry growth and profitability, and operating much more like a fintech than a traditional bank, which is important because successful fintechs often get assigned much higher multiples than successful banks. As Live Oak continues to grow nationally and further adopts digital banking capabilities that cater to small businesses better than the competition, I think this is a bank that has a lot of growth ahead.

1 Stock That Could Prove the Short-Sellers Wrong
363%