Please ensure Javascript is enabled for purposes of website accessibility
Log In Help Join The Motley Fool
Free Article Join Over 1 Million Premium Members And Get More In-Depth Stock Guidance and Research
By Daniel Sparks – Aug 18, 2021 at 8:31AM

The new, lower-priced phone has some exciting features and a nice look. But Alphabet investors shouldn't be fooled. Despite what may appear to be aggressive efforts from Alphabet to beef up its smartphone business, it's still a small part of the online search juggernaut's overall business. Alphabet is still, first and foremost, an advertising business. 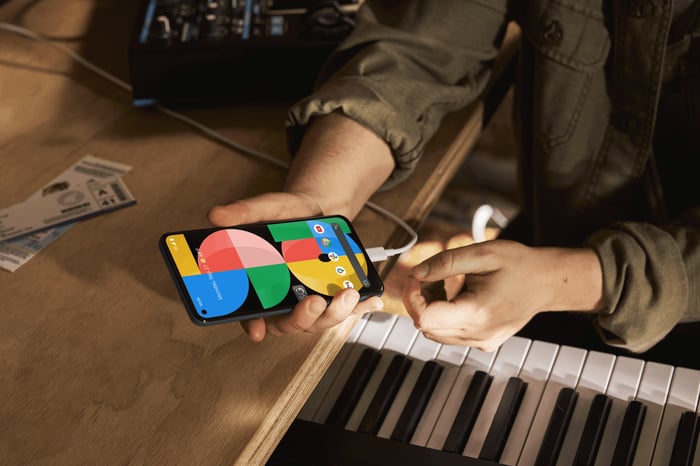 The device will set back customers $449. This makes Pixel phones more accessible to consumers with smaller budgets. We don't know yet how much Google's recently announced Pixel 6 and 6 Pro will cost, but they're expected to be premium-priced devices.

There's a lot to like about the device. New key features include a dual-camera system, 5G-functionality, IP67 water and dust resistance, and one unique color: "Mostly Black," Google called it in a press release about the new device, "with forest green undertones and an olive-colored Power button." Of course, Google offers a case for the phone in four different colors so that users can personalize the device's look.

Those who order the device first won't have to wait long to get their hands on the device. It ships next Thursday, Aug. 26.

4. Alphabet is still an advertising company

Despite Alphabet's ongoing hardware efforts, the company is still primarily an advertising business. Of the company's $61.9 billion in second-quarter consolidated revenue, just $6.6 billion came from the company's "Google other" segment. Hardware gets lumped into this segment, along with revenue from Google Play, YouTube, and other products and services.

Though Alphabet's hardware business remains somewhat of a side-job compared to the company's thriving ad business, it's still a promising segment. Management said in the company's second-quarter earnings call that hardware was a key driver for the company's Google other segment, which saw revenue increase 29% year over year during the period.

As Alphabet CEO Sundar Pichai said in the company's second-quarter earnings call, "Pixel remains at the heart of that long-term strategy."

The nascent business is certainly worth keeping an eye on. But it has a long way to go before it starts moving the needle for the megacap company.