Please ensure Javascript is enabled for purposes of website accessibility
Log In Help Join The Motley Fool
Free Article
Join Nearly 1 Million Premium Members And Get More In-Depth Stock Guidance and Research
By Will Healy – Aug 18, 2021 at 5:39AM

A strong earnings report boosted the stock, but challenges remain.

Palantir Technologies (PLTR 1.14%) built an advantage by becoming one of the first companies to allow users to integrate, manage, and secure data, and the company has prospered through its analytics capabilities. However, some of its practices and the nature of its business have deterred other prospective investors.

Let's take a closer look at the company's attributes to see whether it can continue to drive investor returns. 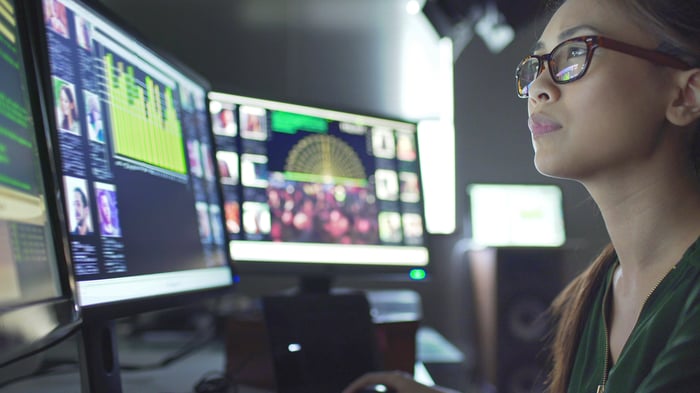 The competitive advantage in analytics

Palantir is a company specializing in data mining. The company's products allow for human-driven data analysis without a deep knowledge of query languages or statistical modeling. This focus helped Palantir build a client base around two products: Gotham, which serves government and law enforcement agencies, and Foundry, which can obtain and organize data primarily to help businesses.

The company also stands out from big data companies like Snowflake or Salesforce.com's Tableau. Snowflake bills itself as a complete database, while Tableau focuses on data visualization. Although Palantir may integrate data, it gears itself primarily to deliver insights through its Apollo software, which works with both Gotham and Foundry. Apollo's emphasis on data-based discovery separates it from a Snowflake, which seeks to collect and store data, and a product like Tableau, which focuses on visualization.

However, Gotham has brought Palantir controversy due to ties to government agencies like the CIA and ICE. In an interview with Axios, CEO and co-founder Alex Karp acknowledged that some agencies had used Palantir's data analysis tools to "occasionally kill people." Such work could deter some investors concerned about ethics and others who may not understand the company's full capabilities due to the secretive nature of such clandestine operations.

Despite such ties, Palantir continues to drive meaningful growth. For example, Chief Operating Officer Shyam Sankar mentioned on the Q2 2021 earnings call that the company added 20 customers in the second quarter alone. This helped Palantir earn nearly $717 million in revenue in the first six months of 2021, meaning it climbed 49% compared with the first two quarters of 2020.

Moreover, this includes a 90% increase in commercial revenue versus year-ago levels. Such lines of business help Palantir as commercial activities hold no direct ties to its government operations.

Still, its general and administrative expenses surged 86%, primarily driven by increases in stock-based compensation expenses. This led to a loss for that period of $262 million, well above the $165 million loss in the first half of 2020.

As for the future, the company forecasts revenue of $385 million in Q3, a 33% year-over-year increase if it meets expectations. Palantir offered only limited guidance for 2021 and beyond, though it projected annual revenue growth of 30% or more every year through 2025. Such growth exceeds the 18% compound annual growth rate that ReportLinker forecasts for the global big data market through 2025.

Palantir is on sale

Palantir offers investors something not commonly seen among tech stocks today: a discount. After peaking at $45 per share back in January, Palantir stock sold off significantly when it reported a loss due to stock-based compensation expenses in its Q4 earnings report. The stock has gained little traction since then. At today's price of approximately $25 per share, investors can buy the company at just over a 45% discount. 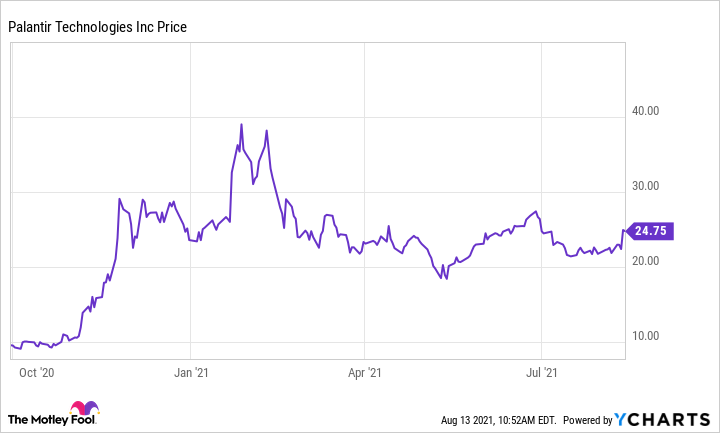 Additionally, it sells for a sales multiple of about 31. Indeed, that may appear high, especially since Salesforce sells for 10 times sales and also turns a profit. Nonetheless, Palantir's multiple has fallen from the 46 price-to-sales (P/S) ratio it had reached in January. Furthermore, it remains much cheaper than Snowflake, which still trades at more than 100 times sales.

Palantir continues to capitalize on a growing big data market. Given its current and forecasted revenue increases, neither net losses nor its 31 P/S ratio are likely to deter investors.

Moreover, despite controversies, Palantir has maintained its government contracts and has made significant inroads on the commercial side. Thus, even if the government curtails specific data analytics initiatives, this tech stock remains well-positioned to stay on a growth trajectory.

Will Healy has no position in any of the stocks mentioned. The Motley Fool owns shares of and recommends Palantir Technologies Inc., Salesforce.com, and Snowflake Inc. The Motley Fool has a disclosure policy.