Please ensure Javascript is enabled for purposes of website accessibility
Log In Help Join The Motley Fool
Free Article Join Over 1 Million Premium Members And Get More In-Depth Stock Guidance and Research
By Anthony Di Pizio – Updated Aug 19, 2021 at 10:40AM

Slowing growth and elusive profits can be a recipe for disaster in a highly competitive industry.

DoorDash (DASH -1.48%) released its second-quarter earnings report on Aug. 12 and investors responded with disappointment, sending the stock down 5% in after-hours trading.

At face value the company is growing robustly, but there are clear signs of a deceleration in some of its key financial metrics, which should make the bulls a little nervous going forward. Consumers have been deprived of dine-in restaurant experiences because of the pandemic, so now that the economy has reopened they're going out more often rather than ordering from food delivery services like DoorDash.

The company predicts a slowdown next quarter, but let's explore two other reasons to avoid this stock right now. 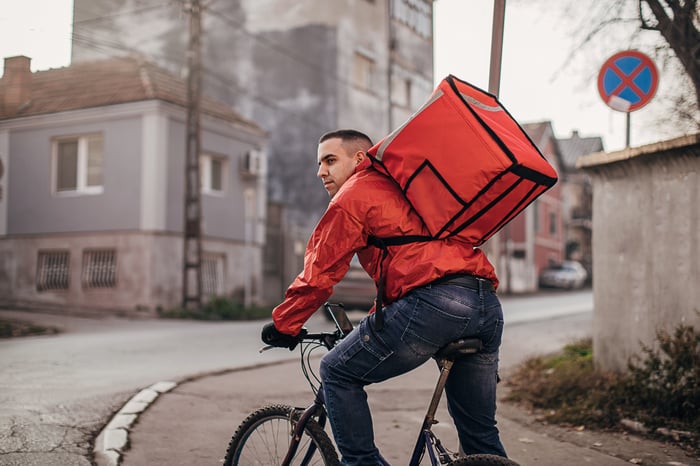 1. Growth has tapered in a big way

The pandemic created a perfect environment for technology platforms that could help minimize COVID-19 disruptions in consumers' lives. Food delivery certainly fit that bill, and DoorDash was a big beneficiary, experiencing a bumper 2020 in terms of growth.

But it was always going to be a challenge to maintain that financial performance this year as people emerged from their homes and dropped the shackles of lockdowns.

Second-quarter revenue growth of 83% was still incredibly strong, but the concern is the pace with which that growth has decelerated. The trend suggests that the company was expanding fastest at the peak of the pandemic in mid-2020, and as restrictions gradually lifted there was slowing demand for DoorDash's service.

Since the beginning of 2021 both gross order volume and revenue have risen by 27%, and the company has indicated it expects a slowdown in the third quarter due to seasonality. In the absence of a booming fourth quarter, it's highly likely that the days of triple-digit percentage growth for DoorDash are over.

This calls the company's valuation into question, because with a $61 billion market capitalization the stock trades at 12.5 times projected 2021 full-year sales -- with no earnings. And if DoorDash couldn't convert last year's tailwinds into profits, it doesn't bode well for profitability going forward.

Typically in a business with few barriers to entry, profit margins shrink over time as competitors come in and steal market share. Food delivery is very much a moat-less business, meaning it has no real unique qualities that protect the concept over the long term.

If a consumer were presented with three companies that all do the same job, price becomes the only differentiator -- and it creates a race to the bottom as the three companies compete for that consumer's order. In fact, according to a second-quarter survey by Bloomberg, DoorDash, Grubhub, and Uber's Uber Eats platform shared over 40% of their customers.

As a result, DoorDash has struggled to convert its success to the bottom line, suffering from persistent net losses and stagnant EBITDA despite its enormous revenue growth.

The company has no issue generating gross profits, but the problem comes after factoring in mounting expenses. For instance, sales and marketing costs ballooned 154% in the second quarter to $427 million -- highlighting the steep price to acquire and retain customers in this industry.

But overall expenses were up 106% (or $687 million) to $1.335 billion for the quarter. Contrast that with the meager $330 million increase in gross profit, and it's plain to see how the company arrived at a net loss.

Why you should avoid it

If the short-term headwinds aren't enough, consider the longer-term picture. Analysts expect revenue to grow just 21% in 2022, and for life in the red to persist with negative $0.71 in losses per share.

DoorDash has about $3.3 billion in cash, so there's a long runway to figure out some version of the food delivery model that works. But investor patience might be getting tested at the moment, considering the negative reaction to the second-quarter earnings release.

There's only so long a company can lose $100 million per quarter before its stock suffers consequences. The question is whether you want to be holding it after a 35% year-to-date gain, given next year (and beyond) looks like it'll be more of the same except with significantly lower growth rates.