Please ensure Javascript is enabled for purposes of website accessibility
Log In Help Join The Motley Fool
Free Article Join Over 1 Million Premium Members And Get More In-Depth Stock Guidance and Research
By Rich Smith – Aug 19, 2021 at 9:01AM

Which of America's space companies will take American astronauts back to the moon? The short answer to that question is: SpaceX, which in April won a $2.9 billion contract from NASA to build the space agency's new Human Landing System -- beating out Blue Origin and its partners Lockheed Martin (LMT -0.27%) and Northrop Grumman (NOC -0.32%) in the process.

But the longer answer to that question might be: Not only SpaceX. Blue Origin still might get a piece of this most lucrative of government space contracts. 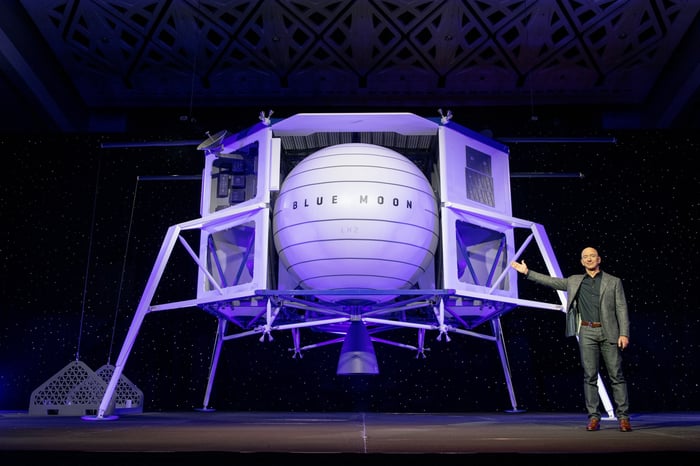 If at first you don't succeed, hire a lawyer

As you may recall, no sooner did NASA name its winner on the Human Landing System (HLS) contract than the losers -- Blue Origin and its friends, and also a third team led by Leidos subsidiary Dynetics -- protested the award to the Government Accountability Office.

For three long months, the GAO considered both of the aggrieved parties' complaints, before finally rejecting them late last month. As the GAO explained, NASA's decision in April was "reasonable, and consistent with applicable" law. Moreover, "SpaceX submitted the lowest-priced proposal with the highest rating," while the Blue Origin and Leidos bids "were significantly higher in price" -- reportedly, $5.9 billion and $8.5 billion, respectively.

At those prices, noted GAO, "NASA ... lacked the necessary funding to make more than one award," and so went with the highest-quality and lowest-priced bid -- SpaceX's.

But here's the thing: Just before the GAO rendered its verdict, Blue Origin clarified that its real objection to SpaceX winning the award was that it wasn't given the chance to revise its bid and lower its price to fit within NASA's budget, once it turned out there wasn't enough money to fund a second HLS from a second provider.

"Blue Origin could have and would have taken several actions to ... reduce its price to more closely align with funding available to the Agency" had it known that was an option, argues Blue Origin. And to that end -- and in an attempt to salvage its losing bid -- Bezos penned a letter to NASA Administrator Bill Nelson offering an "outright and permanent waiver" of "up to $2 billion" off of its bid price.

Bezos also offered to conduct, free of charge to NASA, "a pathfinder mission to low-Earth orbit of the lunar descent element to further retire development and schedule risks."

Of course, that letter went to NASA, not to the GAO. And four days after it was sent, the GAO issued its ruling quashing Blue Origin's (and Dynetics') protests.

But Bezos is undeterred. Despite not getting a callback from NASA on its offer to cut its bid price, and despite losing its protest before the GAO, Blue Origin still has one card to play -- one last chance to get back in this space race:

On Monday, Blue Origin challenged the GAO's decision in the U.S. Court of Federal Claims, insisting that the space agency conducted an "unlawful and improper" review of the HLS bids. Although the details of Blue Origin's challenge are hidden within a "sealed complaint," reports CNBC, the crux of the company's objection appears to be that NASA overlooked the "immensely complex and high risk" of SpaceX's plan for sending astronauts back to the moon, and that entrusting NASA's moon dreams solely to SpaceX -- without a backup provider by the name of Blue Origin -- puts the entire project in jeopardy.

Blue Origin updated its HLS infographic about SpaceX's Starship, saying this is "what immense complexity & heightened risk' looks like for going back to the moon:" pic.twitter.com/QtffH8dEio

If SpaceX's plan is "high risk," though, then Blue Origin's decision to sue (what it hopes will become) its primary customer and biggest source of future revenues looks like an absolute Hail Mary.

Although the Federal Claims court will review this case de novo, unbound by the GAO's earlier decision, the facts of the case will be the same ones that convinced the GAO to vindicate NASA's award to SpaceX. All else being equal, you have to figure the odds favor SpaceX winning its case again (although, Blue Origin could appeal this loss as well). For that matter, even if Blue Origin wins, it's unclear the company would walk away with a contract, as NASA has stated it doesn't have the funding to buy two separate HLS systems right now.

In deciding to sue NASA, moreover, Blue Origin runs the risk of creating significant ill will that could cost it a shot even at winning future moon contracts. After all, back in April when it awarded the first HLS contract to SpaceX, NASA made clear that there would be opportunities for other companies -- such as Blue Origin -- to bid on future awards. NASA promised to "implement a competitive procurement for sustainable crewed lunar surface transportation services that will provide human access to the lunar surface using the Gateway on a regularly recurring basis beyond the initial crewed demonstration mission" (emphasis added).

While not as high profile as the first mission to return to the moon, these subsequent contracts should still amount to billions of dollars of future revenue for the companies that win them. By suing NASA over the first HLS contract, though, and in effect trying to force NASA to hire it, Blue Origin may end up imperiling its ability to win future work from the space agency.

As an investor, you have to figure that this will diminish Blue Origin's value in any future attempt to IPO, even as it makes SpaceX look like more of a "team player" to NASA -- and a better bet for investors in a future SpaceX IPO.