Please ensure Javascript is enabled for purposes of website accessibility
Log In Help Join The Motley Fool
Free Article Join Over 1 Million Premium Members And Get More In-Depth Stock Guidance and Research
By Jeremy Bowman – Aug 19, 2021 at 9:28AM

The retailer just reported another flawless quarter, but the market still seems skeptical.

There's no question that one of the biggest winners during the pandemic was Target (TGT 1.22%), especially among retail stocks.

The big-box chain's same-day fulfillment strategy delivered outstanding results, and its hybrid model as both an essential and discretionary retailer drove sales growth across all of its major categories last year, from apparel to groceries. Comparable-store sales jumped 19.3%, and adjusted earnings per share rose 47%.

With the pandemic tailwinds fading and comparisons with the prior year getting more difficult, there were some questions coming into its second-quarter earnings report if its momentum would continue, but the retailer unquestionably delivered. Among the highlights were:

Target's guidance also called for continued strong growth as management forecast high-single-digit comps growth in the second half of the year, at the high end of its previous guidance. And it projected an operating margin of at least 8% for the full year, though that guidance seems to be conservative considering that operating margin for the first half of the year was 9.9%. Management also announced a $15 billion share buyback, a sign it believes its stock is undervalued.

Despite the strong results, investors shrugged off the report, sending the stock down 1.7% in afternoon trading on Wednesday. That might not be a big surprise as the stock is up more than 40% year to date. However, the company's execution beyond the headline numbers indicates that Target still looks like a long-term winner. Here are a few of the things the company is doing right. 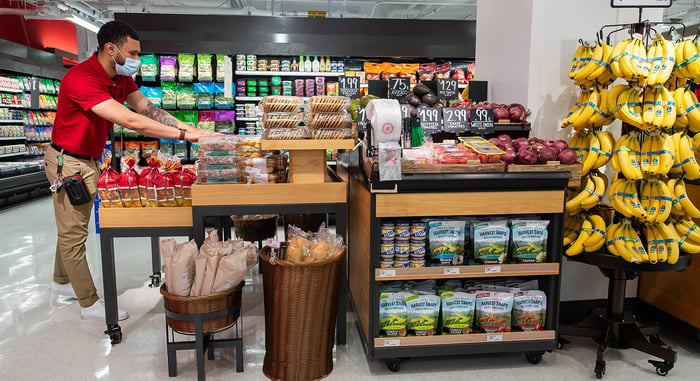 Owned brands are still on fire

One of the things that differentiates Target from its retail peers is the company's success at developing private-label brands. These brands both help distinguish the company from its competitors and act as a draw for customers. They also provide higher margins than name brands since Target controls every step of the process, including production, marketing, and distribution.

In the quarterly report, Target noted that owned brands grew in the mid-teens, outperforming the overall business, and the company pointed to standouts like Favorite Day, a dessert brand; Good & Gather, a packaged-food brand; and All in Motion, its athleisure brand.

The company also said it would launch a new pet food brand, Kindfull, in the quarter, in addition to ramping up its new partnership with Ulta Beauty, launching a collaboration with children's book author Christian Robinson, and introducing its fall designer collection.

Unlike competitors such as Amazon and Walmart, which use distribution centers for most of their e-commerce orders, Target relies on stores to fulfill most of its online orders. And the heart of that strategy is same-day fulfillment, which allows customers to pick up their orders that day or get them delivered through Shipt with an additional fee. Using its stores to fulfill orders is both a cheaper and faster option than relying on distribution centers, and giving customers the ability to get orders that day is also often a better option than waiting several days at home for an order to arrive.

It's clear that Drive Up has resonated with customers, and that should continue to drive sales higher even as the pandemic fades.

Target is arguably executing better than any other retailer in the country. It's posting strong growth and wide profit margins. It is increasing sales both in stores and online, and seeing growth across all five of its product categories.

However, investors still seem skeptical that the growth story can continue even as the company is opening new small-format stores; remodeling much of its existing store base; and spending $4 billion annually for improvements in its supply chain, last-mile delivery, and new stores and remodels. Investors actually balked at that news when the company announced the spending plan back in March, pushing the stock down 7%, but it has rallied 50% since then.

Today, Target trades at a very reasonable P/E ratio of less than 20, cheaper than Walmart, Costco Wholesale, and Home Depot.

That's an exceptionally low bar that the company needs to top in order for the stock to go higher. With the company targeting high-single-digit comps for the second half of the year, that shouldn't be a problem.