Energy stocks took it on the chin this week.

Energy stocks tumbled this week. The average energy company in the S&P 500 slumped nearly 9% over the past five trading days. Among the notable decliners were Phillips 66 (PSX -1.28%), Occidental Petroleum (OXY -0.86%), Clean Energy Fuels (CLNE 1.40%), Core Laboratories (CLB 2.19%), and Continental Resource Development (CDEV 1.63%). All five plunged more than 10% over the past week.

The biggest issue weighing on energy stocks is the price of oil, which has declined by about 8% over the past week, pushing it to its lowest point since May. Several factors contributed to oil's decline, including rising COVID-19 cases and a stronger dollar. 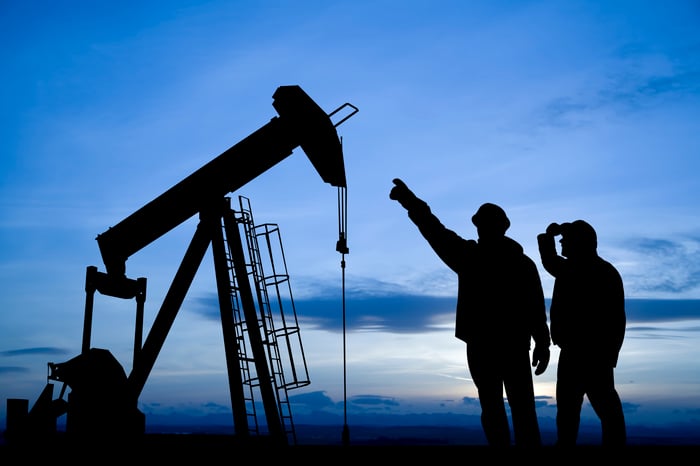 The renewed turbulence in the oil market is impacting a variety of energy companies. With COVID-19 cases rising, people are less likely to travel, which will affect fuel consumption. That's weighing on the shares of oil refiner Phillips 66 and natural gas refueling company Clean Energy Fuels since they'll sell fewer volumes as demand wanes.

Meanwhile, lower oil prices will affect the cash flows of oil producers like Occidental Petroleum and Centennial Resource Development. That's a bigger deal for those particular oil stocks, given their weaker financial profiles. Both companies had been using the cash flows from higher oil prices to pay down debt. With crude prices falling, they'll generate less cash, which will slow down their debt repayment plans.

However, it's worth pointing out that higher oil prices earlier in the year have improved the fortunes of both companies. That led analysts at Cowen to upgrade shares of Centennial this week from underperform to market perform while increasing the price target from $4 per share to $5.75. Cowen said the company's strategy to fix its balance sheet worked, putting it in a position to generate $1 billion in cumulative free cash through 2025 if oil prices cooperate. Despite that upgrade, shares of Centennial still sold off this week as investors grew less optimistic about the staying power of higher oil prices.

Lower oil prices will also affect Core Labs. The oilfield service company relies on oil producers for business. With their cash flows falling, they'll have fewer funds to invest in new oil projects. That will flow down to Core in the form of fewer project opportunities.

Oil price volatility isn't the only headwind energy companies face these days. The global economy is gradually transitioning to cleaner fuel sources like renewable energy. That's forcing more energy companies to rethink their long-term strategy. That's certainly the case for Phillips 66. Earlier this month, the company approved a project to convert one of its refineries to produce renewable fuels. Phillips 66 is also looking into expanding into developing battery components for electric vehicles and energy storage. As part of that move, it agreed to invest $150 million for a stake in a lithium company. These moves will eventually reduce the company's exposure to volatile oil prices.

Oil prices cooled off this week as rising COVID-19 cases caused people to tap the breaks on their travel plans. This decline followed a red-hot run for crude oil in 2021 as the economy started reaccelerating. Given the current surge in cases, crude prices could continue to decline, likely taking energy stocks with them. That volatility is typical for energy stocks, making them riskier investments, especially considering the accelerating transition toward cleaner alternatives.