Cathie Wood is buying! But that's not the whole story.

Shares of driverless-truck start-up TuSimple Holdings (TSP -5.93%) were trading sharply higher on Thursday in a dramatic rebound following a sell-off that may have been triggered by a short-seller's report.

TuSimple, founded in 2015, is a San Diego-based developer of autonomous-driving systems for heavy trucks. The company has an impressive list of partners and investors, including big-rig maker Navistar International, United Parcel Service, Nvidia, and the heavy-truck unit of global auto giant Volkswagen.

TuSimple drew another prominent investor shortly after its initial public offering in April: ARK Invest CEO Cathie Wood, who began adding shares right after the IPO and has added over a million more shares since the beginning of August. One of Wood's big buys (almost 295,000 shares) came on Aug. 12, a day after short-seller Grizzly Research released a report calling TuSimple "all smoke and mirrors." 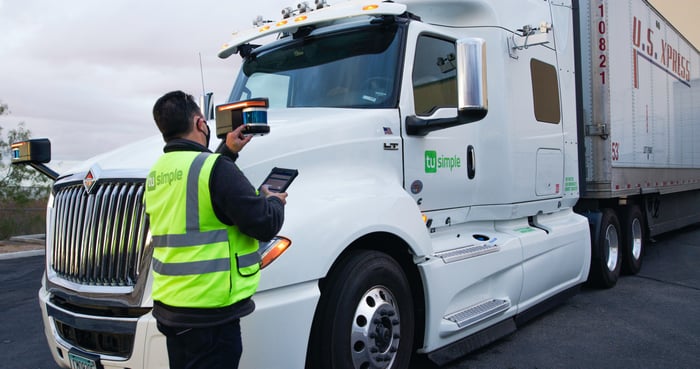 Navistar, maker of this International semi, is a key partner of and investor in TuSimple. Image source: TuSimple.

What about that short-seller's report? To my eyes, Grizzly's report on TuSimple is pretty thin, nothing like the in-depth reports that led to abrupt CEO departures at Nikola and Lordstown Motors.

Among the "allegations," such as they are: An investor in TuSimple is also a key investor in Nikola, TuSimple's founders had an earlier start-up that didn't succeed, and TuSimple has "China origins" and is therefore (somehow) exposed to the country's recent crackdown on consumer-facing online businesses.

Long story short: If you liked TuSimple a month ago, I'm not seeing any reason for you to change your mind now.

Why TuSimple Stock Is Jumping 25% Today

Why TuSimple Stock Is Lower Today
356%