Please ensure Javascript is enabled for purposes of website accessibility
Log In Help Join The Motley Fool
Free Article Join Over 1 Million Premium Members And Get More In-Depth Stock Guidance and Research
By Kody Kester – Aug 20, 2021 at 8:31AM

Even though AstraZeneca and FibroGen must now conduct an additional safety trial to have a chance at FDA approval, not all is lost.

AstraZeneca and FibroGen are collaborating to develop and commercialize roxadustat for the treatment of anemia related to CKD in areas including the U.S., Australia and New Zealand, China, and Southeast Asia. Meanwhile, FibroGen and Astellas Pharma (ALPMY 0.13%) are developing and commercializing roxadustat for the treatment of CKD-related anemia in Japan, Europe, the Middle East, and South Africa.

AstraZeneca and FibroGen received a complete response letter from the FDA earlier this month, requesting another safety trial for both the NDD and DD patient populations. Let's break down the implications for roxadustat's future, and what that might mean for AstraZeneca. 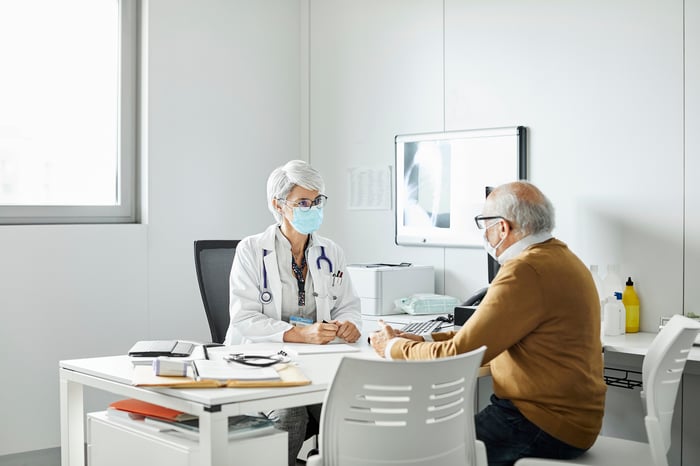 The logic behind the panel's decision

It's worth discussing what led to this decisive rejection. While FDA staffer Dr. Saleh Ayache noted that "the FDA believes the Applicant has provided substantial evidence of efficacy," CRDAC chair Dr. Julia Lewis indicated that "there are concerns over adverse safety."

To this point, FibroGen announced in April that the disclosed safety analyses for roxadustat from November 2019 in the treatment of anemia of CKD were incorrect.

In the original presentation of the study's data, the risk of non-dialysis-dependent (NDD) patients taking roxadustat and experiencing major adverse cardiac events (MACE) over the duration of the Phase 3 trial was 8% higher than for patients taking placebo. The revised data showed a slight increase in that risk, to 10% more than placebo, adding to the overall risk profile of the drug and working against the odds of a potential FDA approval.

The risk of dialysis-dependent (DD) patients taking roxadustat and suffering from MACE was initially thought to be 4% lower than for those taking peer drug epoetin-alfa (Epogen, developed by Amgen and Johnson and Johnson). However, the revised data showed that the probability of DD patients taking roxadustat and enduring MACE was actually 2% higher than Epogen. This meant that AstraZeneca and FibroGen were no longer able to claim that roxadustat was safer than Epogen in DD patients, which was a claim that previously gave roxadustat an advantage over Epogen.

The risk of incident dialysis (ID) patients who have been on dialysis for four months or less taking roxadustat and experiencing MACE was initially thought to be 30% lower compared to Epogen, but the corrected data showed that the risk of MACE complications was only reduced by 18%. While roxadustat remains safer than Epogen in ID patients, the advantage is far less than what was thought to be the case initially.

AstraZeneca and FibroGen will now consider funding an additional clinical trial to continue pursuing FDA approval for roxadustat to treat CKD-related anemia. The trial would test whether a lower dosage of roxadustat would improve its safety profile, possibly allowing FDA approval later down the road assuming efficacy remained steady.

Roxadustat is down, but not out

Even with CRDAC's request for another clinical trial, there's reason to be optimistic. Roxadustat was approved by China's National Medical Products Administration (NMPA) to be marketed for treating anemia in CKD patients, both on dialysis and not on dialysis, in August 2019. And while roxadustat has been on the market in China for less than two years, the drug has made a great deal of progress in the country during that time.

According to FibroGen, hospital listings (a list or formulary of all the drugs available for prescription from a particular hospital) at the end of the second quarter of 2021 "represented approximately 81% of the CKD anemia market opportunity in China," compared with 74% in the prior quarter. In other words, hospital offerings of the drug in China continue to expand. Roxadustat's continued penetration in the China market generated $92 million in revenue for AstraZeneca during the first half of 2021, with an acceleration from $40 million in Q1 to $52 million in Q2.

Even if AstraZeneca isn't ultimately able to secure FDA approval to treat the 6 million patients in the United States with anemia related to CKD, the Chinese market alone could be enough to more than double sales of the drug from now till the end of the decade.

This is supported by a combination of growing adoption of roxadustat within China, as well as the fact that Research and Markets expects the CKD anemia market to grow 3.4% annually, to reach global sales of $6.6 billion by 2029.

The research company anticipates that the Chinese market alone will reach $1 billion in revenue by 2029, so I can see a clear path to about $400 million by the end of the decade for AstraZeneca.

AstraZeneca will be fine regardless of FDA approval

While it remains to be seen whether roxadustat will someday be approved by the FDA, AstraZeneca isn't depending on the approval as much as FibroGen.

This is because unlike FibroGen, which is highly dependent on roxadustat (all of its product revenue came from roxadustat in the first half of this year), AstraZeneca is a diversified large-cap pharma company.

AstraZeneca is trading at around 16 times next year's average analyst EPS (earnings per share) estimate of $3.71, which is still a solid value, given the 20% annual earnings growth that analysts expect over the next five years.

Those who already own AstraZeneca and those considering adding it to their portfolios can both be confident that the company's future is solid regardless of roxadustat's U.S. status.