These energy companies are slowly cleaning up their carbon footprints.

The global economy is steadily transitioning to cleaner fuel sources. That slow pace gives companies time to steadily clean up their carbon profile since the world will continue to use fossil fuels during the interim period. Because of that, investors don't necessarily have to pick a pure play on renewable energy. They can take a more diversified approach and benefit from all aspects of the transition.

With that in mind, we asked some of our energy contributors for their favorite diversified plays on the sector. Here's why they like the measured approaches taken by Royal Dutch Shell (RDS.A) (RDS.B), Enbridge (ENB -0.33%), and TotalEnergies (TTE -1.45%).

Reuben Gregg Brewer (Royal Dutch Shell): As an avid dividend investor, I'm not happy when I see a dividend cut. That's doubly true when the cut comes with a material change in a company's business approach. Which helps explain why I was leery of European integrated energy giant Royal Dutch Shell's decision to shift toward clean energy at roughly the same time that it slashed its dividend a huge 66%.

I support the company using the cash it generates from its oil and natural gas businesses, which still have decades of demand to serve even as the world goes green, to expand into clean energy. My problem is that the dividend cut suggested a big shift in corporate thinking on returning value to shareholders. However, three dividend increases later, and it's clear that Royal Dutch Shell still sees dividends as important. The last increase, meanwhile, was a large one at 38%. Reading into that a little, the company is trying to make a statement about its commitment to investors. I might have preferred that some of that cash to go toward debt reduction, essentially freeing up future financial capacity for clean energy investments, but I also appreciate the importance of the signaling value here. 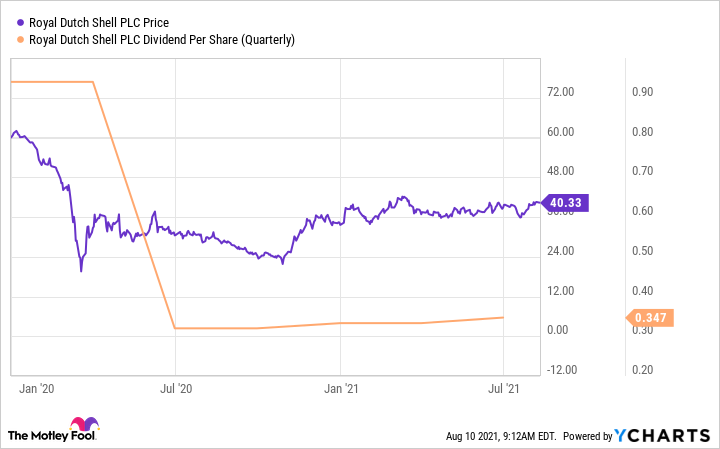 So, as clean energy investments look expensive, Royal Dutch Shell offers a way to enter the sector with a cash cow business backing the effort. And investors can collect a 3.7% yield along the way from an out-of-favor sector. Is this a perfect clean energy play? No. But it's a realistic one, with Shell specifically looking to adjust with society so it can ensure its long-term survival. It's a reasonable, and inherently diversified, way to enter the clean energy space.

Matt DiLallo (Enbridge): Energy transitions don't happen overnight. Despite the acceleration toward decarbonation in recent years, the switch to cleaner energy sources will take decades. That means the global economy will continue relying on fossil fuels for years to come.

That's why Enbridge is taking a disciplined and gradual approach to transitioning its operations. The Canadian energy infrastructure giant has steadily shifted to cleaner energy sources over the past decade, increasing its exposure to natural gas from 33% to 43% of its assets, while growing its renewable power business from 2% to 3% of its operations.

That gradual transition will continue in the coming years. Enbridge currently has 17 billion Canadian dollars ($17.4 billion) of expansion projects that it expects to complete by 2023, including several oil pipeline expansions and additional natural gas infrastructure. It's also investing about CA$3 billion ($2.4 billion) on renewable energy projects, including additional offshore wind farms in Europe and solar self-powering projects for some of its liquids pipelines. These projects should support 5% to 7% annual cash flow per share growth through at least 2023. That should enable Enbridge to continue increasing its dividend as it has for the last 26 straight years.

That steady shift will continue in future years. Enbridge has identified nearly $30 billion ($23.7 billion) of investment opportunities, including more liquids pipelines expansions, additional gas infrastructure, and more renewable and low-carbon initiatives. Those future investment opportunities should enable Enbridge to continue growing its cash flow, which should allow it to keep increasing its dividend.

Neha Chamaria (TotalEnergies): The world is shifting to clean energy, and it didn't take much time for the reality to dawn upon pure-play oil and gas companies that they must make firm moves to join the transition lest they succumb to environmental and social pressures. But no oil giant, perhaps, has been as proactive as TotalEnergies, which has even rebranded itself to better reflect the transformation. Or as the company puts it, "Energy is reinventing itself, Total is becoming TotalEnergies."

TotalEnergies, in fact, strives to become one of the world's top five renewable energy producers by 2030. It is investing heavily into solar, wind, and energy storage, and sees so much potential that it expects electricity, generated mainly through renewable sources of energy, to account for 40% of its total sales by 2050. Although TotalEnergies primarily produces and markets oil and natural gas, electricity is a major output from its natural gas production.

Overall, TotalEnergies aims to bring down its oil product sales to 35% by 2030 from 55% in 2019, and boost its natural gas mix to 50% by then. Some of TotalEnergies' notable recent moves include:

Long story short, TotalEnergies is going all out to decarbonize its operations, making it an incredible offbeat stock to invest in clean energy.

My Top Energy Stock to Buy in October
358%