There's a good chance that the going will get tougher.

As one of the hottest healthcare stocks of 2020, Teladoc Health (TDOC 0.69%) has a lot of momentum. Since even before the start of the pandemic, many millions of people have used its telehealth services to call a doctor when seeing one in person might be difficult to do.

The next few years probably won't be as revolutionary for the company as 2020 was. But there are still a handful of issues that Teladoc could master -- or fumble. Let's map out a couple of the possibilities so that we can judge its most likely trajectory from now through 2024. 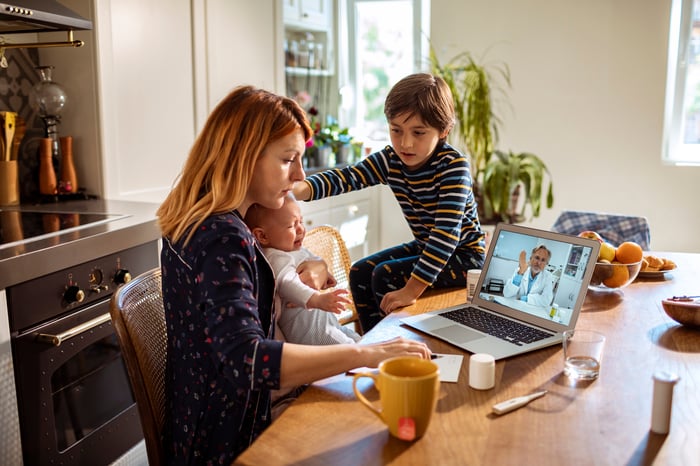 If everything goes according to plan, Teladoc will spend the next three years growing its membership base, increasing its revenue by expanding its range of services, and improving its margins to the point of becoming profitable.

Adding users to its platform is in full swing in the domestic market, but the company's ambition is far larger. Recently, the company started a collaboration with tech company Vivo to provide its services in Brazil. Other international markets are sure to follow, though the economics may not be as lucrative as they are in the U.S. depending on the particulars of foreign healthcare systems. At a minimum, expect the company to have a presence in the majority of English-speaking countries, as it can serve them with its existing roster of clinicians based in the U.S.

Teladoc's range of services is always broadening to create opportunities for income, and that'll continue over the next few years. By late 2024, its recently launched behavioral health platform, myStrength Complete, will be mature. And its suite of medical sensors and telehealth solutions for chronic care conditions will likely have even more features and covered conditions. Both of those initiatives will attract new members, and they'll also increase revenue from a portion of the existing membership base.

There's a chance that Teladoc might be profitable relatively soon. Gross margins are already increasing steadily over time, even in the face of a record number of digital visits. In the best-case scenario, it'll be earnings-positive by late 2022.

There's a chance that Teladoc won't have an easy time between now and August 2024.

There are three things that might weigh the stock down: persistently high costs, difficulty with onboarding new members, and the threat of losing market share to competitors or substitute products. All three, in fact, have already started to rear their heads.

Given that Teladoc isn't currently profitable, the risk of expenses remaining dangerously high is very real, especially considering that its most valuable service -- on-demand access to doctors via telehealth -- is extremely costly. With other telehealth companies and services coming online every day, it's possible that the cost of retaining doctors will rise. An additional complication is that there aren't necessarily too many ways to cut back. After all, physicians can easily take their labor elsewhere if they don't like the rate they're offered by the company.

Getting new subscribers may also be an issue without the impetus provided by the pandemic in 2020. Paid memberships only rose by 2 million between the second quarter of 2020 and Q2 of 2021. But service utilization rose from 16% to 21.5% over the same period. If those trends continue, it could be bad news. Without getting a handle on the cost of providing care, rising utilization amid existing members could deepen losses. And that's before taking the competition into account.

Count on competition to intensify

In both the optimistic and the not-so-optimistic case, Teladoc will face more competitors in three years than it does today. Some of these challengers, like Talkspace, will be focusing on specific segments of the market such as behavioral health. Others will doubtlessly be taking an approach as broad as Teladoc's.

Either way, it'll be harder for Teladoc to gain market share in the future than it is today. And it's entirely feasible that the companies pursuing a focused strategy will be able to steal market share.

Nonetheless, Teladoc will likely be in a significantly stronger position than it is right now. Between its increasing integration with health sensors, consistently rising margins and earnings, and its plans to expand internationally, the stock will likely continue to grow.