Its performance shines in an industry that's shunned by many investors.

The coronavirus pandemic devastated wide swathes of the retail industry, but some pockets of the sector have shown tremendous growth recently. By catering to a niche customer group, focus can be an extremely lucrative recipe for success.

One retail stock that particularly stands out is Five Below (FIVE -1.51%). While the company is smaller than its rivals Dollar General and Dollar Tree with a market capitalization of under $13 billion, its stock has soared an impressive 109% over the past year, outperforming its discount-store peers by a wide margin. 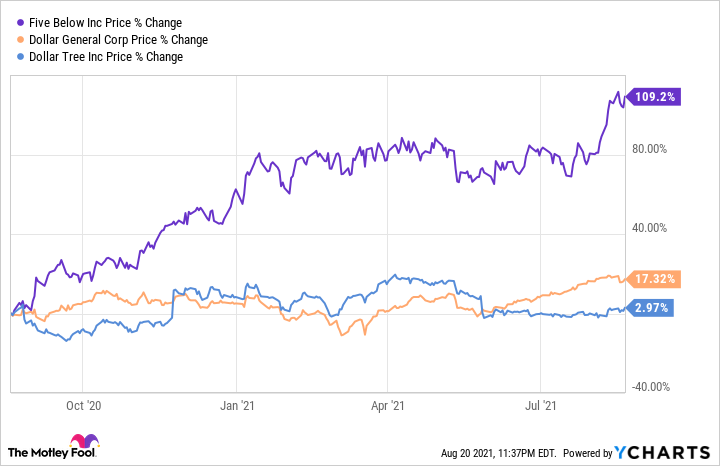 Here's why you'll want to start paying attention to this market-beating stock.

Five Below primarily caters to teens and tweens (those aged 10 to 13), selling a wide assortment of goods ranging from apparel and beauty products to home décor and electronics. Items are typically priced between $1 and $5, and the shopping experience is characterized as a treasure hunt atmosphere, encouraging customers to visit more often with the hopes of finding a great deal.

The company operated 1,087 stores in 39 states as of its fiscal first quarter, a figure that has grown remarkably over the years. From fiscal 2017 through fiscal 2020, Five Below opened 498 net new locations, which management cites as the company's largest growth driver. It's clearly working as revenue and net income in fiscal 2020 more than doubled from 2015 levels.

All of this expansion has been financed with cash on hand, resulting in Five Below having zero debt on its balance sheet. For a retailer, this is a rarity, but it makes the business resilient to adverse economic times, like what the world faced last year.

The unit economics are what really stand out. Although the average cost to build a new Five Below store is $300,000, the average "four-wall EBITDA" (earnings before interest, taxes, depreciation, and amortization), which measures the profitability per store, is $450,000 in the first year. Therefore, the return on investment is a whopping 150% not long after a store opens with each location generating greater than $2 million in first-year sales. You'd be hard-pressed to find another retailer with these kinds of numbers. Five Below's fiscal first-quarter results showcased its continued momentum with revenue and net income up 64% and 93%, respectively, compared to the same quarter in fiscal 2019 (for a pre-pandemic comparison). A total of 67 net new stores opened their doors during the quarter as well. "We believe we remain in a position of strength to continue growing Five Below and driving sustainable, long-term value for all stakeholders," CEO Joel Anderson said in the press release.

And management believes the expansion is far from over. They think Five Below can one day operate 2,500 locations in the U.S. This should come as no surprise, given how successful Five Below's outlets have been thus far.

Targeting a younger demographic gives the business a potential lifelong customer base. Familiarizing teens and tweens with the brand means that when they grow older and have their own families, they're more likely to continue shopping at Five Below. Furthermore, the average annual household income for Five Below's customers is $73,000, substantially higher than those who shop with competitors like Dollar General. That also bodes well for the company's prospects.

It's certainly true the brick-and-mortar retail sector has suffered over the years in the shadow of e-commerce's tremendous growth, but Five Below's success shows there are still lucrative corners in the sector where investors can put their money to work. The stock does command a premium trading at 48 times forward earnings estimates, so if the price tag is keep you away for now, you should still add this discount retailer to your watch list.