Please ensure Javascript is enabled for purposes of website accessibility
Log In Help Join The Motley Fool
Free Article Join Over 1 Million Premium Members And Get More In-Depth Stock Guidance and Research
By Jennifer Saibil – Aug 27, 2021 at 7:15AM

Shares of the streaming platform powerhouse may be expensive, but they are well worth a look for growth stock investors.

Economic stimulus checks from Washington have been a feature of the pandemic, and as the fourth wave of COVID-19 in the U.S. continues to intensify, the federal government could conclude it needs to distribute another round of them. Many Americans may need those stimulus funds to cover basic needs, and others will use them to pay down debt.

But if your financial situation allows you to do so comfortably, you might want to consider investing that next (for now, hypothetical) payment in the stock market. Specifically, I think Roku (ROKU -3.87%) would be a great choice.

Streaming is no longer the insurgent in the world of at-home entertainment. It has attracted hundreds of millions of subscribers globally and is slowly chipping away at traditional linear television's bread-and-butter -- advertising revenue. 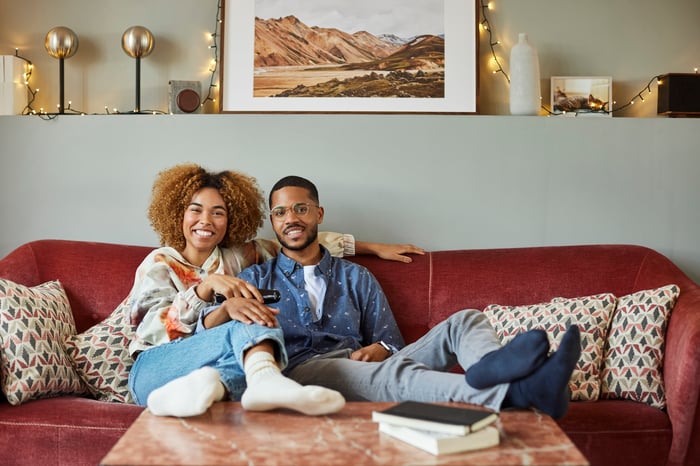 Although the biggest players in the area are Netflix, the original streaming leader, and Disney, the relatively new kid on the block, streaming platform giant Roku has carved out its own content niche with its free channel, where it streams ad-supported content from partner studios, who get a cut of the ad revenue. It recently debuted some original content -- a highly anticipated move that gave it another way to compete with the better-established companies. It's planning to release 75 original pieces in 2021, and so far it has been a success, driving engagement and streaming hours.

It also streams partner channels, such as Netflix, Disney, and Amazon (NASDAQ: AMZN) Prime on its devices and platform.

Roku was a pioneer in developing devices for streaming, and it now markets a range of hardware options. It also has the top operating system in the U.S. by sales. But its ad revenue is demonstrating much more serious growth. Total revenue increased 81% in the second quarter, boosted by platform revenue, which increased 117%, and also accounted for 82% of the total. The big story, though, is that advertisers are moving more of their money over to streaming, because audiences have already moved more of their viewing hours there. Roku's average revenue per user increased by 46% year over year in the second quarter, and 42% of its advertisers were new to the platform. Those trends are likely to continue as Roku gains viewers and advertisers shift their spending in response.

Roku began to post profits last year as sales skyrocketed, and its gross profit increased by 130% year over year in 2021's second quarter.

Roku's stock price rose dramatically in 2020 as streaming use exploded, but its gains have tapered off in 2021. The stock was up 5% year to date as of this writing.

Investors weren't too keen on Roku's second-quarter report. Streaming hours on the company's platform fell compared to the first quarter, reflecting a decline in viewer engagement. Management chalked that up to people going out more as the then-declining numbers of new COVID-19 cases and rising share of vaccinated individuals allowed many pandemic-related restrictions to be lifted. At the time, management also gave an outlook for about 50% year-over-year revenue growth for the third quarter, a stark deceleration from previous quarters -- though Roku does face tough 2020 comps.

Basing an investment decision on one metric, though, is shortsighted. Just as many companies that got crushed during the early quarters of the pandemic are now seeing huge recoveries, companies that benefited from the crisis are naturally going to see some sort of slowdown as it ebbs.

But Roku's business is tight, and it's just getting started. As CEO Anthony Wood noted, among 18- to 45-year-olds, only 39% of the TV-watching they do involves streaming. That gives streamers plenty of room to increase user engagement with their services. With its popular channel and its venture into original content, Roku is making itself a formidable player in the field.

And while the company's player revenue hasn't been too exciting recently, rising just 1% in Q2, some of that was due to supply chain issues. As pandemic-fueled trends begin to even out, investors will soon have a chance to see how Roku will perform under more-normal conditions, and that's likely to be very well.

Roku stock isn't cheap, trading at more than 200 times trailing 12-month earnings -- and over $350 a share as of this writing. But if you have some funds you can dedicate to your long-term portfolio -- whether they come from a stimulus check or not -- Roku stock is a solid bet to provide many years of growth.