Eli Lilly updated investors on its ongoing phase 3 trials to treat patients who have moderate to severe eczema with a new drug.

In mid-August, pharma stock Eli Lilly (LLY 1.20%) updated investors on phase 3 results of lebrikizumab, its potential treatment for patients with a chronic skin disease known as moderate to severe atopic dermatitis (or eczema). Let's delve into why those results look hopeful -- and how this could all translate into profit for Eli Lilly and its investors. 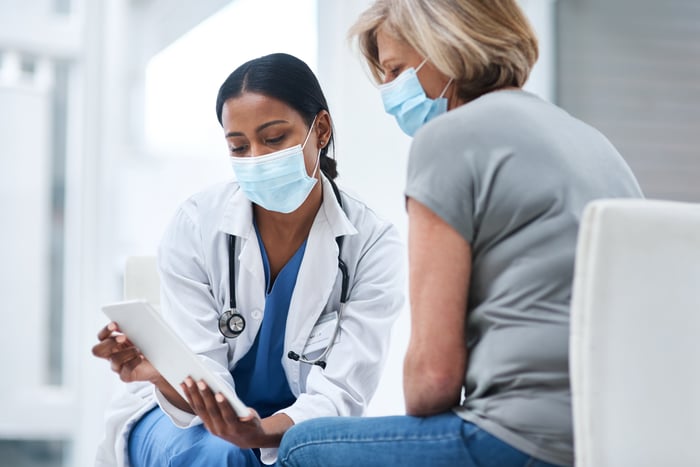 First, a few words about eczema. The Asthma and Allergy Foundation of America (AAFA) describes it as a "chronic, inflammatory skin disease which results in widespread rashes and patches of itchy skin."

The AAFA estimates that approximately 16.5 million or 7.3% of adults in the U.S. are affected by the disease. The condition often leads to emotional burden as well as pain, physical discomfort, and sleep disturbances for patients, especially for those with moderate to severe cases.

Considering that moderate to severe eczema accounts for 40% of all atopic dermatitis cases in the U.S. (and possibly around the world), the potential market for lebrikizumab if approved by regulators, is massive. There remains a need for additional therapies.

Research firm Market Data Forecast expects that the global atopic dermatitis market will compound at an annual growth rate of 13.1% from $11.8 billion in 2021 to $21.8 billion in revenue by 2026.

Efficacy with a solid safety profile

How can we know if a medication will help? Researchers use a measure known as the Eczema Area and Severity Index (EASI), which assesses the extent (by area and severity) of atopic dermatitis. The greater the reduction in the EASI from a patient's pre-treatment baseline, the more effective a drug is in treating eczema.

Lebrikizumab's ongoing phase 3 trials consist of approximately 400 patients, age 12 and older, with moderate to severe eczema. The patients were randomly assigned to receive either a placebo or lebrikizumab for 16 weeks followed by a 36-week maintenance period. During that period, patients who had a good response to lebrikizumab (an EASI of 75 or greater) are randomly reassigned to one of three groups to further demonstrate its efficacy. Group A patients receive 250 milligrams of lebrikizumab every two weeks, group B receives 250 milligrams of lebrikizumab every four weeks, and group C is given a placebo every two weeks.

Though the phase 3 trials are ongoing and specific data won't be presented until next year when the trials conclude, Eli Lilly noted that lebrikizumab helped over half of its patients achieve at least a 75% improvement in the Eczema Area and Severity Index (EASI 75) at week 16 as a monotherapy (the only therapy). This suggests that lebrikizumab may be as effective in this way as Dupixent, made by Sanofi (SNY -1.88%) and Regeneron (REGN 0.68%). By comparison, Dupixent as a monotherapy helped 51% and 44% of patients achieve at least EASI 75 at week 16 in two clinical trials.

With over half of patients who receive lebrikizumab reporting at least EASI 75 (or at least 75% clearer skin), there was also far less itching and disruptions to sleep. Even better news for those suffering from moderate to severe atopic dermatitis is that no new safety risks were reported in the phase 3 trial, which means the drug is as safe as previously thought.

A big positive is that the trial reported only 1.4% of patients receiving lebrikizumab discontinued treatment due to adverse events, which is below the placebo group of 1.7%.

The key takeaways from the phase 3 trials of lebrikizumab were that it was almost as effective as the leader, Dupixent, in treating moderate to severe atopic dermatitis while  being well tolerated by patients.

Lebrikizumab looks to be a great backup plan for Eli Lilly.  That's because of safety concerns surrounding a drug class known as Janus kinase (or JAK) inhibitors. This is the drug class of the other atopic dermatitis hopeful that Eli Lilly owns, Olumiant.

Following Pfizer's (PFE -0.33%) post-marketing study of the JAK inhibitor Xeljanz (used to treat various forms of arthritis and ulcerative colitis), major heart side effects and cancers were reported. This led the Food and Drug Administration (FDA) to stop decisions on a number of JAK inhibitors until the safety of the class has been fully examined.

As potential FDA approvals for JAK inhibitors to treat atopic dermatitis are stalled -- among them, AbbVie's (ABBV 1.26%) Rinvoq, Eli Lilly's Olumiant, and Pfizer's abrocitinib -- lebrikizumab could end up being approved before those three candidates.

This is because there are no major safety concerns associated with lebrikizumab, which is an interleukin-13 (or IL-13) inhibitor. IL-13 is a protein that is often overexpressed in individuals with eczema. This results in an overactive immune system, which is what may bring on atopic dermatitis. By lowering the body's inflammatory response to IL-13 proteins, lebrikizumab has proven effective in treating atopic dermatitis to date in trials. This could help establish Eli Lilly's potential treatment as second to only Dupixent in the atopic dermatitis market, especially if the FDA ultimately rejects JAK inhibitors for this indication.

Considering that 40% of eczema cases globally are moderate to severe and conservatively assuming a 6% market share, this indication for lebrikizumab could bring in over $500 million annually by 2026. While it may prove only to be the second- or third-most effective treatment, the safety profile could lead patients to discontinue other drugs to try lebrikizumab.

This forecast also reflects that Almirall, a Spanish pharmaceutical company, is licensed to develop and commercialize lebrikizumab in Europe for dermatology indications there, including atopic dermatitis.

At about 2% of Eli Lilly's forecast of $26.8 billion to $27.4 billion in revenue for this year, lebrikizumab could make meaningful contributions to Eli Lilly in the near future if approved.

Other drugs with big potential

Aside from its ambitions in the atopic dermatitis market, Eli Lilly has a number of growing drugs that should allow it to deliver high-single-digit to low-double-digit annual dividend growth for the foreseeable future.

Eli Lilly isn't cheap at 33 times analysts' average earnings-per-share forecast for this year of $7.90, but this is somewhat made up by the fact that they expect Eli Lilly's strong drug portfolio to generate 14.8% annual earnings growth over the next five years.

Healthcare investors looking for a quality company with growth on the horizon should consider starting a small position in Eli Lilly and adding on any dips.

2 Stocks That Could Outperform the Next Bull Market
376%