Intuit and Bill.com are heavily exposed to the small business world. That makes investing in them a great way to bet on the U.S. economic recovery.

Small businesses are very sensitive to the state of the economy. They're closely tied to local communities, and therefore don't have the level of reach, scale, or access to capital that large corporations do. So when the economy falters, they're often the first to suffer. Conversely, when times are good, we tend to see a boom in new businesses opening.

While it's not always possible to buy stakes in smaller businesses, there are large-cap companies whose success is directly tied to the general health of these ventures. For example, Intuit (INTU -2.68%) and Bill.com Holdings (BILL -3.88%) provide software to small and mid-sized enterprises to make accounting and back-office operations more manageable.

Online accounting is accelerating at Intuit

Having a full-time bookkeeper isn't cost-effective for most small businesses. Intuit owns Quickbooks, an affordable bookkeeping program that helps keep millions of business owners out of the accountant's office and focused on what they do best. The software can automate transaction reconciliation, generate invoices, and manage cash flow. 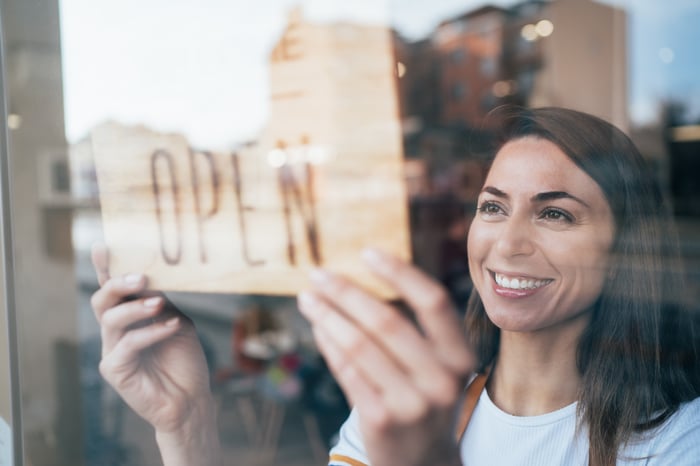 Intuit also has a booming consumer business thanks to its TurboTax software, which helps individuals and families process their tax returns. Additionally, it opened a whole new revenue stream through its acquisition of Credit Karma, which provides consumers with free credit reports in exchange for their data.

But it's the small business and self-employed segment that generates the most revenue, and it's also growing the fastest.

The company had $1.38 billion in other revenue, including $865 million from Credit Karma.

Notably, revenue growth in the Quickbooks online accounting sub-segment outpaced overall growth. This part of the enterprise includes the bookkeeping products most popular with small businesses, so its top-line gains could mean more people have taken the plunge into proprietorship in the last 12 months -- a sign of stronger confidence in the economy.

Intuit delivered $9.74 per share in non-GAAP earnings for its 2021 fiscal year, which ended July 31, representing 23.9% growth compared to fiscal 2020. For Intuit, the non-GAAP result is a more useful measure than the GAAP figure because the company had substantial one-time costs. Using non-GAAP results allows the company to exclude those non-recurring expenses, which in this case offers a clearer picture of its overall performance.

With a share price of $552 as of Thursday's close, the stock was trading at 56 times fiscal 2021 earnings. That looks expensive compared to the broader Nasdaq 100, which trades at an average P/E ratio of 35. However, there might not be a better way to play the small business comeback. If you're optimistic about the economy over the long term, Intuit is a great bet.

Bill.com is the ultimate payment management platform for businesses, and it's hosted in the cloud, so its clients can take action from anywhere, on multiple devices. 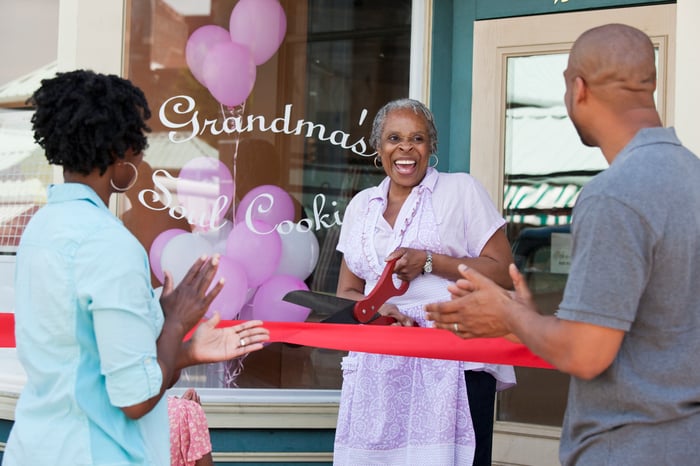 Businesses send and receive numerous invoices, and those occasionally get missed, lost, or routed to the wrong destinations. Bill.com's digital inbox routes all a company's invoices into one place, and gets them paid with a single click. Plus, it integrates with bookkeeping software to automatically log the transactions.

Bill.com targets small to mid-sized businesses both directly and through its partnerships with 85 of America's top 100 accounting firms and six of the 10 largest U.S. financial institutions. That strategy paid off in a big way in its fiscal 2021, with powerful growth in revenue and in payment volume on its platform.

But for its fiscal fourth quarter, which ended June 30, revenue growth was even stronger, suggesting there's an acceleration occurring as the broader economy heats up.

However, investors should be most excited about the company's fiscal 2022 guidance. Bill.com estimates it will generate up to $480 million in revenue, which would represent more than 100% growth.

The company isn't profitable yet, but analysts expect it will come close to breaking even in fiscal 2022. On a price-to-sales basis, the stock looks expensive, trading at a multiple of 76 -- but it looks a bit more reasonable at 38 times fiscal 2022's revenue estimates. And with high gross margins, the stock might look like an even better buy for long-term investors on a P/E basis once profits do arrive.

Intuit's Two-Toned Success Is Both Acquisitions and Organic
376%