But here's the good news: No one will ever pay that.

From the day before Sir Richard Branson took his rocket-ride to space, to the day the company that carried him there, space tourism company Virgin Galactic (SPCE -1.15%), reported its second-quarter 2021 earnings, the stock lost 36% of its value. From the day earnings came out to today, the stock has lost a further 17%. Combined, these losses have cost Virgin Galactic shares nearly half their value in the course of just a month and a half.

But is this decline justified? Is it fair? 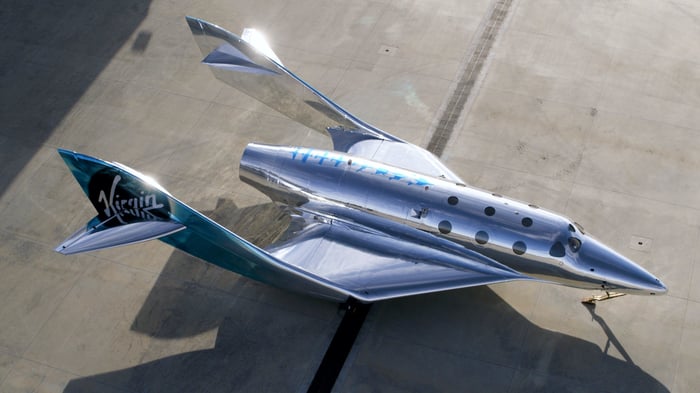 Our business has hit some bumps, so ... let's double our prices!

One view of Virgin Galactic holds that the decline is not justified, and that investors are overreacting to the short-term growing pains the company is enduring today, necessary to build a long-term future.

As Virgin Galactic explained, the reason it is upgrading its mothership, VMS Eve, is to qualify it (and other motherships like it) to fly as many as 100 times in a row before requiring significant maintenance. These improvements will push back the start of commercial flight operations into late 2022, but for a space company that plans to eventually launch as many as 400 times a year, this is a necessary investment in both money and time.

Virgin has also announced that it will increase ticket prices -- currently believed to be in the range of $250,000 a ticket for the company's first 600 customers -- to a minimum of $450,000 per ticket for future customers. If this plan holds, Virgin Galactic could nearly double the revenue it takes in per flight to just under $3 million, and correspondingly shrink the cost of replacing the engines on its spaceplanes (after each flight) to just less than 10% of per-flight revenue -- from nearly 17% currently.

A textbook example of how (not) to scale up a business

But is raising prices a wise business strategy? I mean, we've already heard that Virgin rival Blue Origin has pre-sold $100 million worth of tickets for flights to space aboard its New Shepard suborbital rocket. Although Blue hasn't revealed its ticket price (or to whom it sold those tickets), $100 million at $250,000 per ticket, for example, would imply Blue has only sold about 400 tickets -- fewer than Virgin has sold.

If Blue has sold at least as many as the 600 tickets Virgin has, on the other hand -- not an unreasonable presumption, given that Blue Origin is closer to launching a commercial service than Virgin is -- then its ticket prices might be as low as $167,000 apiece. And if Blue has sold more tickets than Virgin, then Blue's prices might be even lower!

In that case, Virgin Galactic's decision to raise prices makes it easier for its rival to undercut Virgin on price, steal market share, and grow its business to accommodate more traffic. This, in turn, would make it easier for Blue Origin to lower prices even more, creating a virtuous cycle -- a textbook example of how to scale a business.

I admit, at first glance, the idea of Virgin Galactic getting paid twice as much for its next 600 space tickets, as it charged for its first 600 tickets, seems attractive. But consider:

Even assuming Virgin Galactic can find customers willing to pay the higher price, before it can begin selling those tickets and flying those well-heeled customers to space, it must first carry the 600 customers who already paid $250,000.

How long will that take? Well, consider:

With each Virgin Galactic spaceplane carrying six passengers, Virgin Galactic will have to run at least 100 flights -- successfully -- before it can start charging $450,000.

Virgin's flight cadence should increase over the 2024 to 2025 timeframe as the company adds a new "Delta" spaceplane to its existing fleet of VSS Unity and VSS Imagine, and Credit Suisse sees the company building about two Deltas per year after that. So hypothetically, assume that adding the first Delta enables Virgin Galactic to fly 50% more often in 2024 -- 45 flights. Say two more spaceplanes, added to a five spaceplane fleet, allows Virgin to fly 75 times in 2025.

This implies that it will be early to mid-2025 before Virgin Galactic has completed its first 100 flights at $250,000 per ticket, and can begin cashing in on its new and improved $450,000 ticket price.