The falling cost of solar equipment will be a tailwind for these stocks.

The cost to build a solar power plant has fallen around 90% in the last decade, according to Our World in Data, and costs are only going lower from here. The U.S. Department of Energy would like to reduce costs by another 60% over the next decade, which would make everything from utility-scale solar to residential rooftop solar financially compelling in nearly the entire country. 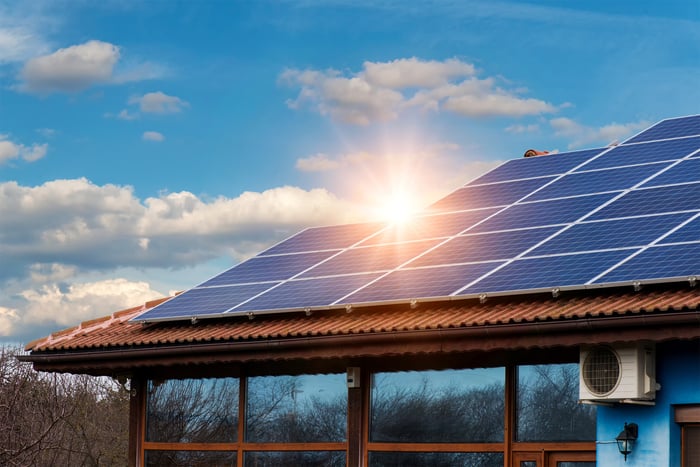 Falling costs are a growing tailwind

Travis Hoium (SunPower): One of the mistakes I've made as an investor over the last decade is thinking that falling costs and rising installations of solar across the world would be good for almost all solar stocks. Falling costs are great for customers, but manufacturers, in particular, have had a hard time making money because the growth in installations hasn't overtaken the drop in prices and margin. And many leading companies ended up in bankruptcy because they couldn't compete with price deflation.

So, as I look at the solar landscape today I want to find companies that can grow recurring revenue as solar costs fall. And the new SunPower could be the perfect company for that. SunPower spun off its manufacturing business last year and is now growing an asset-light technology business that puts together hardware and software in an easy-to-sell package for partner installers across the country. Quotes can be built in minutes and customers can even build their own rooftop solar installations online.

As costs come down, the market for SunPower's solar products should grow. And the beauty of the asset-light model is that the company doesn't have to invest in new manufacturing plants to keep up with growth.

The kicker for me is that falling costs for solar are likely to lead to increased adoption of energy storage in both residential and commercial markets. Utilities are putting rules in place across the country that give an incentive to self-consumption of solar power or values energy storage itself. And SunPower can be the brains behind the solar and energy storage system. That's a long-term service the company is selling to customers and it could be very profitable as the cost of solar falls.

There are definitely risks for SunPower, like competition or regulatory changes, but I think the tailwinds are firmly behind solar and energy storage and if it can get the product mix right SunPower could be one of the industry's leaders long-term.

When a price cut is a windfall

Howard Smith (Sunrun): The Biden administration is aiming to continue to make solar more affordable for Americans, with a goal of growing solar from 3% of electricity generation today to more than 40% by 2035. According to the U.S. Department of Energy, solar costs in the U.S. have declined between 70% and 80% since 2010. That made a typical 6 kilowatt residential system almost $30,000 cheaper in 2020 than it was 10 years earlier.

With costs already rivaling typical electric bill rates in some locations, a further reduction could help tip many homeowners into investing in solar systems. That would be a boon for leading home solar systems provider Sunrun.

In its recently released second-quarter 2021 update, Sunrun said it sees its solar installation capacity growing 30% for the full year 2021, at the high end of its earlier guidance range. For the three-month period ended June 30, Sunrun said its sales volumes increased to record levels, and it delivered record installations.

Tom vonReichbauer, Sunrun's CFO, said 2021 was on track to be a "break-out year" with "accelerating consumer interest." The company says that only 3.5% of the 77 million addressable homes in the U.S. currently have solar systems. It also sees expanding ownership of electric vehicles becoming another growth driver for solar systems, since households with EVs consume approximately double the amount of electricity, according to the company.

The current administration supports an increasing amount of solar residential capacity. Investment tax credits have been extended and won't phase down for residential solar until 2023. Sunrun's shares have struggled this year for several reasons, down about 40% year to date. But with continued federal support, and a return on investment becoming increasingly lucrative for homeowners as costs decline further, Sunrun may continue to experience record installations for some time to come.

A small-cap solar play poised for a rebound

Daniel Foelber (Array Technologies): Solar has been one of the hottest industries in the energy sector, and its scorching growth trajectory remains intact in the U.S. The Biden administration is backing solar as a primary means to reach carbon-neutral power generation by 2035.

Array Technologies, a maker of solar panel ground-mounted tracker systems for large-scale solar projects, saw its share price capitulate after a disappointing first-quarter 2021 earnings report. The report was chock-full of bad news as Array faced higher storage and shipping costs, higher steel prices (which make up a large portion of its costs), and less demand from developers to build new projects.

However, the company was able to show significant improvements in the second quarter by getting a better handle on steel prices so that it could reinstate guidance. Although Array's growth trajectory is certainly dampened from what was hoped for going into the year, the future is bright.

Array has an industry-leading position in solar tracking in the U.S. and is looking to expand globally. As solar costs come down, producers will likely be looking to improve the efficiency of both their existing and new production farms. Array's flagship product is all about improving profitably, a feature that should prove attractive to companies looking to protect their margins.

The fact is that solar energy costs are coming down and installations are going up. But not every company will make money in that environment. SunPower, Sunrun, and Array Technologies may have a chance to use these falling costs as tailwinds.

Why SunPower and Other Alternative Energy Stocks Dropped This Week
360%