And there will likely be many more to come.

When the U.S. government eventually legalizes marijuana, there will undoubtedly be a lot more businesses looking to expand into the growing industry. The current federal ban on pot means that large companies with robust logistical abilities don't generally see the point of getting involved, since marijuana can't cross state lines. But there's hope that with Senate Majority Leader Chuck Schumer leading the charge and pushing for marijuana reform (which includes legalization), significant changes could be coming soon.

And while there are companies from other industries likely waiting on the sidelines in anticipation of making some big moves, other businesses have already made some significant investments into the Canadian pot market, where marijuana is legal at the federal level. Among the most notable names that have already gained exposure to the cannabis industry are Altria Group (MO -2.08%), Constellation Brands (STZ -2.84%), and Alimentation Couche-Tard (ANCU.F). 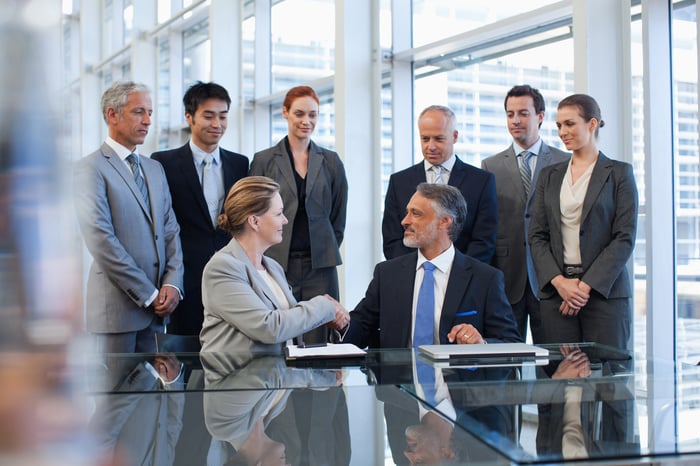 Tobacco maker Altria Group invested $1.8 billion in Cronos Group (CRON -13.43%) in 2018 to take a 45% ownership in the cannabis producer. For Altria, the move made sense in light of slowing tobacco sales. Plus, with the growing popularity of vaping products, it could offer a way to reach a similar customer base. In the same month Altria announced the marijuana deal, it made an even bigger announcement: It was taking a 35% stake in e-cigarette company Juul for $12.8 billion.

While the Juul investment hasn't been great (Altria has written it down multiple times), Cronos still presents some attractive growth prospects for the business that go beyond just vaping. The Canada-based cannabis producer is working on bringing lab-grown marijuana products to market that could help undercut competitors and grab significant market share.

With a company like Altria backing Cronos, the cannabis company is able to benefit from significant research and development capabilities while still having a healthy stash of money to use for growth initiatives; Cronos reported more than $1 billion from its cash and short-term investments as of the end of June 30. Although there's still a bit of risk investing in Cronos given the company's lack of consistent sales growth, the partnership with Altria makes the pot stock a relatively safer buy than many of its peers.

Meanwhile, for a company like Altria, which is already in the highly regulated tobacco market, getting into cannabis is a move that likely won't overwhelm or intimidate its management. Other tobacco companies have also invested in marijuana, including British American Tobacco, which announced it would be taking a 19.9% stake in cannabis edibles company OrganiGram earlier this year.

Another sector that seems like it may be a good match for cannabis is beer. Constellation Brands, known for its Corona brand, was the first big name to invest in the marijuana industry when it announced in 2017 it was taking a 9.9% stake in cannabis producer Canopy Growth. It was a relatively modest investment of 245 million Canadian dollars. Since then, Constellation has poured in billions more and now owns 38.6% of the business.

Cannabis beverages are still in their early stages; analysts project that the segment will be worth just $2.8 billion by 2025, part of a global cannabis market that could be worth more than $90 billion just a year later. But one of the advantages of the investment for Constellation Brands is that while cannabis-infused beverages are in their early growth stages, the company is able to test products in the Canadian market where the products are legal across the country. That way, once the market is fully legal in the U.S., Constellation will have products that are ready to go and won't have to start from scratch.

Canopy Growth is another company that has a boatload of money on its books. As of June 30, it had CA$2.1 billion in cash and short-term investments. Despite its struggles and ongoing transition as it works to get to profitability, like Cronos, it is one of the safer cannabis stocks for long-term investors to buy.

Global convenience store operator Alimentation Couche-Tard, known in the U.S. for its Circle K brand, had been eager to get involved in cannabis for years, even before pot was legalized in Canada in 2018. It was no surprise when the company finally took the plunge in 2019, investing CA$26 million to take a 9.9% stake in cannabis retailer Fire & Flower (FFLW.F -5.00%). At the time of the deal, Fire & Flower had 23 pot shops in its portfolio. As of May 1, that total number was up to 83.

Fire & Flower has plans to grow beyond Canada and is deploying a strategy for the U.S. market. Through a licensing partner known as Fire & Flower U.S. Holdings, there is now a store under the company's brand in Palm Springs, Calif. Fire & Flower has also given the partner (previously known as American Acres) the ability to use its Hifyre technology platform, which helps cannabis retail merchants analyze sales and identify trends.

For cannabis investors focused on the retail market, investing in Fire & Flower -- which is backed by a growth machine like Couche-Tard that has more than 14,000 stores spread across 26 countries and territories -- could lead to some great returns down the road. The retail pot stock has a market cap of just $250 million, and there's loads of potential for it to climb much higher as the company branches out its operations.

1 Surprising Stat That Could Help Jump-Start This Struggling Sector

Could Juul's Problems Make This an Inevitable Move for Altria?

3 Ways to Collect a Dividend With Pot Stocks
366%