Please ensure Javascript is enabled for purposes of website accessibility
Log In Help Join The Motley Fool
Free Article Join Over 1 Million Premium Members And Get More In-Depth Stock Guidance and Research
By Jason Hawthorne – Aug 31, 2021 at 6:10AM

They're all about the future.

Many companies go through transformations. They might change leaders, bring in consultants, and evaluate the organization from top to bottom. It's all in the hope of aligning everyone toward a common goal. It's usually not done in public.

That's not an option when you're a 170-year-old, $263 billion company. It's where Pfizer (PFE 0.73%) finds itself with a relatively new leader bent on reestablishing its scientific roots. So far, so good. And despite a few stumbles, the company appears to be doubling down on the strategy. 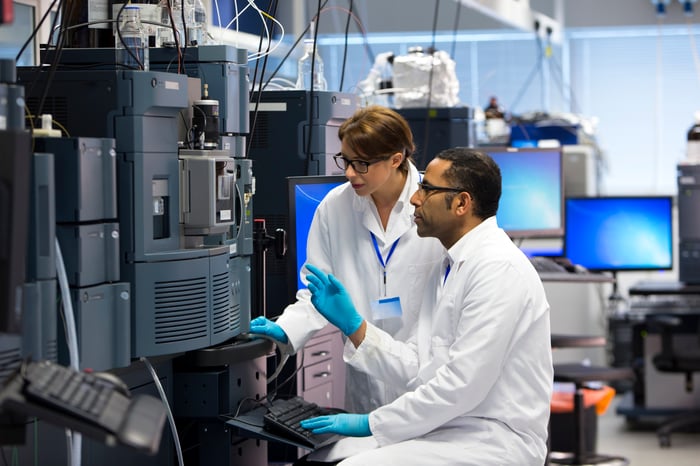 1. A diversified blue chip is changing its stripes

Since CEO Albert Bourla took the chief operating officer role in January 2018, the company has spun off its generics and off-patent drugs in a venture that became Viatris (VTRS -0.72%) and given control of its consumer health business to GlaxoSmithKline (GSK -0.68%) through a joint venture.

It's all part of Bourla's plan to remake the drugmaker into a company focused on creating innovative medicines by way of scientific breakthroughs. One early indication that it is working is Comirnaty -- the messenger RNA (mRNA) COVID-19 vaccine developed with BioNTech (BNTX 4.29%). The drug has filled its coffers. Management expects it to contribute $33.5 billion in revenue this year alone. But it isn't the only innovation driving growth.

In its latest quarter, Pfizer posted 10% year-over-year operational revenue growth even without counting Comirnaty. That's significant. Especially on top of the 6% growth in the same quarter a year ago. The company credited several drugs, as well as its biosimilars segment.

The breadth of disease coverage is an indication of just how expansive the company's pipeline is. That has given Bourla the confidence to commit to 6% top-line growth and double-digit annual increases in profits through the end of 2025. That's outside any impact of Comirnaty. Although the COVID-19 vaccine gets a lot of attention, the rest of the pipeline will go a long way toward determining Pfizer's success over the next decade.

2. There have been some stumbles in its pipeline

Trouble in the pipeline is one reason investors had been down on Pfizer until recently. It's had several high-profile stumbles in late-stage trials over the past 18 months. Two in particular stand out.

The cancer drug Ibrance has been successful in treating metastatic breast cancer. It has grossed $2.7 billion so far this year. Since its launch in 2015, management has pointed to the drug's potential in early-stage forms of the disease. At least one analyst estimated it as an $8 billion market. Yet the drug failed two clinical trials last year that would have opened up the opportunity.

Earlier this year, another of its blockbuster drugs failed to show it was as safe as a competing form of treatment for rheumatoid arthritis. The drug, Xeljanz, is a JAK inhibitor, a group of drugs that has come under scrutiny for both cardiac and cancer risk. Two doses were tested  in the latest study, and they both failed. Bourla has continued to assert that the benefits outweigh the risks.

It's clear that Bourla is committed to the overhaul. That's evident not just by what he has said but also by what he has done. Pfizer is investing more in research, embracing gene-based medicine, and making acquisitions to stay on the cutting edge of cancer therapy.

Between 2011 and 2018, the company allocated about 14.6% of revenue toward research and development. In the two and a half years since, that number has climbed to 18%. Some of the increase may be attributable to helping develop a vaccine for COVID-19. But it's a clear indication that Bourla means what he says.

He has also said that the company will develop future mRNA vaccines by itself. Recall that its primary value in bringing a COVID-19 vaccine to the world was its expertise in manufacturing and logistics. If it can demonstrate the capability to create an mRNA vaccine, it would go a long way toward Wall Street treating the company more like an innovative biotech and less like a stodgy old pharmaceutical company.

Finally, it recently announced it will acquire Trillium Therapeutics (TRIL) for its CD47 assets. Gilead Sciences and Abbvie had acquired similar assets in the past 18 months. It's on the cutting edge of oncology as companies look to block the "don't eat me" signal cancer uses to hide itself from the immune system. It adds one more weapon to the company's arsenal as it sets out to become more associated with the future of medicine than the past.

This COVID-19 Vaccine Stock Has More to Offer
356%