A crowded field could take years to thin out.

The pandemic has brought a new awareness to genetic medicine and scientific research as a whole. Aside from the first authorized vaccine using messenger RNA (mRNA), the past 18 months has also seen a deluge of gene-editing companies go public and the first gene-editing therapy delivered directly inside a patient.

One of the pioneers of the technology is CRISPR Therapeutics (CRSP 0.29%). It's making its own news and positioned to be one of the leading companies in this new era of gene-based medicine. It's fascinating science and a win for humanity. But can the stock help you retire rich? It's one of my favorite companies in the space. But I think the amount of competition might stack the odds against it. Here's why. 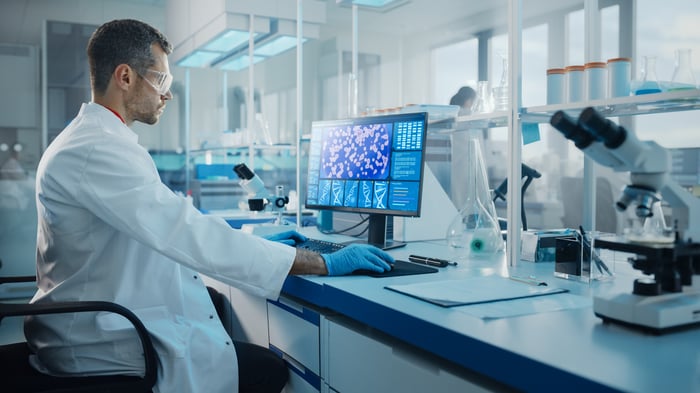 Like many burgeoning industries, there are a lot of companies trying to take the lead. Toss in historically low interest rates and aggressive venture capital firms and the environment can get chaotic. That's how it feels right now. Of course, even a sliver of the $1.3 trillion drug market would provide a payoff worth the potential loss. Bets like that are fine if you don't have all your eggs in one basket. But you shouldn't count on them paying off.

All of the recent activity is making it even harder to choose a winner. A lot of excitement -- and a Nobel Prize in Chemistry -- are associated with CRISPR-Cas9. The approach uses the Cas9 enzyme to cut two strands of DNA at a target location like a pair of scissors.

There is also base editing. It uses chemicals to change a base pair. In that way, it acts more like an eraser and pencil than a pair of scissors. Recently, another alternative called prime editing has come along -- invented by the creator of base editing -- that could offer even more accuracy. There are even less talked about versions of CRISPR like Cas12 and Cas13. Are you confused yet?

Competition will be fierce

It's no less complicated when you list all of the public companies now working with the technology. Some have made amazing scientific advances while others are still in the lab. CRISPR Therapeutics is among those that has made strides.

Early results from the company and its partner Vertex Pharmaceuticals (NASDAQ; VRTX) have shown the CRISPR-Cas9 approach to functionally cure sickle disease and beta thalassemia -- two blood disorders. Recent data shows all 22 of the patients that received its CTX001 drug candidate have responded to the treatment.

Unfortunately, the therapy is cumbersome and involves removing a patient's blood, editing DNA, and reinfusing it. But CRISPR Therapeutics isn't the only company making progress. Another CRISPR pioneer has has success with a much less invasive approach.

Intellia Therapeutics kicked open the door to a new era of medicine earlier this summer when it announced -- along with partner Regeneron Pharmaceuticals (REGN 0.68%) -- it had successfully edited genes inside patients. That's referred to as in vivo. The treatment reduces production of a harmful protein in the liver and the benefits came after just one treatment. It was the first successful application of CRISPR in vivo.

The third of the earliest gene-editing companies to go public -- Editas Medicine (EDIT 1.89%) -- is also making progress. It is focusing on blood disorders like every other company in the space. Those diseases make easier targets. Unlike the other companies, Editas also has an ocular program. Here it is developing in vivo therapies for treating disease of the eye.

Even more companies are raising capital through initial public offerings to catch up. Those include Verve Therapeutics (VERV 6.34%) and Graphite Bio (GRPH 2.04%) which went public in June, and Caribou Biosciences (CRBU 4.91%) which had its IPO in July. Beam Therapeutics (BEAM 2.16%), a company using base editing -- a different and potentially more precise form of gene editing -- went public last February. They are all following the same rainbow looking for the pot of gold.

With so many companies vying for a piece of the pie, it might be a long time before the industry takes shape. That means picking winners and losers is almost impossible at this point. Science is just too unpredictable. That said, one area where CRISPR Therapeutics is demonstrating superiority is its strategy.

Earlier this year, the company agreed to hand over a controlling interest in the CTX001 program to Vertex for $900 million and a potential $200 million payment if it is approved. It has monetized a program where every other gene-editing company is trying to compete. With the deal, the company has boosted its cash to $2.6 billion. That is more than one-fourth of its $9.2 billion market capitalization. A pretty good cushion in a topsy-turvy industry.

The capital should allow it to advance its platform in fighting cancer, kick start its in vivo programs, as well as fund its regenerative program targeting Type 1 diabetes. All three have more potential to pay off for the shareholders than angling to be one of the many treating blood disorders.

But it will take time -- likely years -- before the promise shows up in the financial statements. And a lot can change. That's why despite being one of my favorite companies in the space CRISPR Therapeutics shouldn't be counted on to help you retire rich. Shares of the company should only be owned in a diversified portfolio that includes companies from many industries. The investment could pay off. Meanwhile you'll be able to sleep at night knowing all of your eggs aren't in one basket.

Jason Hawthorne has no position in any of the stocks mentioned. The Motley Fool owns shares of and recommends CRISPR Therapeutics and Editas Medicine. The Motley Fool has a disclosure policy.