Please ensure Javascript is enabled for purposes of website accessibility
Log In Help Join The Motley Fool
Free Article Join Over 1 Million Premium Members And Get More In-Depth Stock Guidance and Research
By Timothy Green – Aug 31, 2021 at 7:45AM

Fading demand isn't the only reason to be wary of the pricey exercise equipment stock.

Delivery vans for high-end exercise equipment company Peloton (PTON 4.87%) were a common sight during the worst of the pandemic. People had limited options when gyms were closed or operating under severe restrictions, so dropping two grand on a stationary bike and another $39 each month for the necessary subscription was easy to justify, especially considering the bike could be financed.

The pandemic isn't over, but consumer behavior is already beginning to shift. Peloton's growth is set to slow way down as it enters its new fiscal year, and the company's full-year guidance makes a lot of assumptions that appear optimistic to me. That's one reason to avoid Peloton stock, but it's certainly not the only one. 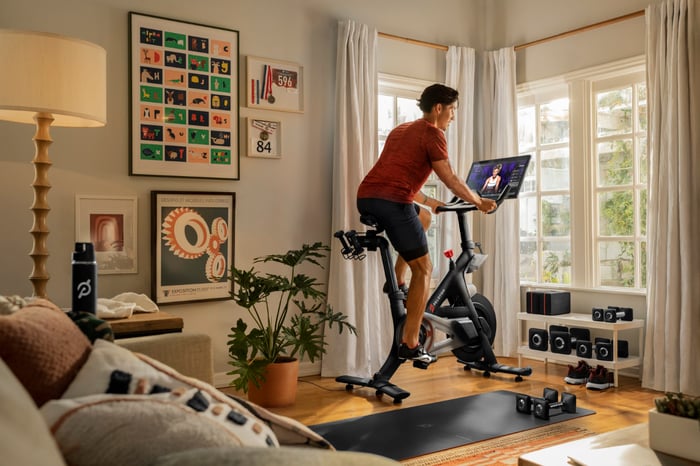 Cracks in the growth story

Peloton grew its revenue by around 120% in fiscal 2021 as demand for its products soared. Fiscal 2022 will be a different story.

Peloton expects to produce $800 million of revenue in the first quarter, up just 6% from the prior-year period. Losses will be enormous -- the company expects to report an adjusted EBTIDA loss of $285 million for the quarter.

Peloton sees demand accelerating as the year goes on, predicting $5.4 billion of sales for the full fiscal year. That guidance represents growth of 34%, which is solid but a far cry from pandemic-era growth rates.

That full-year guidance makes some assumptions that are a little hard for me to get behind. Peloton is banking on strong demand for its bike products across all regions, fueled partly by a price cut, a successful relaunch of its treadmill products following a recall, and continued low churn for its subscription products.

The gym and fitness class industry will certainly look different as the pandemic fades away. But one thing that seems obvious to me is that many people will desperately want to get out of their homes, especially if they're still working remotely. Fitness classes were popular before the pandemic, and they'll be popular after. Perhaps even more popular.

Even with a price cut, interest in home exercise equipment could drop far more than Peloton is expecting. The relaunch of the treadmill is also not a sure thing, considering the continued negative publicity around Peloton's response. And subscription churn could rise as people head back to the gym and use their Peloton equipment less and less. Peloton's assumptions seem overly optimistic to me.

Peloton is slashing the price of its lower-end Bike product by $400 to $1,495. This price cut is one reason first-quarter revenue is expected to be so weak, although Peloton expects the lower price to boost demand. The company is also offering longer-term financing for its higher-end products, which will lower the monthly cost.

The spin Peloton offered was that this price cut was an effort to "democratize access to connected fitness." I don't buy it. Seeing a luxury brand cut prices is a sign to me that it's trying to be high-end and mass-market at the same time. Unless you're Apple, that almost never works.

Peloton disclosed in its fourth-quarter report that it found a material weakness related to the identification and valuation of inventory. It's a minor issue that won't result in any restatements of historical results.

When it comes to accounting, I always assume that where there's smoke there's fire. Peloton is a company worth around $30 billion. It shouldn't be failing at something as routine as correctly valuing inventory.

Peloton's original treadmills were unsafe. The U.S. Consumer Product Safety Commission warned in April that there had been multiple reports that children were being pulled under the treadmill, and that pets and other objects were prone to being pulled under as well. The CPSC urged consumers to stop using the product because of 38 injuries and one death.

Peloton called the warning "misleading and inaccurate." A couple of weeks later, Peloton recalled its treadmills and stopped selling the products entirely. Peloton CEO John Foley admitted that the company's initial response was a mistake.

A valuation that's tough to justify

Shares of Peloton have already dropped around 40% from their 52-week high, but the stock is still extremely expensive. With a market capitalization of roughly $31 billion, shares trade for almost 6 times the full-year sales guidance.

Peloton was turning a profit when demand was at its highest, but the company expects to post a big loss in fiscal 2022 as it tries to boost growth. If Peloton's sales guidance turns out to be overly optimistic, the decline in the stock price so far may be just a preview of what's to come.