Please ensure Javascript is enabled for purposes of website accessibility
Log In Help Join The Motley Fool
Free Article Join Over 1 Million Premium Members And Get More In-Depth Stock Guidance and Research
By Jamal Carnette, CFA – Sep 1, 2021 at 9:29AM

These three companies cut monthly checks for their investors.

The COVID-19 recession was surprisingly mild. The sharp initial downturn officially lasted only two months, and many workers emerged with more money and better job prospects than ever before. For a comparison, the Great Recession lasted 18 months.

The biggest difference was a change in government focus. Instead of only top-down corporate bailouts, the government sent money directly to Americans. All told, Uncle Sam mailed nearly $1 trillion in stimulus checks.

Stimulus checks were not only effective but wildly popular. A Morning Consult poll reported that 79% of all voters approved of the $1,400 stimulus payment. The bad news is that it appears stimulus checks are over. The good news is that investors can create their own stimulus-like income streams by investing in these three monthly dividend-paying companies. 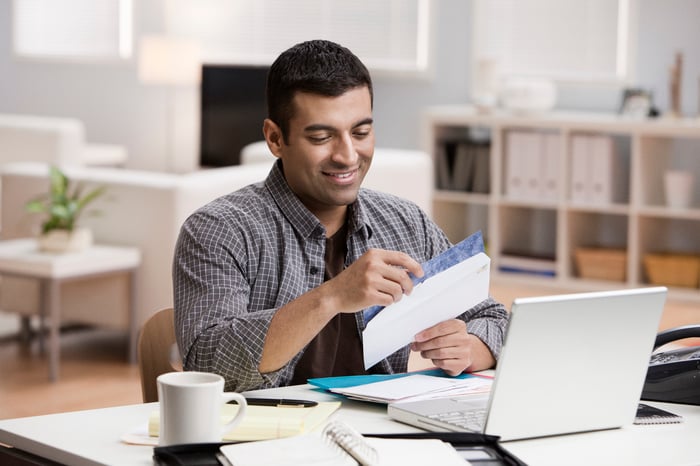 Stag Industrial (STAG 0.15%) shares have been on fire this year, up 34% as of this writing. The industrial real estate investment trust (REIT) owns over 500 buildings totaling more than 100 million square feet across 39 states. Shares currently yield 3.5%, paying investors $1.45 per year or $0.1208 per month for each share they own.

Bears argue that the company's operations are overexposed to e-commerce and the reopening will lessen demand for its buildings. While it's true Stag's largest tenant is Amazon, the company represents less than 4% of its total revenue. Overall, less than half its total rental portfolio is e-commerce, which means it has ample exposure to brick-and-mortar as well.

The second argument is that the company is now expensive by historical valuations and is priced for perfection. Despite that, Stag's discipline and savvy management deserves to trade at a premium. Stag avoids large and pricey markets like New York City and Los Angeles, and focuses on mid-tier regions like Pittsburgh, Pennsylvania and Greenville, South Carolina. On the innovation front, the company is adding solar panels to its buildings to help tenants meet their carbon neutral goals while increasing its revenue.

Stag will continue to grow its funds from operations (FFO) to pay and raise the dividend. In the second quarter, management guided for FFO to be $1.97/share this year, more than enough to pay the current dividend with ample room to raise common payouts next year, something it's done every year since going public in 2011.

Realty Income (O 0.51%) appears better situated for the return-to-normal environment. All told, the commercial and retail REIT owns nearly 7,000 properties in all 50 states and rents to 630 tenants, including well-known companies like Dollar General, 7-Eleven, Walgreens, and Kroger.

Realty Income has a long history of payouts, recently declaring its 614th consecutive monthly dividend. Investors can expect dividends to be raised quarterly, as Realty Income recently announced its 111th dividend increase since its public listing in 1994.

In REITs, reputation matters. Realty Income has a long-standing history of being a high-quality landlord. Because of its history, the company gets its pick of stable tenants like those mentioned above.

In fact, 12 of Realty Income's 20 largest tenants have investment grade credit ratings, which was important last year as the pandemic forced many smaller companies to close stores and go out of business. Realty Income's occupancy rate fell less than one percentage point to 97.9% and has since rebounded.

In fact, Realty Income emerged from the pandemic stronger than before. The company announced it was acquiring smaller competitor VEREIT in an all-stock transaction. Realty Income's own investment grade rating will allow the company to refinance VEREIT's higher-interest debt and pass along added profit to shareholders with more dividend hikes.

Like Stag Industrial, shares of Realty Income trade at the higher end of its historic range. Currently the company yields 3.9% and trades at 20.3 times 2021's adjusted FFO. However, for investors looking for a safe high-yielding stock in a near zero-rate environment, Realty Income should be on your watchlist.

Unlike Realty Income or Stag Industrial, Broadmark Realty Capital's (BRMK -0.95%) primary business isn't in owning property. Instead, its primary asset is in the underlying financial products needed to acquire the properties. The company is a mortgage REIT (mREIT), but differs from others in the space like Annaly Capital and AGNC Investment Corp.

Other mREITs primarily buy agency mortgages that are underwritten by others and have no credit risk, while Broadmark is considered a "hard-money" lender, providing shorter-term construction loans that traditional banks tend to avoid.

The upside is that these loans are more lucrative, with an average interest rate of 11.6%, which prevents Broadmark from having to lever up its own balance sheet to make a significant profit. In fact, Broadmark has no outstanding debt on its books at all.

The downside is that it is exposed to the credit risk and execution risk of its borrowers, but Broadmark is well-protected by lending only 65% of the property value, requiring shorter payback terms, and its existing relationships with successful developers. As of the second quarter, the company has reported a loss rate of only 0.2%.

Despite the innovative model, investors continue to overlook the company. Shares currently pay $0.84 per year, or $0.07 per month, for a dividend yield of 7.9%.