Please ensure Javascript is enabled for purposes of website accessibility
Log In Help Join The Motley Fool
Free Article Join Over 1 Million Premium Members And Get More In-Depth Stock Guidance and Research
By Daniel Foelber – Sep 2, 2021 at 10:33AM

With the stock market hitting new all-time highs seemingly daily, an annual dividend yield of 1% or 2% may appear a bit paltry. Even top-tier dividend stocks may struggle to outperform the broader benchmarks when Wall Street is in mega-growth mode. But dividends can be a financial safety net during market corrections, generating income that investors can tap without having to sell stocks when they're down.

This dynamic makes high-yield dividend stocks a great way to balance out a portfolio -- and leading defense contractor Lockheed Martin (LMT 0.50%) is among the best of them. 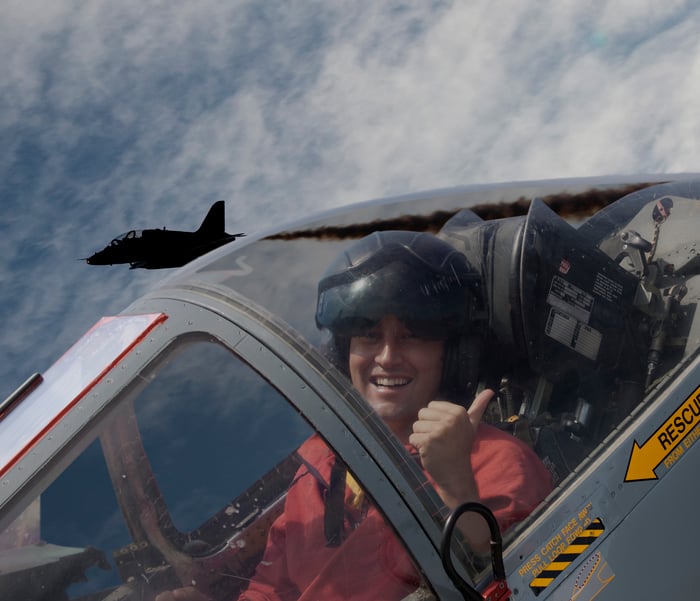 A diversified and industry-leading business

A dividend is only as good as the company paying it, and Lockheed Martin has proved it can generate stable cash flows and earnings to support its payout. Its top customer -- by far -- is the U.S. government, which accounted for 74% of 2020 sales. International customers (approved U.S. allies) accounted for another 25%, while the remaining 1% came from U.S. commercial and other customers. Lockheed's contracts operate on multiyear sales cycles, which gives its business stability. Its current project backlog amounts to a near-record $141.7 billion, which is more than two years' worth of sales.

Deep involvement in Pentagon programs. makes Lockheed dependent on Department of Defense spending. Data from the U.S. House Appropriations Committee suggests that Defense funding for fiscal 2022 will be just 1.5% above fiscal 2021 levels -- a growth rate that doesn't match recent inflation rates. Yet Lockheed has shown time and time again that it can grow its top and bottom lines at higher rates than U.S. defense spending. After initially forecasting 2021 revenue growth of just 2%, Lockheed is now guiding for around 4% top-line growth and double-digit percentage diluted EPS growth.

Lockheed's consistent performance underpins its value as a quality dividend stock in that it can post quality results (even during events as disruptive as the COVID-19 pandemic) and generate ample cash to support dividend payments. Earlier this year, Lockheed raised its quarterly dividend to $2.60 per share, giving it a yield of 2.9% at today's share price.

The main question looming over Lockheed Martin is how it will perform in a prolonged period of stagnant defense spending. Although its backlog is large, it still needs to be replenished with more contracts sooner rather than later. And if those contracts are smaller and harder to come by, Lockheed's growth rate could decline.

Lockheed can't control how much the U.S. government spends on defense, but it can stay ahead of the curve by funding programs that Washington could support in the future. In addition to making new and improved products and upgrading legacy equipment, the company has a few exciting programs that have garnered the attention of growth investors like Cathie Wood, the CEO of Ark Invest. Lockheed Martin is the ninth-largest holding in the Ark Autonomous Technology & Robotics ETF (ARKQ 0.11%) and the sixth-largest holding in the Ark Space Exploration & Innovation ETF (ARKX). The ongoing importance of satellites for detecting incoming missile launches and the rise of hypersonic missiles are two drivers that could drive growth for Lockheed's space division. 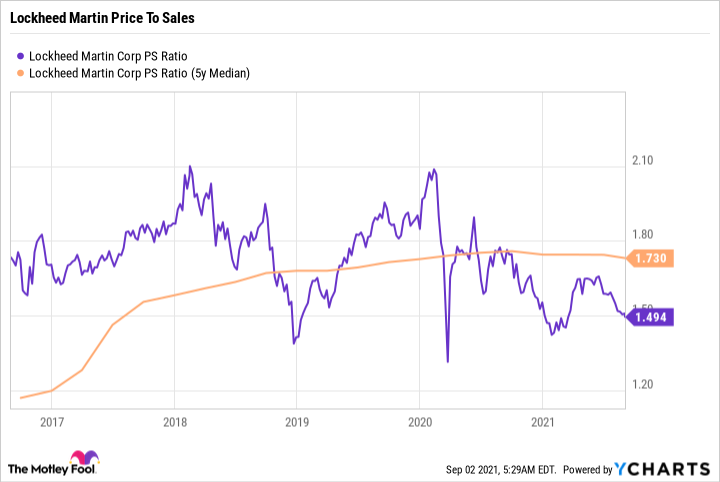 Lockheed's stock price has languished as its earnings have increased, which has lowered its price to earnings (P/E), price to sales (P/S), and price-to-cash-flow-from-operations (P/CFO) ratios. 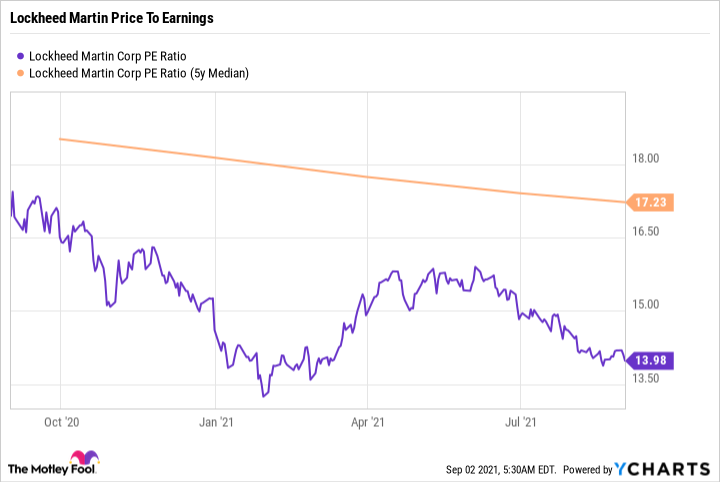 Today, all three financial metrics are below their five-year median averages. Given the company's low growth rate, the stock arguably deserves to have a lower valuation than the broader market. But a P/E ratio of 14 is bargain-bin territory for a company of Lockheed Martin's size and influence. 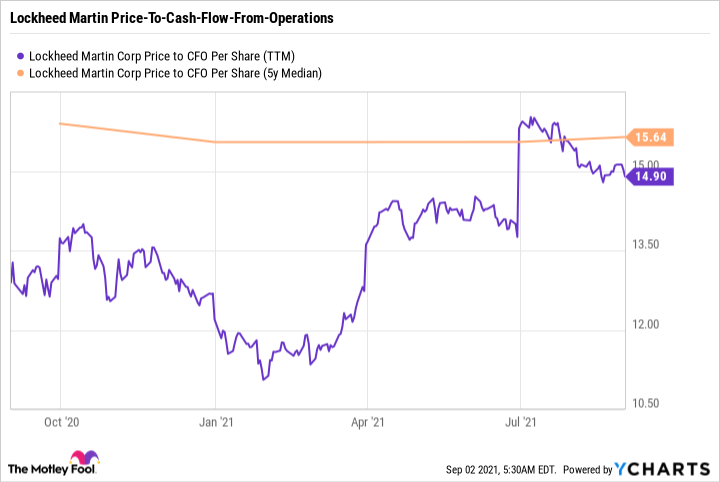 LMT Price to CFO Per Share (TTM) data by YCharts

Even with investments in its space division, it's unlikely that Lockheed will be a fast-growing company anytime soon, but it doesn't have to be. The investment thesis for this stock is centered around income and value, not growth. The company's track record of raising its dividend and its current low valuation means it has these two categories in spades. In today's market, it's hard to find large and stable industrial company stocks as cheap as Lockheed -- and this one comes with a dividend that yields 2.9% to boot. Income investors looking for a solid dividend stock to round out their portfolio could do well by opening a position in Lockheed Martin.