Despite recent gains, the company's share price trades down roughly 16% year to date.

Shares of Just Eat Takeaway.com (JTKWY -4.19%) are up roughly 8.5% in this week's trading. The food ordering and delivery stock is making gains following confirmation that it will be leaving the FTSE 100 index.

The company, which acquired Grubhub this year, is set to be removed from the index on Sept. 20. The exact mechanics of why departing from the index is pushing the stock higher are a little hazy, and it's likely that overall market momentum is also a significant factor in the gains this week. The Nasdaq Composite index is currently up 0.44% on the week. 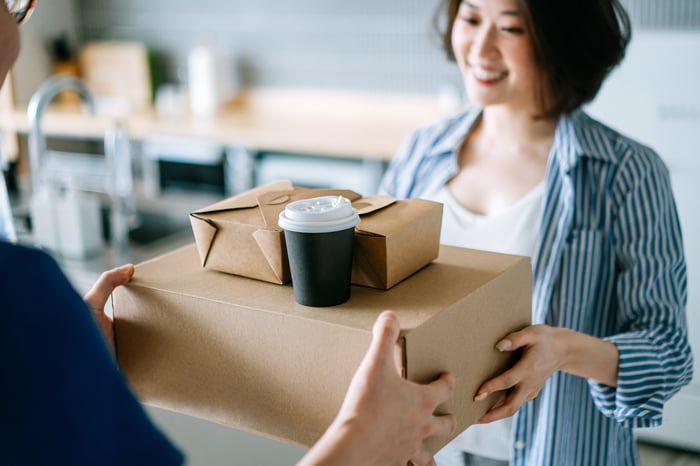 Just Eat Takeaway's continued inclusion in the FTSE 100 index for London-based equities has been a source of uncertainty for months. FTSE Russell, which runs the index, has relatively strict rules for inclusion, and Just Eat Takeaway.com's recent mergers and acquisitions had raised questions about whether it qualified for inclusion.

U.K.-based Just Eat merged with Netherlands-based Takeaway.com last year in a $7.6 billion deal. The subsequent acquisition of Grubhub only complicated matters further. After conducting its review, FTSE Russell decided that the food delivery specialist was a Netherlands-based company. After months of "will they or won't they" developments on the FTSE 100 listing front, Just Eat Takeaway.com shareholders may have been happy to be done with the drama.

Being delisted from the FTSE 100 probably won't have any material impact on its business. Being included in major indexes can often benefit stocks because investors who buy funds that track those indexes are also buying the component stocks, but funds tracking the FTSE 100 have attracted relatively little investment compared to those tracking the Nasdaq 100 and the Nikkei 225.

Just Eat Takeaway now has a market capitalization of roughly $20.5 billion and trades at approximately 3.5 times this year's expected sales.

Will Either of These Delivery Stocks Turn Profitable Anytime Soon?
376%