As the pandemic took over global consciousness, companies pursuing vaccines became the stars of the stock market. Moderna (MRNA -1.36%) and Pfizer (PFE -2.01%), along with its partner BioNTech (BNTX -3.05%), were the first to have jabs authorized by the Food and Drug Administration. As a result, their stocks skyrocketed.

With vaccinations rolling out and the end of the pandemic seemingly in sight, many have felt the stocks were significantly overvalued. I include myself in that camp. However, a new development might prove the doubters wrong. And it could mean shareholders have plenty more to gain. 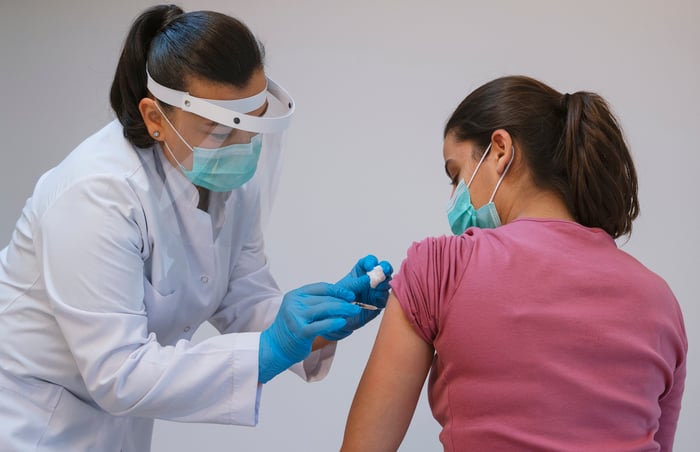 The COVID-19 vaccines have already been a windfall

It's no secret that the COVID-19 vaccines have brought riches to the companies first to receive authorization. And each has offered impressive guidance for 2021 because of the drugs. They have also projected billions of doses for this year and next.

Most analysts believe next year will look similar to this year. With rich countries reaching saturation of initial vaccinations, additional jabs will be applied for boosters and sent to low- and middle-income nations. But a new version of the virus could throw a monkey wrench in those projections. And it could mean starting the pandemic all over again in 2022.

A new variant could mean a repeat of 2020

The World Health Organization is concerned about a variant of the novel coronavirus that originated in Columbia earlier this year. It has been spreading, but not like some of the other mutations. It is still only 0.1% of the world's cases, but that differs by geography -- it represents 39% of cases in Columbia and 13% in Ecuador. And as we've seen over the past 18 months, infectious diseases can spread rapidly.

It is called the mu variant -- formally B.1.621 -- and it may be resistant to vaccines, as well as any immunity developed from previous infection. It is unlikely that it is more transmissible than the delta variant, but it has many mutations that are causing concern among scientists. It has been detected in 40 countries including the U.K.

Still another variant -- called C.1.2 -- was detected in May in South Africa. Researchers also believe that version is better at evading vaccines in addition to being more transmissible. They have stated this new South African variant contains more mutations than any other version of the virus first detected in Wuhan. So far, C.1.2 has been detected in only seven countries including England and China.

That could propel the stocks meaningfully higher

As it stands, Moderna and BioNTech each trade at what appear to be depressed multiples of earnings. That's because Wall Street doesn't expect the COVID-19 vaccine windfall to last. It's obvious when comparing the two with some other large drugmakers. 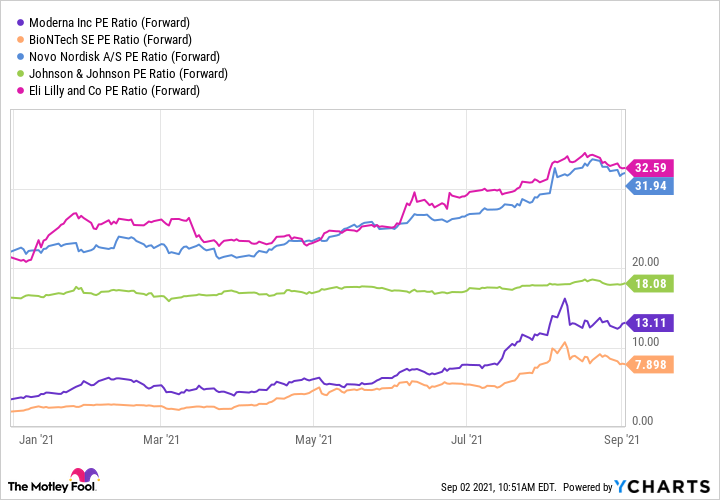 If another wave of vaccine development and distribution is needed for a new variant, Wall Street is going to need to update its model. It would mean the demand for jabs will be around for years to come. And in that case the vaccine makers should be treated like other drug companies.

For instance, Novo Nordisk makes drugs to treat diabetes. That makes its sales very predictable. It posts annual revenue of about $20 billion per year and has profitability similar to Moderna and BioNTech. That makes it a good comparison. Note from the chart above that it trades at a forward price-to-earnings (PE) ratio of 32. That's more than twice Moderna's forward PE ratio and four times BioNTech's. If either of the vaccine makers close that gap it could be a boon for shareholders.

For now, investors should keep abreast of the latest developments and stay diversified. The future is unpredictable. Just like these new variants could make the stocks a great buy right now, they could end up having no impact at all. One thing is certain, with every new variant the likelihood of a redo of the pandemic increases. That would be bad news for the world but great news for shareholders of Moderna and BioNTech.