Please ensure Javascript is enabled for purposes of website accessibility
Log In Help Join The Motley Fool
Free Article Join Over 1 Million Premium Members And Get More In-Depth Stock Guidance and Research
By Adria Cimino – Sep 3, 2021 at 6:00AM

Boosters should deliver good news in the near term and the long term.

Coronavirus vaccine leaders Pfizer (PFE 0.33%) and Moderna (MRNA 1.10%) have been talking about the need for booster shots for a while. As a matter of fact, that's been the subject since they both brought booster candidates into clinical trials earlier this year. Then, in August, Pfizer became the first to submit its candidate to regulators. And just this week, Moderna made its request.

Now, it's up to the U.S. Food and Drug Administration to decide whether to grant the boosters Emergency Use Authorization. At the same time, health officials recently said they're preparing to offer boosters as of Sept. 20 to any individual who completed full vaccination at least eight months earlier. Let's take a closer look at how this booster plan may impact Pfizer and Moderna. 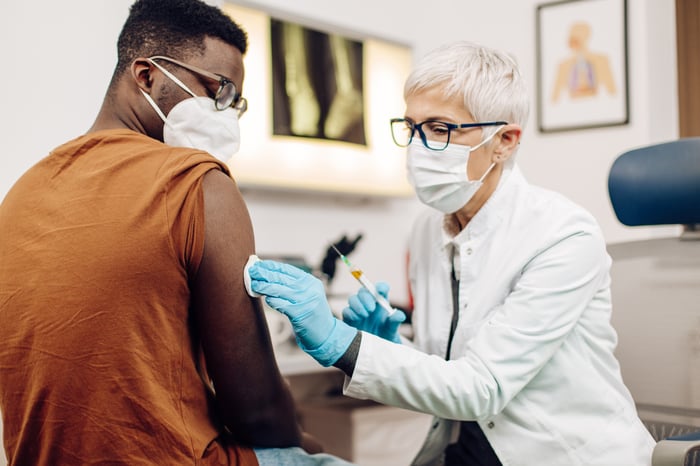 First, let's back up a bit. Earlier this summer, health authorities said fully vaccinated individuals didn't need booster shots. But that was then, and this is now. Since, the delta variant gained ground. And cases, hospitalizations, and deaths have soared. As a result, the Department of Health and Human Services (HHS) changed its position on boosters.

Does this mean rollout will happen no matter what the FDA says? No. The booster plan is "subject to FDA conducting an independent evaluation and determination of the safety and effectiveness of a third dose of the Pfizer and Moderna mRNA vaccines," according to HHS. Right now, U.S. health agencies are simply getting ready to begin the rollout if the FDA grants authorization.

The next question is this: Is the FDA likely to authorize the boosters? I'm optimistic. Both Pfizer and Moderna have opted for the smoothest route. They've tested and submitted data on an extra dose of their already authorized vaccines. In Moderna's case, the extra shot would be at a lower dose -- 50 micrograms. That's instead of the 100 micrograms used in the two-dose regimen.

It's clear that these candidates may make it through the review process more quickly than would something entirely new.

(Moving forward, we may see other potential products from these vaccine leaders. Moderna has been working on two other booster possibilities. It's investigating a strain-specific booster candidate. And it's testing that candidate combined with its authorized vaccine. Pfizer said in late July that it soon would start a trial for an updated vaccine candidate targeting the delta variant.)

Getting back to my optimism... The FDA has planned an advisory committee meeting to discuss the Pfizer submission on Sept. 17. That's three days before the U.S. booster program is set to begin. As we saw with vaccine authorizations, the FDA issued decisions almost immediately after the committee meetings. So, it looks like the FDA is making efforts to get the program rolling on time.

The pressure is on the FDA to give the boosters a nod -- and quickly. Of course, that's only if the data are strong. The FDA isn't likely to authorize a candidate with poor safety or efficacy results. But I'm encouraged by the positive data we've seen so far. Both companies say their shots in clinical trials significantly increased neutralizing antibodies. Those are the antibodies that block infection.

Now, let's imagine the FDA authorizes the Pfizer and Moderna boosters. How will that impact the companies? The move would offer them a chance to fully demonstrate the performance of their vaccines. Recently, there have been a lot of reports of waning immunity, and that may discourage some individuals from going for a vaccine. But Pfizer and Moderna predicted immunity would wane between six to 12 months post-vaccination. And that's exactly what's happening. They both said boosters would be necessary as part of the vaccination program. With an approved booster, the companies will have the opportunity to show the strength of the two-dose-plus-booster regimen. And that may encourage more people to get vaccinated or go for a booster.

Three instead of two

Even without that scenario in mind, the authorization of a booster means an increase in demand for vaccine doses. Instead of two doses, each individual will need three. That's additional revenue for Pfizer and Moderna. The extra revenue won't come right away, however. The U.S. already has signed supply contracts with both companies for doses through the first quarter of next year. These agreements cover boosters too. Each company is supplying the U.S. with 500 million doses of vaccine product. That should cover vaccination and boosters for the entire population right now.

But for future series, the U.S. will have to place new orders -- and three shots instead of two should lead to higher revenue for Pfizer and Moderna.

So, the U.S. booster program is a big opportunity for Pfizer and Moderna. It's likely to help these vaccine giants gain the confidence of individuals and healthcare providers in the near term. And in the long term, it could help grow revenue. That's why it's important for investors to carefully watch this upcoming part of the coronavirus vaccine story.