The world's second-largest cryptocurrency has way more use cases than Bitcoin and may be a better long-term investment.

Ethereum (ETH -1.48%)- the world's second-largest cryptocurrency, and the most popular smart contract and decentralized application network -- just changed the way it pays the people who maintain its network, in ways that could make it an even more appealing investment. When the next major evolution in its upgrade roadmap occurs, this change could reduce its supply and increase its value. That might be great news for investors seeking to hedge against inflation.

How Ethereum's changing its network

Since Aug. 5, a portion of the fees paid by users of Ethereum's network, which used to go toward making new coins with which to pay miners, has instead been burnt or destroyed. A total of 177,424 ETH, worth around $672 million at the time of writing, has been taken out of circulation since the upgrade, leaving 117.3 million tokens in circulation according to CoinMarketCap. By taking coins out of circulation, this change could make each existing coin more valuable.

Ethereum is currently produced by miners under a proof-of-work consensus mechanism that consumes a lot of energy, just like Bitcoin (BTC -0.36%) production. It has a variable annual inflation rate of around 2.8% at the moment -- but it'll issue fewer new coins when it upgrades its network to a staking-based consensus. 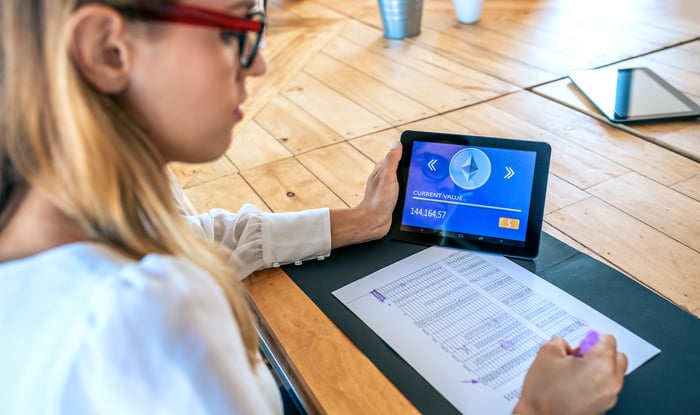 Instead of solving tough math problems to keep the network running smoothly -- and getting rewarded for it -- Ethereum holders will be able to do the same things by storing away, or staking, some or all of their tokens. Around 6.2% of the circulating supply, or 7.4 million ETH tokens worth an estimated $28 billion, have already been staked. That staked ETH is currently earning an annual percentage yield of 5.8%, way more than any bank.

Once Ethereum's major upgrade occurs sometime in late 2021 or early 2022, one simulation estimates that the circulating supply of Ethereum could shrink by around 1.4% each year at current rates of fee burning. In theory, that might reduce the value of each token by an equal proportion. This means that the circulating supply of the asset will shrink.

Ethereum has way more use cases

Bitcoin is currently viewed as a store of value, or a safe haven asset to hedge against inflationary fiat currencies. But Ethereum is more of an economy -- a fledgling financial landscape for the internet.

Aside from staking, Ethereum is also the foundation for decentralized finance protocols, many of which are based on Ethereum and its smart contracts. These smart contracts, which run on the blockchain and execute when predetermined conditions are met, are also used to build decentralized applications (dApps).

Investors currently have 7.7 million ETH, or $29 billion, locked up in DeFi protocols for token swapping, yield farming, or liquidity mining. This is where token holders can provide collateral in crypto assets to earn more crypto assets.

Ethereum is also the standard for the majority of nonfungible tokens, or NFTs, which have been booming in sales this year. NFTs are unique tokens on the blockchain that prove ownership; they can represent art, music, gaming items, avatars, and even real estate.

Additionally, Ethereum is the base layer for stablecoins -- digital assets pegged to a fiat currency. Around half of the world's most popular stablecoin, Tether (USDT), is based on the Ethereum standard, with $34 billion worth residing on the network.

There's just one drawback to Ethereum's current popularity: Rising demand has inflated network fees, with the average transaction now costing $40. The currency's upcoming upgrade includes other improvements designed to lower those fees and speed up transactions, but for now, the higher fees make it harder for people and other apps to actually use Ethereum.

Why big banks are buying in

Ethereum's strengths compared to Bitcoin have driven Ethereum prices 400% higher since the beginning of 2021, compared to just 70% for Bitcoin.

Major institutions such as Grayscale have taken notice, and they're loading up on ETH. Institutional funds offer wealthy clients exposure to the asset without requiring them to hold it, and Grayscale currently holds $10 billion worth of ETH in its Ethereum Trust (ETHE -4.64%).

Even some of the big Wall Street banks have leaned bullish on Ethereum. In July, analysts at investment bank Goldman Sachs said that Ethereum's real use cases give it the potential to become the dominant digital store of value in the coming years.

The network may also be viewed as a more environmentally friendly investment when it moves away from mining, which looks good to eco-conscious corporations.

Coupled with the prospect of supply deflation, these factors could drive an uptick in demand and prices. That trend might only grow stronger if the COVID-19 pandemic spurs inflation and currency devaluations on a global scale.

Increased regulation in the U.S., such as the controversial crypto tax reporting bill, could stifle innovation and mainstream Ethereum adoption in the short term. There is also the threat of faster rival blockchains such as Cardano or Polkadot becoming the de facto standard for smart contracts, DeFi, and dApps.

These networks have gained traction recently as the crypto ecosystem expands, but Ethereum has already cemented itself as the industry standard, just as IBM did with computing in the early 1980s. With so many platforms already running on Ethereum, and it having the largest support and developer community, it will be no mean feat to knock the network off its perch.

With this in mind, now might not be a bad time to buy and hold Ethereum for at least couple of years.