These growth stocks could help you chart a path to financial independence.

In a recent report, trustees said the Social Security trust fund would be depleted by 2034, a year earlier than expected. That sounds alarming, but it doesn't mean Social Security is going to disappear. Instead, the program -- which is currently funded by payroll taxes and interest from the trust fund -- will pay out funds solely with tax revenue after 2034.

So what does that mean? As things currently stand, retirees can expect to receive 78% of scheduled benefits in 2034, and 74% by the time 2095 rolls around. Of course, things could change in the next decade -- Congress has the power to set things straight. But now still seems like a good time to revisit your retirement strategy, especially if you were banking on a big Social Security payout. 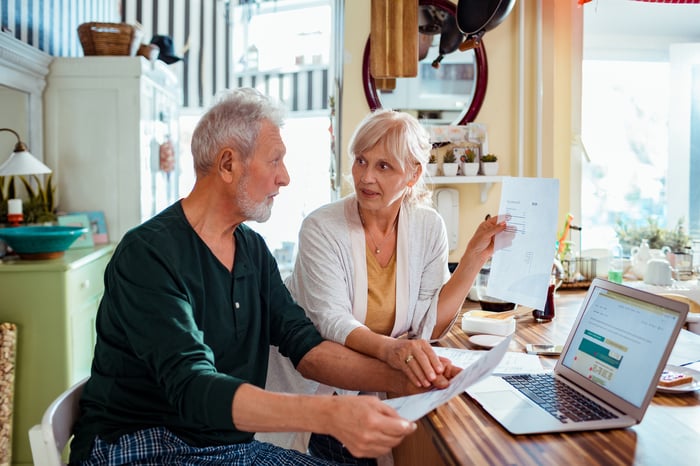 Specifically, if you still have at least a decade or two before retirement, use that time to make yourself more financially independent. Try to save a little extra money each month, then contribute those funds to an individual retirement account (IRA) or a brokerage account. Personally, I choose to invest in stocks; but index funds may be a better fit for some people and that's OK! They're both great ways to build wealth.

If you choose to buy individual stocks, it's important to do your research. Look for high-quality businesses, build a diversified portfolio (at least 20 stocks), and plan to stay invested for the long term (at least five years). Here are two stock ideas to get you started.

The future of commerce is omnichannel, and Shopify (SHOP -4.46%) is capitalizing on that trend. But unlike Amazon's marketplace, this company helps businesses build their own brand, giving merchants the tools to manage sales across physical and digital storefronts. Shopify also provides services like payment processing, discounted shipping, and financing, making its platform an end-to-end solution for modern commerce.

As of December 2018, Shopify had 820,000 sellers on its platform, but that figure more than doubled to 1.7 million by the end of 2020. This reflects the importance of management's merchant-first growth strategy, but empowering businesses to build their own brand is only the tip of the iceberg.

In 2019, the company debuted the Shopify Fulfillment Network; this is an array of warehouses that spans the U.S., leaning on artificial intelligence to help sellers deliver orders more quickly and cost effectively. From a broader perspective, this move helps Shopify-powered small businesses compete with logistics titans like Amazon.

As you might expect, Shopify's financial performance has been quite impressive.

Looking ahead, management puts its market opportunity at $153 billion, but that figure should get bigger in the years ahead.

Shopify recently announced that Shop Pay -- its accelerated payment platform -- would be available off-platform in the near future. By the end of 2021, all sellers on Alphabet's Google and Facebook will be able to accept payments through Shopify, even if they aren't Shopify clients, helping the company capitalize on the growing digital payments industry.

The future of the automotive industry is electric and autonomous, and Tesla (TSLA -1.44%) is a key player in both cases. In fact, Tesla is the leading electric vehicle manufacturer worldwide, capturing 15.2% market share through the first half of 2021. And CEO Elon Musk expects to have a fully autonomous $25,000 electric vehicle on the market by 2025 -- no other automaker is anywhere close to that.

It's certainly been a winding road, but Tesla has shifted into high gear in recent years. Manufacturing efficiency has improved dramatically, due in large part to its focus on assembly line automation, the opening of the Gigafactory in Shanghai, and the expanded production capacity at its factory in Fremont, California. Collectively, those moves helped Tesla deliver an industry-leading operating margin of 6.3% in 2020.

After losing money for years, the company has also turned the corner on profitability. Tesla has now posted positive GAAP earnings for eight consecutive quarters, and other important financial metrics have been stellar over that time period.

Looking ahead, Tesla's lead in AI should be a significant advantage. The company has 3 billion miles worth of real-world driving data, far more than any of its rivals, and management recently announced that Tesla's Dojo supercomputer will be the most powerful AI training machine in the world. In my opinion, this all but guarantees that Tesla will be first to market with a self-driving car.

In turn, that will allow Tesla to launch an autonomous ridesharing service, creating an industry that will reach $1.2 trillion by 2030, according to Ark Invest. The company could also change lanes and license its full self-driving platform to other automakers, entering the high-margin software industry. And Morgan Stanley analyst Adam Jonas believes Tesla will have a flying car business by 2050, a market that he values at $9 trillion.

That last idea may be a little farfetched -- or maybe not -- but this company certainly has a flare for innovation. And despite an extremely rich valuation, I think Tesla has a bright future.