Please ensure Javascript is enabled for purposes of website accessibility
Log In Help Join The Motley Fool
Free Article Join Over 1 Million Premium Members And Get More In-Depth Stock Guidance and Research
By Bram Berkowitz – Sep 7, 2021 at 6:43AM

This fintech company operates in the subprime lending space, but appears to have a good mission, is developing innovative products, is profitable, and has a reasonable valuation.

I recently initiated a new position in the fintech company OppFi (OPFI -2.81%), a company that went public through a special purpose acquisition company (SPAC) toward the end of 2020 and began trading on its own in July. The company is attempting to revolutionize lending in the subprime credit space, which caters to riskier borrowers, typically with a FICO score below 600.

While investing in this space will undoubtedly come with risk as well as scrutiny from regulators and investors, I do like OppFi's mission and strategic plan so far, and believe the stock has huge potential. Here's why.

Shaking up the subprime space

OppFi uses artificial intelligence and automation to make small-dollar loans to individuals who normally can't get loans with a traditional bank. The company's main product, the OppLoan, is an installment loan that has an average loan amount of $1,500 over an 11-month period, and is used by borrowers to deal with situations that relate to car trouble, housing, medical bills, family, and education.

Borrowers can apply for a loan in five minutes and get a very quick decision on their application. OppFi is seeking to serve the 60 million borrowers who lack traditional access to credit. OppFi defines its customers not as low income, but as those who typically make $50,000 per year and have a bank account, but are living paycheck to paycheck.

From everything I've seen so far, OppFi is committed to providing fair services to a subset of the market that cannot get credit when they need it. On the company's second-quarter earnings call, CEO Jared Kaplan noted that about 40% of its customers have bank accounts at the three largest banks in the country, but can't get access to small-dollar loan products.

OppFi actually assesses a person's credit quality and will hand the business off to a near-prime lender if that person qualifies. However, Kaplan said that fewer than 2% of customers who come to OppFi end up qualifying.

To be clear, OppFi is charging a very high annual percentage yield (APY) on OppLoans in the range of 30% to 160%. However, in the subprime space, this is actually toward the lower end of what other subprime lenders charge. OppFi also does appear to preach transparency, as its loans do not charge late fees, overdraft fees, or prepayment penalties. The APY that borrowers see is what they get. 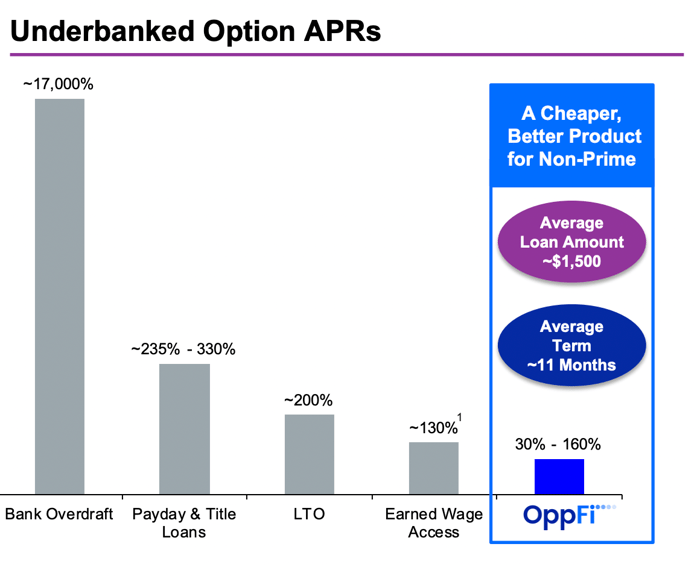 Now, I can understand that OppFi's APY is not exactly cheap, but the thing people need to understand is that small-dollar loans are hard to originate because they still carry many of the same fixed costs required to originate a normal loan. Additionally, given the nature of subprime borrowers, OppFi is still writing off 25% to 40% of its loan balances, which is obviously very high, so the company needs to price the risk appropriately.

However, there are two reasons that make me confident in OppFi's mission. First, the company buys back most of the loans its partner banks originate and holds them on its balance sheet, and assumes the risk instead of just selling all of its loans into the secondary market.

Second, OppFi has a net promoter score of 85, which is phenomenal. The net promoter score shows how likely a customer is to come back to a company for repeat business and refer a friend to the company. That 85 is higher than companies such as Starbucks, Apple, SoFi, Upstart, and nearly every other bank. OppFi's CFO Shiven Shah said customers on average take out 2.5 loans with the company. 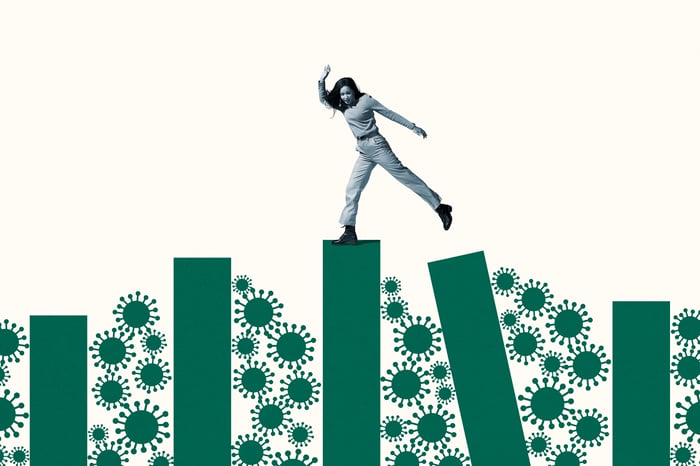 Unlike a lot of promising fintechs, OppFi is profitable and has actually been profitable since 2015. In the second quarter of this year, OppFi generated a nearly $18 million profit on adjusted revenue of more than $78 million. The company is projecting to generate between $62 million and $66 million of net income for the full year on total revenue between $350 million and $360 million. By 2023, revenue is expected to accelerate to $875 million, with net income reaching $127 million.

While there are fintechs out there with more revenue power, OppFi's profitability is strong and growing, given where the company is in its life cyle. What's even better is that OppFi does not have a crazy valuation like other popular fintechs.

As you can see, OppFi generated more revenue and had better margins in 2020 than several of its competitors, but has a total enterprise value that is just about seven times its projected 2021 earnings before interest, taxes, depreciation, and amortization (EBITDA). OppFi trades at about 12 times projected earnings this year. Even if you like OppFi's competitors better, there is a huge disparity in valuation.

Now, there is a reason for the lower valuation. While I currently do not view OppFi as a predatory lender based on the subset of the market it serves and its mission, any lender offering a high APY like this is going to get clumped into the predatory lending group by some investors, who simply will not invest for this very reason. The subprime lending category was also very problematic during the Great Recession, and aside from the pandemic, which was an unprecedented economic situation but calmed by trillions of dollars in stimulus, OppFi's AI models and credit quality have not been tested in a more traditional downturn or higher interest rate environment.

There are some very real regulatory risks as well. The Consumer Financial Protection Bureau (CFPB) formerly issued a civil investigative demand to OppFi in order to determine whether the company violated the Military Lending Act. Recently, though, OppFi disclosed that the CFPB had alerted it that it does not plan to pursue any enforcement actions.

In April, Washington, D.C.'s attorney general sued OppFi for allegedly using deceptive marketing in regards to high-cost loans with interest rates above the Washington, D.C., usury cap. The allegation is largely based on the fact that OppFi originated these loans without a license, but the company denies these allegations because its partner bank originated the loans.

And then, of course, another big threat is that lawmakers pass a 36% national interest rate cap on consumer loans, which would obviously be devastating for all subprime lenders. But Kaplan said he feels like the probability of this happening is very low considering the current makeup of Congress and the fact that such legislation could lock a lot of subprime borrowers out of access to credit.

OppFi is planning to build a strong community that captures a poorly served area of the market that it can service in multiple ways, which could increase profitability by lowering customer acquisition costs. In addition to its signature OppLoan product, OppFi is launching or gearing up to launch several exciting products.

One of these is called SalaryTap, which would allow customers to pay off their loans by setting up direct payments from their paychecks. Because this kind of loan would be considered more of a securitized product, loan amounts would start at $2,000 for 24-month terms, and come with much lower interest rates of about 30%.

OppFi is also preparing to offer other good products and services to its customers such as OppU, an educational program that reinforces good credit behavior and teaches financial literacy, and a special OppFi credit card to customers who successfully pay off their OppLoans. These cards will again go to customers who might not necessarily be able to get a normal credit card and will have spending limits of $1,500. These are just a few of the products OppFi has planned for this historically underserved market, but it also envisions many other products down the line.

While OppFi is an inherently risky business given the borrowers the company serves and the regulatory landscape, it's also a company that has been fair to its customers so far, is consistently profitable, has a very reasonable valuation, and also has strong growth prospects.

OppFi Is a Mess, but CEO Todd Schwartz Can Likely Salvage Some of the Losses

Why Shares of OppFi Are Falling Today