A major licensing deal with cancer giant Roche is pushing the biotech's shares higher this morning.

Shares of the clinical-stage biotech Adaptimmune Therapeutics (ADAP 1.98%) popped by as much as 25% in premarket trading Tuesday morning. The cancer specialist's stock is on the move this morning in response to a licensing and collaboration agreement with Roche's (RHHBY -0.15%) subsidiary Genentech.

Per the terms of the deal, Adaptimmune will receive $150 million up front to develop and subsequently commercialize so-called "off-the-shelf" (allogeneic) cell therapies targeting multiple oncology indications. The biotech might also receive another $150 million based on various developmental, regulatory, and commercial milestones over the next five years. Lastly, Adaptimmune is in line to earn tiered royalties on the net sales of any approved products stemming from the collaboration. 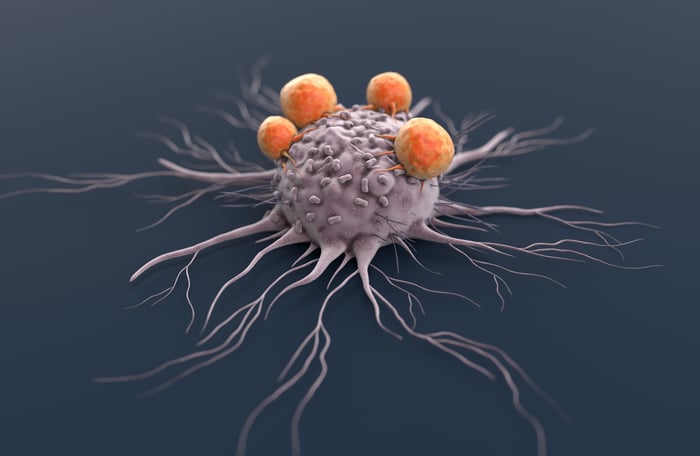 The two companies noted in this morning's press release that the total aggregate value of the deal may potentially exceed $3 billion. That's a sizable chunk of change for a biotech that had a market cap of around $600 million less than a month ago.

Perhaps most importantly, though, Roche's decision to back Adaptimmune's novel cell therapy platform is a major vote of confidence. Roche, after all, is one of the biggest players in the field of oncology.

Is Adaptimmune's stock still a buy after this early morning move? The answer is most definitely a yes. Even after this double-digit move higher, Adaptimmune's market cap is still under $1 billion. While the biotech's cell therapy platform has yet to be fully validated via a regulatory approval, Adaptimmune sports a series of high-value clinical and regulatory catalysts over the next year -- many of which could push its shares even higher in the near term. In short, there's a lot to like about this small-cap cancer stock.