Both grew their sales by more than 50% in their most recent quarters.

Two things that analysts and investors consider when a company issues an earnings report are its most recent quarterly performance and its guidance for the upcoming quarter (or the full year). Beating expectations in the most recent period can be a one-time thing and doesn't necessarily mean the business is on the right track. But when a company also raises its guidance, that's a good sign that its future is looking bright.

A couple of stocks that fall into that category are Hims & Hers Health (HIMS 3.60%) and Zoom Video Communications (ZM -4.03%). Their businesses continue to generate impressive numbers -- but are both worth buying right now? 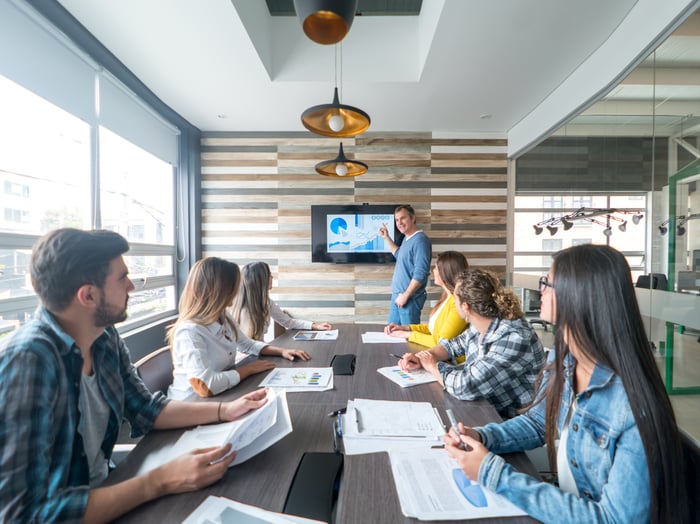 Healthcare company Hims & Hers went public through a special purpose acquisition company in January. Focused on sensitive topics including hair loss, mental health, and erectile dysfunction, the direct-to-consumer telehealth company helps connect patients to products on its website. When a prescription is necessary, customers first need to go through a consultation.

On Aug. 11, the company reported its second-quarter results; sales of $60.7 million for the period ending June 30 grew by an impressive 69% year over year. That was higher than the $56.49 million analysts were expecting. And the company's $0.05 loss per share was also $0.04 better than the average Wall Street estimate. The promising numbers led to Hims & Hers upgrading its guidance for 2021. Previously, the company was projecting revenue to be $221 million to $227 million for the full year. Now, it expects revenue to be at least $251 million and as high as $255 million.

Hims & Hers recently completed a couple of acquisitions that should lead to even more growth down the road. In July, the company completed the purchase of teledermatology company Apostrophe, which will allow Hims & Hers to expand its offerings even further. And in June, it acquired U.K.-based Honest Health, which sells hair loss and skin care products. The move also helps Hims & Hers focus on expansion in the European market and will unlock more opportunities there.

The healthcare stock is still in its early growth stages, but it is off to a great start thus far. Getting people to talk about uncomfortable topics, and selling products related to those conditions, could allow Hims & Hers to focus on a niche part of the market, one that leaves it out of direct competition with other healthcare companies. It's early on, but Hims & Hers looks like a promising growth investment and could be a solid pickup today.

Tech company Zoom also released its earnings last month. Revenue topped $1 billion for the first time and grew 54% for the period ending July 31 -- better than the $991 million analysts were expecting for the quarter. Its adjusted per-share earnings of $1.36 also easily topped Wall Street's expectations of $1.16.

Zoom is known for its videoconferencing software that has soared in popularity during the pandemic, making it easy for employees to work remotely. But there are signs things are slowing down. Although the company did bump up its projections for the year, it wasn't a significant increase; Zoom now expects just over $4 billion in revenue for 2021, up from prior estimates that went no higher than $3.99 billion. Income from operations is also expected to be at least $1.5 billion, versus the $1.425 billion to $1.44 billion range the company offered in the previous quarter.

Unfortunately, the beat and increase in guidance still weren't enough to please investors, as shares of the company fell by more than 15% on the news. One of the perils of being a stock that trades at 90 times earnings is that the bar remains incredibly high. Any sign of weakness or cracks in the armor can be enough to prompt a sell-off. And Zoom's expected revenue, of between $1.015 billion and $1.02 billion for the third quarter, is basically flat from this past period. The company's rapid growth since the start of the pandemic will undoubtedly make it difficult to impress investors in upcoming quarters, especially as employees return to the office and fewer meetings are done via video.

Down the road, there may be room for more growth opportunities for Zoom once its acquisition of cloud contact center Five9 closes -- which likely won't be until the first half of next year. In the meantime, it wouldn't be surprising for shares of this popular tech stock to continue to fall further. This stock is simply too expensive to be a good buy right now. This may be time for investors who have been holding shares of Zoom to cash out.