Please ensure Javascript is enabled for purposes of website accessibility
Log In Help Join The Motley Fool
Free Article Join Over 1 Million Premium Members And Get More In-Depth Stock Guidance and Research
By Anthony Di Pizio – Updated Sep 9, 2021 at 9:57AM

Few people are using Dogecoin as a currency, and that's concerning for hopeful investors. These two payment stocks are definitely worth considering instead.

Cryptocurrencies have been a hot topic of conversation among investors this year, with boom and bust tales so spectacular they'll be recounted for decades to come.

But as some speculative crypto tokens attempt the transition into widely adopted payment solutions, questions are mounting about just how useful they are compared to existing technologies. Dogecoin (DOGE 14.57%) is the poster token for this discussion, thanks to social media catapulting it into a $40 billion crypto success story.

For investors considering a foray into Dogecoin for its payment-processing potential, there might be more rewarding ways to go. There are two growth stocks in particular dominating the payment industry in very unique ways, and they've reached levels of consumer adoption that Dogecoin may never see.

A lack of adoption could erode Dogecoin's gains

At recent prices, Dogecoin was up around 6,100% for 2021, enough to absolutely dwarf the S&P 500's 22% return over the same period. But the question is where Dogecoin goes from here, as investors who purchased tokens since the spring have watched the price fall, not rise. 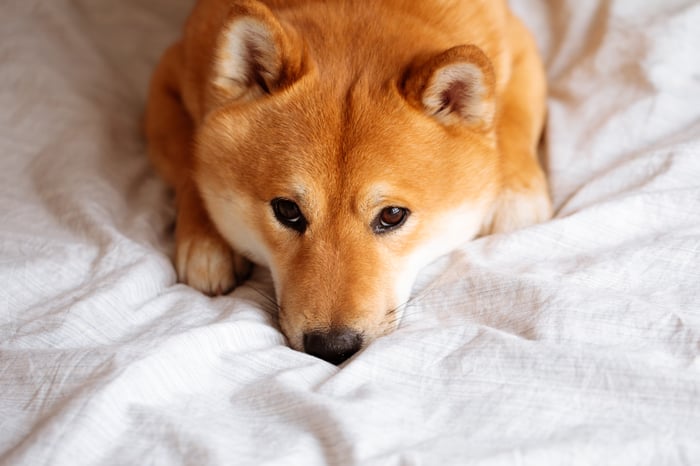 Some investors think Dogecoin could rise in price to match Bitcoin, but unfortunately the math doesn't quite add up. If Dogecoin rose to $50,000 per token, it would have a market capitalization of $6.6 quadrillion, or about 15 times all the recorded wealth in the entire world. That's because there are far more Dogecoin tokens in circulation than Bitcoin.

Other investors think Dogecoin will evolve into a widely used payment system, but that's not really happening, either.

According to the most recent data, only 1,600 businesses accept Dogecoin as a form of payment. But it's the rate of adoption that's more concerning, with just 400 of those merchants signing on this year. That's only 50 per month, and likely not enough to move the needle on broad consumer adoption, since they're mostly small businesses.

In fact, Dogecoin logged just 22,900 transactions on Sept. 3, or about 91% fewer than Bitcoin. For all of Dogecoin's popularity, it seems to be failing at becoming a widely used payment solution.

So for investors thinking about buying Dogecoin for its utility, it might be worth considering high-growth stocks with proven staying power instead. Here are two technology-driven payment companies that can show Dogecoin how it's supposed to be done. If innovation and excitement are part of the investment criteria, then Paysafe (PSFE 5.15%) is a growth stock to consider. It's a payments company with one very specific focus right now: online gambling.

It's riding the coattails of some of the world's largest bookmakers and online casinos as they blaze a trail through American states that have legalized online gambling. Paysafe has a long-standing partnership with European giant Flutter Entertainment, which owns popular brands like PokerStars and Betfair. Its new U.S. subsidiary Fox Bet is expanding into states that allow online sports betting, and Paysafe is powering its transactions.

Paysafe owns Skrill, a digital wallet, and Neteller, a solution that facilitates payments between consumers and merchants. It's using these brands to securely process transactions for online gambling companies and their customers.

In the second quarter of 2021, Paysafe processed over $32 billion worth of transactions globally. It was a 41% increase over the same quarter last year, and it's almost as much as the entire value of all the Dogecoin currently in existence.

The company reports over 12.1 million customers under its eCash segment, which is responsible for iGaming (online gambling). It's the fastest-growing area of the company, driven by the American gambling expansion, which saw 48% growth in revenue alone in the second quarter.

At recent prices, investors can buy the stock for a roughly 50% discount to its all-time highs, since there have been some concerns about the company's overall growth trajectory. But these worries should be alleviated as the faster-growing eCash segment becomes a larger portion of Paysafe's total revenue.

With tens of millions of customers and increasing payment volumes, Paysafe looks like a great investment alternative to Dogecoin. 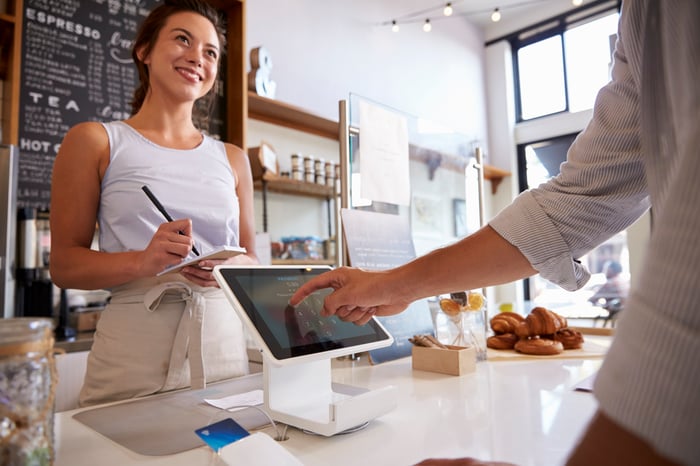 Fiserv (FISV 0.40%) is a quintessential payments powerhouse. It has over 1.4 billion accounts on file and touches almost 100% of American households. But still, it isn't well known because it doesn't deal with consumers directly; it instead serves financial institutions and merchants.

Fiserv processes 24,000 transactions every two seconds, which is more than Dogecoin does in an entire day.

The company operates in three key segments. Its merchant acceptance segment issues point-of-sale hardware devices to businesses, allowing them to accept payments from customers. It also serves financial institutions through its payments and network business, where it offers fraud protection and digital payment processing. And it operates a fintech business that provides software to banks, including customer portal solutions for online banking.

The merchant acceptance segment grew revenue by 36% in the second quarter, the fastest among all of Fiserv's businesses. It was driven by the company's cloud-based Clover point-of-sale technology, which allows merchants to process transactions in-store.

Fiserv has grown its total revenue at a compound annual rate of 41% since 2018, inclusive of its $16.4 billion in 2021 estimated revenue, and analysts expect the company to generate $5.58 in earnings per share this year. That places the stock at a multiple of 20 times, which may look cheap for long-term investors given the company's growth rate.

But most important, it operates a payments business that Dogecoin can only dream of.