All three of these companies can be a permanent part of an investor's portfolio.

With broad market valuations at or near all-time highs, it can be a challenge to find bargain stocks to buy right now. Luckily, if you are an individual investor with a multiyear time horizon, there are still plenty of smart places you can park your hard-earned dollars.

Sprouts Farmers Market is a health-focused grocery chain based in Arizona with a presence in many states across the U.S. Unlike a traditional supermarket, Sprouts has an open layout with bulk, produce, and specialty items featured at the center of the store. The stores focus on catering to people who follow dietary restrictions (keto, paleo, vegan, etc.) and it offers these goods at a reasonable price.

Over the last 12 months, Sprouts has generated $6.3 billion in revenue and $2.30 in earnings per share. Management is guiding for revenue to be down in 2021 compared to 2020 because of the artificial bump in sales the business had at the start of the pandemic. However, when looking back to 2019 or even earlier, investors can see that Sprouts has consistently grown its revenue base as it has expanded across the nation.

With only around 360 stores, Sprouts has plenty of room to grow its store count. It plans to open 13 to 20 stores this year, and then grow its store count by 10% a year from 2022 onward. Right now, the stock has a market cap of $2.65 billion. Based on its trailing-12-month income of $273 million, Sprouts has a price-to-earnings ratio of 10.1, which is much cheaper than the market average of 35.3. Combine this cheap price with the durability of grocery stores and Sprout's ability to grow store count across the country, and this stock looks like a great long-term hold at these prices. 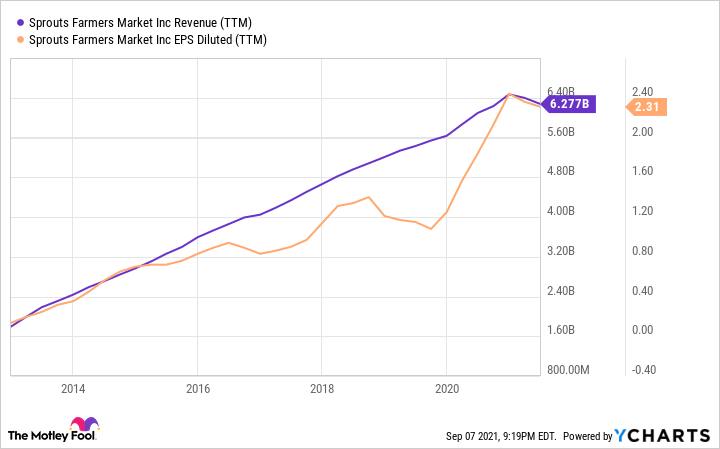 Activision Blizzard used to be a high-flying growth stock, but in recent years its financials have grown a lot faster than its share price (and therefore brought its earnings multiple down). The company is a video game publisher known for the game franchise Call of Duty, which brings in the majority of its earnings. It also owns popular franchises like World of Warcraft, Diablo, and the mobile hit Candy Crush.

In recent years, the company has expanded the Call of Duty franchise, releasing a mobile game and free-to-play battle royale game called Call of Duty: Warzone. That has driven in-game net bookings (the video game equivalent of revenue) on consoles/PCs to four times the levels of 2019, and Call of Duty: Mobile is on pace to generate $1 billion in net bookings this year. Among the company's other games, Overwatch 2 is set to launch soon, and the Diablo series is preparing to debut multiple games over the next few years, including an expansion into a mobile title. King, the studio that makes Candy Crush, saw advertising revenue double year over year in the latest quarter.

Nelnet is a little-known conglomerate based in Lincoln, Nebraska. Its primary business comes from the $20 billion student loan portfolio it manages, which is estimated to generate $1.39 billion in cash through 2025 and an additional $830 million thereafter. The problem is, Nelnet is unable to originate new student loans since the federal government moved that function in-house in 2010. But it has reinvested its existing loan book into new business lines and investments. So far, it has done so quite successfully.

Its loan servicing segment had $15 million in operating income last quarter, and it owns a large stake in Hudl, a software company providing tools for coaches and athletes to review game footage and improve team play. The most important subsidiary is Nelnet's payments/software business for private K-12 schools and colleges, which did $48 million in operating income through the first half of the year. Right now, Nelnet's market cap of $3.1 billion and its trailing P/E ratio is a bargain at 6.1. Considering management's track record of growth, the slowly melting loan book that spits out consistent cash flow each year, and the fast-growing software/payments division, Nelnet stock looks like something you can buy and hold forever.

3 Value Stocks That Are Screaming Buys in October