Shares of the biotech blueblood Biogen (NASDAQ:BIIB) are down by a hefty 7.42% as of 11:55 a.m. EDT on Thursday. That equates to about a $3.6 billion drop in the company's market cap since the opening bell this morning.

Biogen's shares are retreating in response to a commercial update provided by CEO Michel Vounatsos at an investor conference held by the investment bank Morgan Stanley Thursday morning. Specifically, Vounatsos revealed that the company's newly approved Alzheimer's disease drug Aduhelm is off to a slower-than-expected start since its commercial launch roughly three months ago. According to a report by the health news site STAT, he pinned the blame for the drug's tepid launch on "confusion, misinformation, and controversy" over the drug's efficacy and approval process. 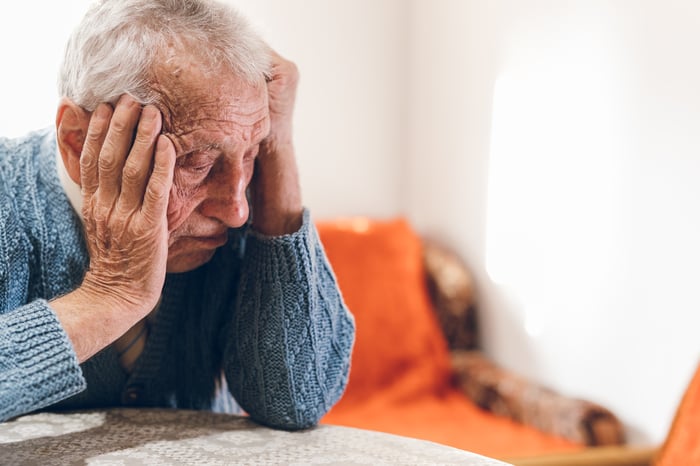 Biogen's decision to forgo any major business development activities over the past few years puts the onus squarely on Aduhelm to drive the company's growth in the near term. Underscoring this point, the biotech's spinal muscular atrophy medication Spinraza, along with its core multiple sclerosis franchise, are both experiencing declining sales at the moment.

Keeping with this theme, Aduhelm was originally expected to be a turning point in the company's recent history due to the enormous need for a drug for Alzheimer's disease, coupled with the drug's stately annual price tag of $56,000. But so far, the drug is stumbling out of the gate for a variety of reasons.

Biogen's brain trust appears to be confident that these early sales figures will improve, perhaps drastically so, over time. And the biotech's brass might have a point.

Aduhelm's commercial launch is currently being slowed down by a whole host of issues, including (but not limited to) the question of reimbursement from all-important payers such as Medicare, as well as a decision by a handful of large health systems like the Cleveland Clinic not to include the drug on their formulary for the time being.

Until these issues are resolved, however, Aduhelm's sales are likely to continue to underwhelm. As such, it might be prudent to stick to the sidelines with this large-cap biotech during this turbulent time.