Please ensure Javascript is enabled for purposes of website accessibility
Log In Help Join The Motley Fool
Free Article Join Over 1 Million Premium Members And Get More In-Depth Stock Guidance and Research
By Kody Kester – Sep 10, 2021 at 7:11AM

Pfizer isn't resting on the laurels of its COVID vaccine success.

Pfizer (PFE 0.74%) was arguably a prolific vaccine maker before last month, when the U.S. Food and Drug Administration gave full approval for those 16 and older to its COVID-19 vaccine, Comirnaty, which it co-developed with BioNTech (BNTX -0.88%).

After all, Pfizer owns the Prevnar pneumococcal vaccine franchise, which brought in $2.52 billion in revenue during the first half of this year. Pfizer's tick-borne encephalitis vaccine, known as TicoVac, also secured FDA approval in the U.S. last month, which could multiply its revenue several times over to about $1 billion annually.

But despite its prominence in the space already, Pfizer is shooting for its next blockbuster vaccine. The company is seeking to expand its reach into the respiratory syncytial virus (RSV) vaccine market. Pfizer took a step in the right direction to achieve this goal by announcing that it was starting phase 3 clinical trials for its RSV vaccine candidate, known as RSVpreF, following promising phase 2 results.

Let's take a look at RSV, Pfizer's phase 2 clinical results for RSVpreF, and what all this could mean for Pfizer. 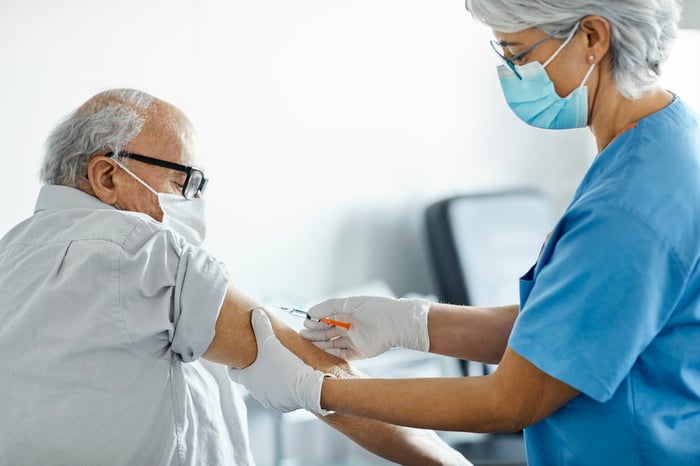 It's still early, but the results have been encouraging

RSV is a common cause of acute respiratory illness, which is particularly dangerous and life-threatening for infants, the immunocompromised, and older adults, according to Pfizer. Like other respiratory illnesses, RSV often starts in the fall and peaks in the winter.

In spite of the tremendous burden that RSV imposes on the U.S. healthcare system, there are no FDA-approved vaccines for RSV to this point. However, Pfizer's phase 2 clinical trial results for RSVpreF give reason to believe that this could change very soon.

In a 62-patient phase 2 clinical trial that studied the efficacy of Pfizer's RSVpreF among patients aged 18 to 50, RSVpreF was found to be 100% effective against mild to moderate RSV illness in adults, and no serious adverse events were reported.

This efficacy and safety profile in younger adults is what led Pfizer to believe that RSVpreF also will be effective in preventing severe lower respiratory tract illness in older adults. This is why Pfizer just began enrolling approximately 30,000 participants at least 60 years old for its phase 3 clinical trial, which could conclude as soon as the first quarter of next year.

A large and unaddressed market

If the clinical results observed in the phase 2 trial of RSVpreF can come even close to being reproduced in the ongoing phase 3 clinical trial, Pfizer could have yet another blockbuster vaccine in its portfolio.

That's because an investment bank specializing in healthcare, SVB Leerink, estimates that the RSV vaccine market will grow to around $10 billion by 2030. Of that, 72% will come from the non-pregnant adult segment of the population, which Pfizer is targeting with RSVpreF, the remainder coming from infants (18%) and pregnant people (10%).

With a crowded field looking to fill this urgent and unmet medical need, including the likes of GlaxoSmithKline (GSK 0.89%), Johnson & Johnson (JNJ 0.13%), and Sanofi (SNY 0.78%), I agree with SVB Leerink's estimate that RSVpreF will be able to seize 20% market share, or about $2.1 billion in annual revenue, by 2030 if the drug is approved by regulators around the world.

A well-versed and fairly valued business

A vaccine with $2 billion in annual sales potential is nothing to sneeze at, even for a large-cap pharma stock like Pfizer, which expects to generate $78 billion to $80 billion in revenue this year.

But even in the unlikely event that RSVpreF yields unimpressive results in its phase 3 clinical trial and isn't approved for use, there are plenty of products in the pipeline that are already approved to drive growth for Pfizer in the years ahead.

While Comirnaty sales have nowhere to go but down from the $33.5 billion that Pfizer expects for this year, one product that could partially offset this COVID-related revenue decline is the company's antiviral oral protease inhibitor, known as PF-07321332. The product aims to treat COVID by preventing the virus from replicating. Fool Keith Speights believes that the COVID therapy is capable of emerging as a blockbuster next year, which would be a nice boost to sales.

The anticoagulant drug used to treat and prevent blood clots known as Eliquis, which Pfizer jointly developed with Bristol Myers Squibb (BMY 0.13%), is yet another solid growth catalyst for the business. Pfizer's share of Eliquis's first-half revenue surged by 21.5% year over year, from $2.57 billion last year to $3.12 billion this year. This strong sales growth suggests that the momentum won't slow down any time soon, especially with two of Eliquis' three patents not set to expire until 2026 and 2031, respectively.

And regardless of the 27% rally in Pfizer's stock price year to date, it appears as though the stock is still trading at a reasonable valuation given its steady fundamentals.

Pfizer's price-to-free-cash-flow ratio of 12.9 is lower than its 13-year median of 14, which means that investors can purchase a well-covered 3.3% yield at a slight discount.