The acquisition of Nimbella will bring an even simpler way to create a cloud application to DigitalOcean's platform.

Other developers want to focus on the product, leaving the nitty-gritty infrastructure management to someone else. DigitalOcean (DOCN -6.06%) offers both options. The tech company's Droplets are full-blown virtual servers, while its App Platform allows developers to upload application code and scale resources quickly and easily without needing to touch the underlying infrastructure.

The App Platform is convenient, but it still requires developers to write full backend server applications, the same applications that would otherwise be running on a Droplet. What DigitalOcean lacks is a serverless computing product. With serverless computing, developers can write individual chunks of code that perform specific actions, and each piece of code can scale independently. There's no server application, just a collection of cloud functions. 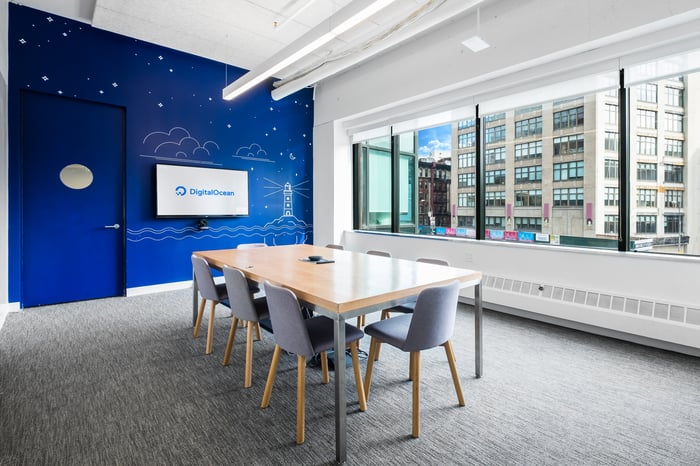 DigitalOcean is aiming to fill this serverless gap in its product catalog with the acquisition of Nimbella. The company announced on Tuesday that it would be buying the serverless computing platform. Terms weren't disclosed, and DigitalOcean doesn't expect the deal to change its financial outlook for the year. By the first half of 2022, DigitalOcean expects to launch a serverless product under its own brand after integrating the Nimbella platform.

One thing that makes DigitalOcean stand out from larger cloud providers is simplicity. DigitalOcean has a small selection of core cloud services, and each comes with simple and transparent pricing. Even as DigitalOcean has expanded its product catalog, adding the App Platform and managed databases, the company hasn't strayed from its core mission to simplify cloud computing.

The Nimbella acquisition makes a lot of sense in this context. An application on Nimbella's platform has two parts: The static files that run in a user's web browser, and a set of cloud functions. That's it. It's a lot like how popular development platforms like Netlify work. Developers create their websites using whatever tools or frameworks they want, and they create their backend by writing simple cloud functions.

One inherent downside with serverless computing is a lack of statefullness. While a server application is always running, capable of keeping track of users' sessions using built-in storage, cloud functions are only created when they're needed. For an application using cloud functions as its backend, a database or some other separate service would be needed to keep track of any state. Of course, that complicates things.

Nimbella's platform solves this problem with built-in storage that cloud functions can access. Functionally, it's no different than using a separate database to keep track of data. But by building this right into the platform, Nimbella users don't need to worry about managing a separate service.

Once DigitalOcean launches its Nimbella-based serverless product next year, the platform will appeal to a broader set of developers. DigitalOcean has always been capable of competing with the big cloud platforms for users willing to manage their own cloud infrastructure. With serverless, DigitalOcean will be a viable alternative to serverless-focused platforms like Netlify, Vercel, and Google's Firebase.

It was inevitable that DigitalOcean would eventually offer a serverless computing product, given the company's focus on simplicity and convenience. The acquisition of Nimbella won't boost DigitalOcean's results in the near term, but in the long run it will make the platform far more appealing to developers looking for the simplest way to launch a cloud-based product.