The company announced a deeper expansion into branded apparel.

Shares of Peloton Interactive (PTON -2.93%) were up 5.9% as of 10:37 a.m. EDT on Friday after the company introduced its new branded apparel line on its website.

Decelerating growth, the recall of its treadmills earlier this year, and the decision to lower prices on its connected-fitness products and raise marketing spending has given investors pause in recent months. But with Peloton's shares down about 25% year to date, bargain hunters are naturally going to pounce on any piece of good news that could turn into a growth catalyst.

Here's what to know about Peloton's apparel strategy. 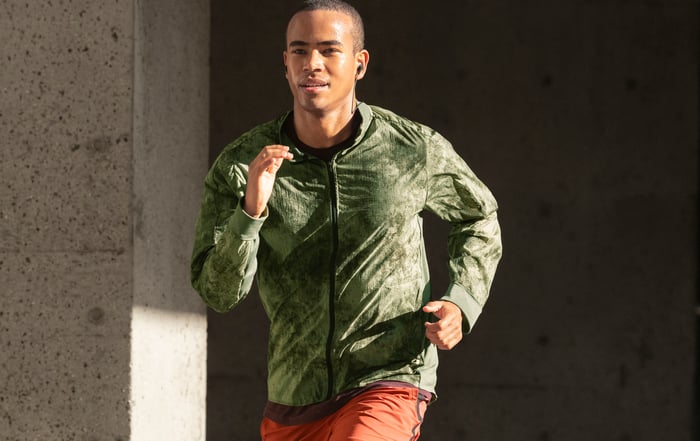 Peloton has been offering branded apparel for a while, but this announcement appears to be the first real effort to raise the bar. Peloton previously reported apparel sales in the "other" revenue category, which grew from $2.6 million in fiscal 2017 to $14.7 million in fiscal 2019. It was a tiny piece of Peloton's business, but it was growing right along sales of its popular exercise bikes.

Peloton is still primarily focused on selling more Bikes and Treads to increase the number of subscribers to online fitness classes, where the company generates its highest profit margin. But in the long run, management is interested in expanding into new product categories to further monetize its subscriber base.

Peloton has historically used the gross profit from selling exercise equipment to offset marketing costs, so it's easy to see what management is trying to do here. Selling athletic apparel is complementary to the company's core business and adds another profitable revenue stream that can improve its profitability.

However, Peloton now lumps apparel sales with sales of connected-fitness products, so it's unclear what percentage of its business comes from apparel. For that reason, investors shouldn't run out and buy the stock just on this announcement. But this move helps put into context why management has been willing to cut prices on its hardware. The long-term goal is to basically maximize the lifetime value of each customer, and offering branded apparel is one way to do that.