This little-known provider of water management solutions has a long runway for growth in this era of more frequent and severe flooding in certain areas and water scarcity in others.

On Aug. 26, Hurricane Ida slammed into Louisiana as a category 4 hurricane, destroying countless structures, killing more than a dozen people, and leaving more than 1 million homes and businesses without power in the Pelican State.

While this is a tragedy, a hurricane making landfall on the U.S. Gulf Coast isn't surprising. What is shocking is the unprecedented flooding Ida's remnants caused in the heavily populated Northeast. Floodwaters shut down key transportation infrastructure in New York City, Philadelphia, and several other large cities, and killed at least 45 people in New York State and neighboring New Jersey. That's about half of the 89 U.S. deaths being attributed to Ida, as of Sept. 7.

Scientists largely predict that climate change will continue to drive an increase in the frequency and severity of a wide range of weather events, including torrential rains and resultant flash flooding in certain areas. 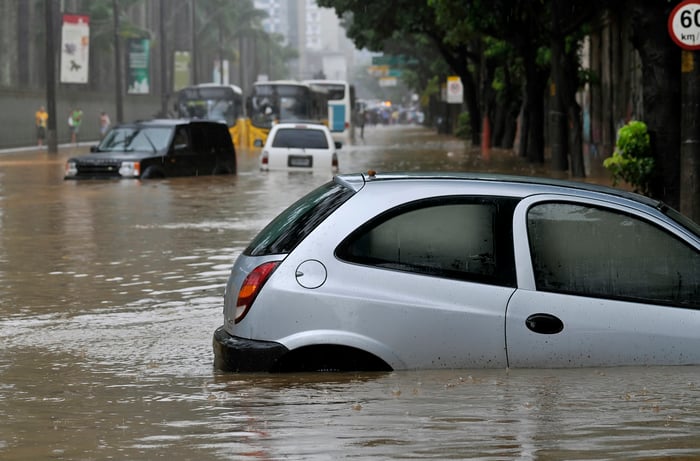 Prepare your portfolio for climate change

One way to prepare your portfolio for climate change is to invest in companies that should experience an increase in demand for their products and services stemming from our changing climate. I've already written about backup-power specialist Generac Holdings, whose stock has increased by nearly fivefold since I first wrote about it in late 2019, beating the S&P 500's return by more than seven times.

In this article, I'm taking an even bigger cue from a line in extraordinary singer-songwriter Mary Chapin Carpenter's "The Hard Way": "And tell me something I don't know..."

Giving that a shot, I'm guessing Advanced Drainage Systems (WMS -1.22%) might be a new name to many of you. Even if you do know the company, you should find some information here that's new to you. ADS should benefit from the Ida-made-obvious need for much better water drainage systems in many areas of the country. Importantly, the company doesn't need for things to get worse on the climate change front to continue to do well, in my opinion. 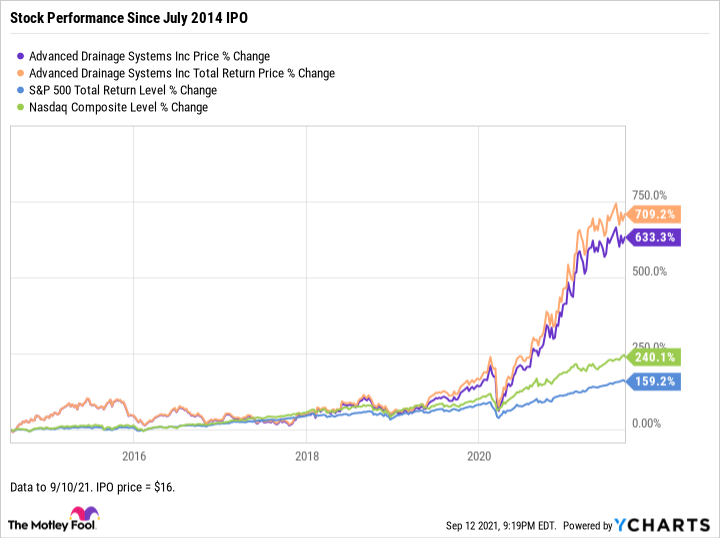 Advanced Drainage Systems, now headquartered in Ohio, was founded in Delaware in 1966 and held its initial public offering in July 2014. Its WMS ticker symbol is easier to remember if you know what it stands for: water management systems.

The company describes itself as a "leading manufacturer of high-performance thermoplastic corrugated pipe and ancillary products, providing a comprehensive suite of water management products and superior drainage solutions." Its products are used in commercial, residential, infrastructure, and agricultural applications.

One big thing to like about ADS is its history of innovation. It was founded by two engineers who were raised on farms. They reportedly were early to recognize that corrugated high-density polyethylene (HDPE), invented in the 1950s, would have some key advantages over traditional materials that were then widely used in agricultural drainage systems, such as concrete and clay. These advantages include lighter weight and ease of handling.

From its U.S. agricultural roots (pardon the pun), the company expanded its corrugated thermoplastic piping into other end markets and geographic markets, and introduced new products in the water management realm.

Growth has been organic and by acquisition

I like how ADS' business has grown: largely organically for many years, with several key synergistic acquisitions, mostly in recent years.

In 2005, the company acquired Hancor, which was also based in Ohio, for an undisclosed amount. This move eliminated its toughest competition in the HDPE pipe manufacturing business, since ADS and Hancor were the largest and second-largest players, respectively, in this industry at the time. This enabled the company to concentrate its efforts on taking market share from manufacturers of water management piping and related products made from other materials.

In 2019, the company made another big acquisition with its approximately $1.1 billion cash deal to buy its longtime partner, Connecticut-based Infiltrator Water Technologies, a leader in on-site septic wastewater treatment systems in the U.S. and Canada. "The on-site septic business shares similar conversion dynamics to ADS' core stormwater business, with plastic septic chambers and tanks gaining share faster than traditional products," according to the press release. 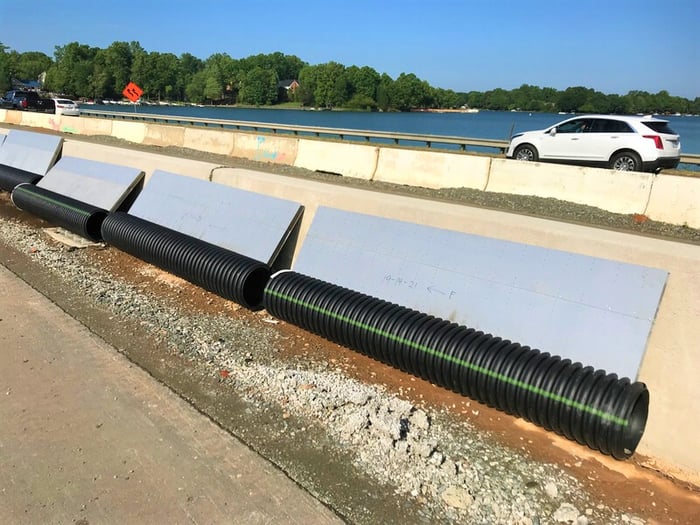 Advanced Drainage touts that it's the second-largest plastic recycler in North America, and over half of the plastic it purchases is recycled. Recycling isn't just the responsible thing to do, it's also smart business as the company is using its large-scale recycling capabilities to help drive down its raw material costs.

There is no type of plastic that's completely innocuous relative to its impacts on both the environment and human health, in my view. But ADS isn't involved in the type of plastics that are of higher concern, such as polyvinyl chloride (PVC) and plastics with the additive bisphenol A (BPA).

Advanced Drainage performed very well in fiscal 2021 (which ended March 31), despite the challenges caused by the pandemic. Revenue jumped 19% year over year to $1.98 billion. Growth was driven by strong demand in the U.S. residential and agriculture end markets.

ADS' stock is reasonably priced when measured by the commonly used P/E ratio as a valuation metric. The P/E ratio of 44.3 is somewhat less than the company's projected average annual earnings growth rate over the next five years (49.5%).

Moreover, the stock is a downright bargain when using that 25.8 ratio of price to free cash flow, which is arguably a better ratio at least over the long term. Earnings can be legally manipulated, since they are simply an accounting metric; cash flows cannot be.

Of course, it's likely that Wall Street's earnings projection will turn out to be inaccurate. Your take might be different, but my sense is that analysts are generally not taking climate change into account enough when developing their revenue and earnings estimates for certain companies, including ADS. 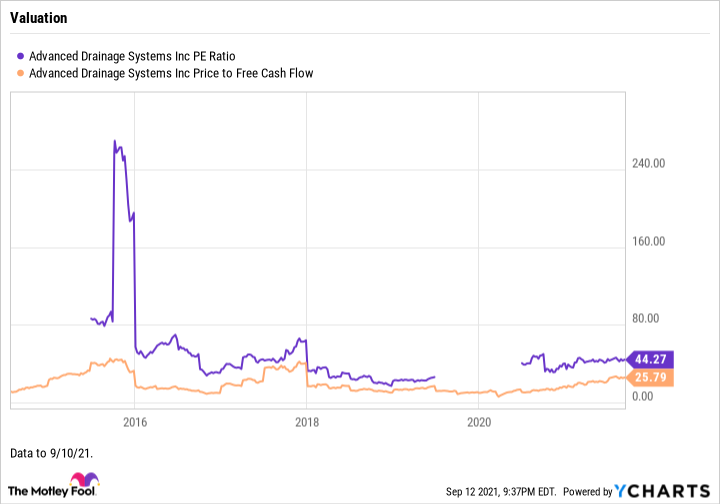 The chart below shows that margins from both an accounting basis (operating margin and profit margin) and cash basis (metrics two and four, in orange and green) have generally been moving upward since the company went public. (The drop in 2020 in the accounting-based metrics is related to the company's employee stock ownership plan, and didn't affect its cash generation.) 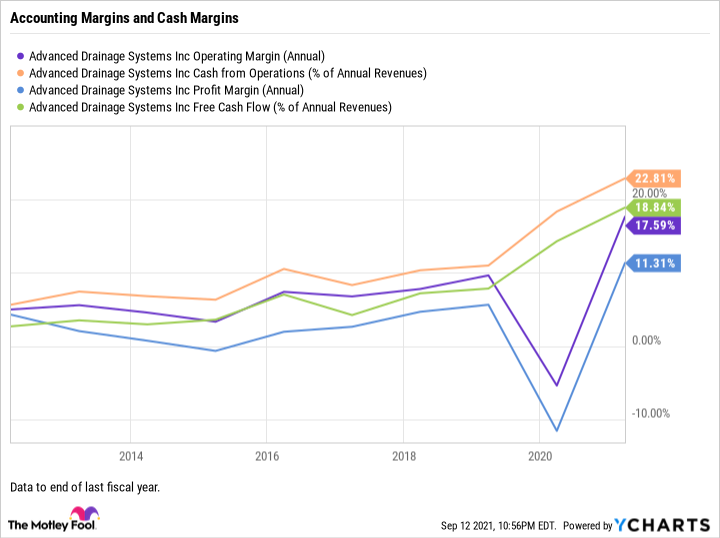 The next chart shows a few other metrics that are helpful to check. 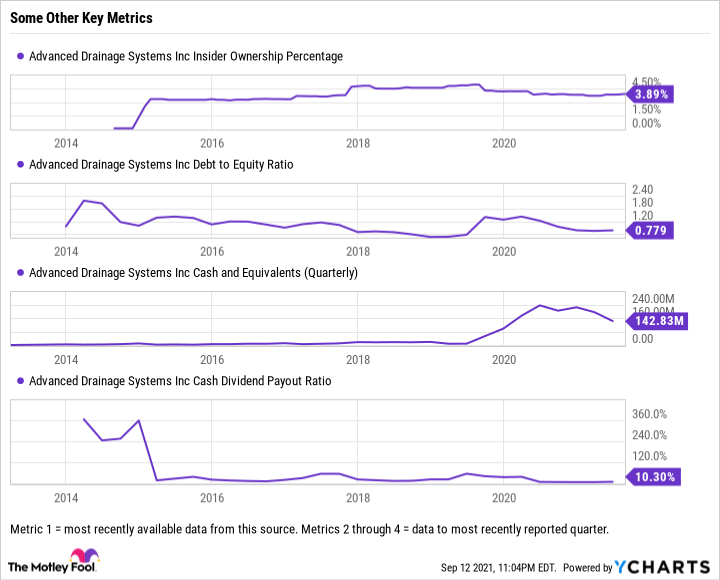 First off is insider ownership -- and ADS looks OK here at initial glance. There doesn't seem to be "unusual" selling (a judgment call) by insiders beyond the usual profit-taking. It can be helpful to check to see how much stock the top C-level execs beyond the CEO own. If a couple of them don't hold any shares or relatively few, that's at least an orange flag to me. The "Hard Way" lyric that fits here: "actions speak louder [than rah-rah words on earnings calls]."

Next up is debt-to-equity ratio. ADS has done a good job bringing its relative debt load down since its early years as a publicly traded company. It has also increased its cash position (the third metric above), thanks largely to its operation generating robust amounts of cash.

The last metric is the cash dividend payout ratio, which is the percentage of a company's free cash flow (after preferred dividends) that it paid as dividends to common shareholders. Since the year after the company's IPO, this metric has ranged from about 10% to the mid-50 percentages. This range suggests the company has been comfortably able to afford paying its dividends. As a rough rule of thumb, this metric should be lower than about 50% to 60%, though what's acceptable varies by industry.

As to the dividend, the stock was yielding 0.38% as of the market close on Sept. 10. A main reason the yield is quite small is that the stock has performed so well over the last few years. Since going public, ADS has increased its regular quarterly dividend each year except 2020, a year in which many companies held steady (or even decreased or eliminated) their dividend due to the pandemic. Moreover, in 2019, ADS paid a special dividend in addition to its regular dividend, which demonstrates a better-than-average commitment to returning value to shareholders.

A stock to consider buying

Advanced Drainage Systems stock is worth considering buying. The company and the stock have been performing very well in recent years, and it seems quite likely the increasing effects of climate change will provide a long-term tailwind.