However, investors might be reluctant to buy ASML after it rallied more than 140% over the past 12 months. Is it too late to buy ASML at these levels, or does this hot chip stock still have room to run?

What does ASML do? 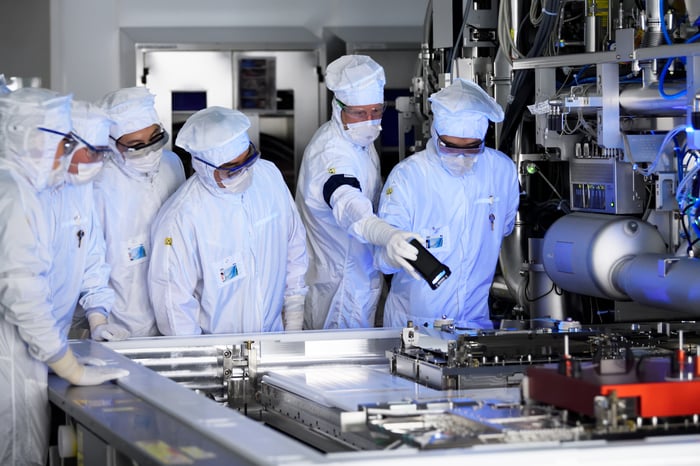 TSMC (NYSE:TSM), the world's most advanced contract chipmaker, started using ASML's EUV machines before its rival foundries. That early adoption enabled TSMC to pull ahead of Samsung and Intel (NASDAQ:INTC) in the "process race" to manufacture smaller and denser chips.

TSMC is ASML's largest customer today, but Samsung and Intel are now scrambling to upgrade their plants, which involves securing more EUV systems from ASML. The company's next generation of high-NA EUV machines (where NA refers to the breaking index of the machine, a technical measure of how detailed the lithography images can be) will also enable those top foundries to manufacture even smaller chips.

In other words, the world's leading foundries are buying ASML's EUV machines as quickly as it can produce them, and ASML's monopoly gives it plenty of pricing power. Therefore, ASML will continue to profit from the rising capital expense budgets at TSMC, Samsung, and Intel as the process race heats up again.

How fast is ASML growing?

ASML's gross margins have consistently expanded over the years. Its revenue and earnings growth has also accelerated significantly since 2019, when a glut of memory chips temporarily throttled its growth.

That growth will be driven by three main tailwinds: the ongoing chip shortage, which many analysts believe will last through2023; surging capital expenses at TSMC and Intel, and the increasing mix of higher-margin EUV machines (59% of its net bookings last quarter) on ASML's top and bottom lines.

ASML's business is firing on all cylinders, but its stock isn't cheap at 46 times next year's earnings and 14 times next year's sales. The bulls will claim its strengths justify those higher valuations, but they won't provide the stock with much downside support if the market crashes.

The semiconductor market is also cyclical, and chip shortages frequently lead to chip surpluses. TSMC, Intel, and Samsung will likely resolve the current chip shortage by significantly boosting their capacity, but they could end up manufacturing too many chips as the market's demand cools off again.

The bulls will claim the current chip shortage is fueled by a "supercycle" of growth in the semiconductor market, which could last much longer than previous cycles due to the secular expansion of newer technologies like 5G networks, data centers, connected cars, and Internet of Things devices.

However, there's no way to tell how long this cycle will actually last until the chip shortage is resolved. If a chip surplus occurs, ASML's growth could decelerate and its stock could tumble.

Is it too late to buy ASML's stock?

I believe ASML's stock will continue rising because it's a linchpin of the semiconductor market and the chip shortage is far from over. However, I don't think it will double or triple again in the near future since its valuations are getting stretched. Simply put, it's not too late to buy ASML stock -- but investors should have realistic expectations and recognize the threat of a potential semiconductor oversupply in the near future.