Could it one day eclipse Bitcoin?

For years, investment pundits have been hyping Bitcoin as the gold of the cryptocurrency realm and Litecoin (LTC 2.39%) as the silver. The analogy seems apt: Just as gold has outperformed silver in the past few years, Bitcoin's returns have trounced those of Litecoin. A $10,000 investment in Bitcoin in 2013 would have grown to $886,000 today, compared with just $232,000 for Litecoin.

This underperformance comes even amid Litecoin's popularity as a medium of exchange for funds and transfers. So can you count on the 15th largest cryptocurrency in the world to help your investment portfolio grow? 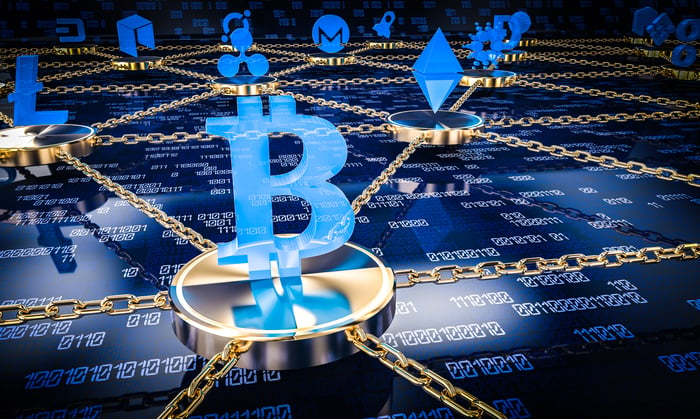 Litecoin is known for its lightning-fast transaction times. The network can process as many as 56 transactions per second, compared with just seven for Bitcoin. In addition, transaction fees are usually a few pennies, versus the latter's few dollars (which can skyrocket during peak network demand amid bouts of speculation). Block times -- the time it takes to validate the existence of a new batch of tokens -- are also faster, taking 2 1/2 minutes for Litecoin and 10 minutes for Bitcoin. Lastly, each Litecoin transaction consumes just 3% of the energy it takes to process one Bitcoin transaction.

As of this writing, more than 3,000 businesses and stores worldwide accept Litecoin; there are 7,300 that accept Bitcoin. What's more, Litecoin is listed on nearly every cryptocurrency exchange, so users can seamlessly transfer Litecoin from one exchange to another. They also can use it as an entry point to purchase other altcoins, or cryptocurrencies aside from Bitcoin.

For some time, Litecoin lagged behind developments in the rest of the blockchain industry because its only functionality involved that of making uni-dimensional peer-to-peer electronic payments. But it is catching up after others jumped ahead.

Earlier this year, miners around the world finally agreed to overhaul Bitcoin's outdated protocol and introduce smart-contract functionality to the network via its Taproot update, scheduled for introduction in November. Once Taproot goes live, users would be able to take out asset loans using Bitcoin, buy and sell nonfungible tokens, interact with decentralized applications (dapps), swap for altcoins on decentralized exchanges, and more.

In recent years, the current "reserve currency" for such types of transactions has been Ethereum (ETH 0.39%). For example, Ethereum now handles $294.8 million worth of smart contracts, or self-executing agreements, each day across 2,841 dapps. So there's definitely a lot of potential for the Bitcoin to disrupt the market.

But there's the potential for Litecoin to match Bitcoin, because its developers have finally decided to improve the currency. On Sept. 7, the Litecoin Foundation introduced OmniLite, a protocol built on top of Litecoin's blockchain. OmniLite will enable the deployment of smart contracts, nonfungible tokens, and decentralized tokens with transactions notarized on Litecoin's ledger. What's more, third-party providers, such as Wanchain, have made Litecoin smart contracts compatible with the Ethereum Virtual Machine, although for now their adoption rate remains low.

There is yet another exciting feature that developers are implementing. Last year, Litecoin founder Charlie Lee said in an interview that he is looking to add privacy-enhanced features for the network, such as obfuscating transactions on its ledger. The move would enable Litecoin the ability to solve the problem confronted by Bitcoin—every transaction has less privacy that using cash. Privacy coins such as Monero and Pirate Chain have surged in popularity in recent years among users who wish to conduct transactions without the fear of being tracked by crypto analytics firms.

Overall, Litecoin is beginning to gain footing in a hypercompetitive cryptocurrency ecosystem and is transforming itself into something more useful. That makes it a worthwhile holding for investors seeking to put their money into altcoins.

Litecoin Gets a Second Wind Heading Into 2023

3 Under-the-Radar Cryptocurrencies That Could Pop in Early 2023