What are the key attributes to look for when seeking out stocks that have great potential for impressive long-term returns? First, start with market leaders within their respective industries or regions. Such dominance is likely to go unchallenged, and the incumbent can then go on to grow faster than the rest of the pack.

Second, look for businesses latching on to long-term trends or that have catalysts that can propel their revenue and net income higher over time. With such trends acting as a tailwind, the company can quickly reach greater heights. The beauty of owning such stocks is that your wealth will also multiply over the years due to a steadily rising share price.

Here are two stocks that possess both attributes -- they are leaders in their field and also have plenty of runway for further growth. 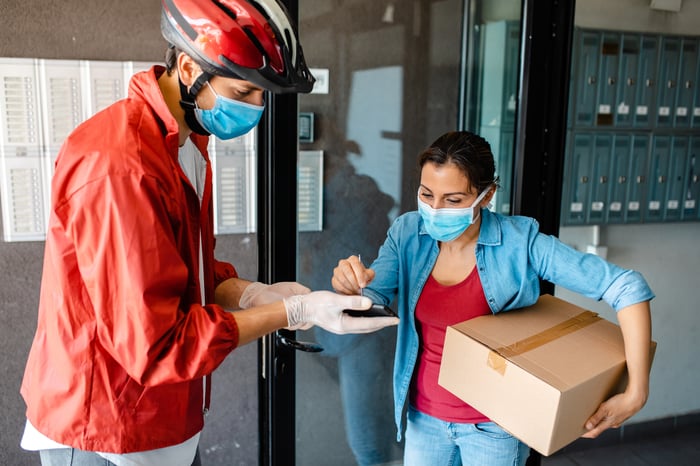 Netflix (NASDAQ:NFLX) is without a doubt an early pioneer and market leader in the streaming television industry. The business started in 1997 as a mail-order DVD rental service but has now grown into a streaming behemoth with over 200 million paid members. In the last five years, from 2016 to 2020, Netflix grew its revenue from $8.8 billion to $25 billion while net income catapulted from just $187 million to $2.76 billion. Over the same period, membership more than doubled from 81 million to 209 million in the current quarter.

The company has been investing in and expanding its original lineup of movies and TV shows to endear itself to customers. It now has an impressive library of titles across multiple genres and regions. It has already spent $8 billion on content creation in just the first half of 2021 and has a slate of new titles for the second half that should continue to excite. Netflix has enough clout to hold other new entrants at bay, including robust names such as Walt Disney and Amazon. The market pie is large enough for all streaming players to coexist and grow their subscriber base and profits in tandem.

Netflix intends to expand into gaming as a separate source of revenue and will treat it as another of its content categories. The initial focus will be on games for mobile devices and will be bundled together with subscriptions.

Sea Limited (NYSE:SE) is a Singaporean technology company with three main divisions: digital entertainment under Garena, e-commerce under Shopee, and digital payments branded as SeaMoney. The company has been growing by leaps and bounds as it extends its reach across Asia and Latin America, with impressive numbers that offer a tantalizing hint of what's to come.

Group revenue for its fiscal 2021 second quarter more than doubled year over year to $2.3 billion, while gross profit more than quadrupled year over year to $930.9 million. Sea's popular self-developed Free Fire game has notched more than 1 billion downloads on Alphabet's Google Play and continues to be the highest-grossing mobile game in Southeast Asia, Latin America, and India. Quarterly paying users has shot up 85% year over year to 92.2 million, and the division's esports event back in May chalked up a massive 5.4 million online viewers.

Sea Limited's e-commerce division is also making inroads into new regions, with plans to expand into India and Poland. Revenue for the division surged to $1.2 billion, up 160.7% year over year, while gross merchandise value jumped by 87.5% year over year to $15 billion. Gross orders more than doubled for the platform to 1.4 billion.

The company recently raised $6.3 billion through an equity offering and also intends to raise another $2.5 billion in equity-linked debt, all to fund further expansion. Sea Limited is setting its sights on gaining market share in new markets and will also spend on new games to capture a larger audience. It seems the company's momentum is set to continue as investors bid its shares up to an all-time high of close to $350.