When a biotech company develops a drug candidate that can help millions of people fight a monstrous disease such as Alzheimer's, it will certainly gain attention from scientists, the news media, and the U.S. Food and Drug Administration.

For Prothena (NASDAQ:PRTA), a huge wave of attention has also come from investors since the start of the year. But has its stock price gone too high too fast? Or is this just a sign of more gains to come as it develops a potentially best-in-class Alzheimer's disease portfolio to enter a market projected to grow by 5.4% per year through 2026, to reach $9 billion? 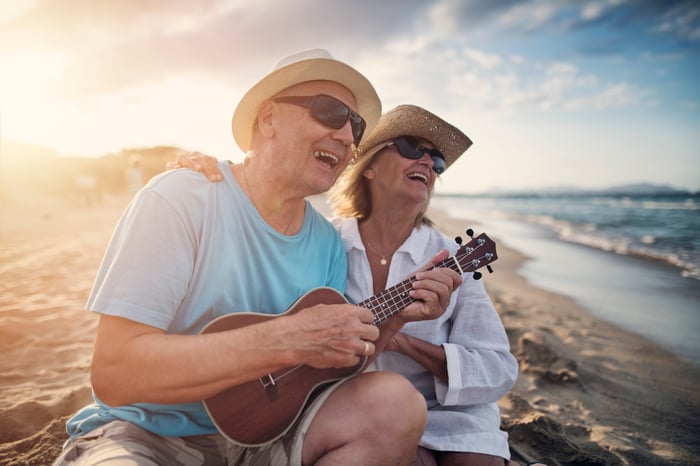 On July 26, Prothena presented new data at the Alzheimer's Association International Conference providing evidence to support the further development of its drug candidates to treat and prevent Alzheimer's disease.

The first of the candidates, PRX012, is a highly potent antibody treatment that can clear modified and unmodified plaque in the brain tissue on a convenient schedule, and be administered as an injection.

There are several reasons to be excited about the potential of this next-generation antibody, including its several advantages over Biogen's Aduhelm, which was approved by the FDA in June amid some controversy (more on that later). For example, PRX012 can "offer greater accessibility and compliance" than Aduhelm, according to Prothena's chief medical officer, Hideki Garren. The treatment can be delivered at a lower dosage, and its delivery method is an injection; this is often preferable to intravenous treatments, which can be lengthier, anxiety-causing among some patients, and often require hospital or clinic visits. Also, Prothena claims that PRX012 is 11 times stronger than Aduhelm.

That said, Garren does attribute some of the treatment's success to that of its competitor, noting that the FDA approval of Aduhelm "really opened up potential accelerated pathways for other anti-amyloid beta" antibody candidates ("accelerated" being the key word). Aduhelm did not show effectiveness in phase 3 trials until it was used at a higher dose, meaning it showed minimal effectiveness based on the guidelines of the review. But the FDA authorized accelerated approval based on the drug meeting its intermediate endpoint.

Because of this, Prothena's PRX012 now has the potential to benefit from a similar accelerated approval. As the company continues efforts to show further evidence that PRX012 successfully reduces plaque buildup as a treatment for Alzheimer's, it plans to submit a New Drug Application in the first quarter of 2022.

But the company is not basing everything on one candidate. It's also working on a vaccine candidate (PRX005) that helps reduce plaque in the brain while also treating for abnormal tau bindings and tangles that interfere with neurons, slowing the communication of information. PRX005 is an antibody developed in partnership with Bristol Myers Squibb to be used as part of a vaccine program for the prevention and treatment of Alzheimer's. Described by Prothena as a best-in-class investigational antibody, it is currently in phase 1 trials.

Having Bristol Myers Squibb on board is bringing an influx of revenue for Prothena. In June, it was announced that the former company had agreed to pay $80 million up front for an exclusive U.S. license for PRX005. Thanks to this collaboration, Prothena could potentially end up with a total of $2.2 billion, including all funds put forth by Bristol Myers Squibb for U.S. and global rights and regulatory and commercial payments. On top of that, the company has the potential to see commercial sales royalties across its other programs.

Amyloidosis is a disease that affects an estimated 50,000 people worldwide with abnormal protein buildup in tissues and organs which can lead to organ failure. The sale of that business could lead to a total of $1.2 billion in revenue if development and sales milestones are reached.

Prothena is expecting milestone payments of $80 million from Bristol Myers Squibb in the third quarter as part of its PRX005 collaboration, with a potential $55 million option for global rights at the end of phase 1 trials.

Without revenue-generating products on the market, management will continue to rely on keeping expenses in check and meeting milestone achievements in order to generate further net income. So far, expenses are growing a bit, but at a manageable rate of 18% for the first six months of the year on a year-over-year basis, to a total of $22 million. On a sequential quarterly basis, expenses have been flat at about $11 million. Much of this should be offset by the milestone payments anticipated for the remainder of the year and into the first quarter of 2022, when the company expects to submit its investigational New Drug Application for PRX012.

Big money brings a launchpad for the stock

Looking at the past year's stock price chart for Prothena, you might think it resembles a first-grader's drawing for the path of a spaceflight: straight up with a bit of jitteriness. The stock price has gone from $12 at the beginning of the year to $75, an astronomical gain of more than 520% in just nine months. 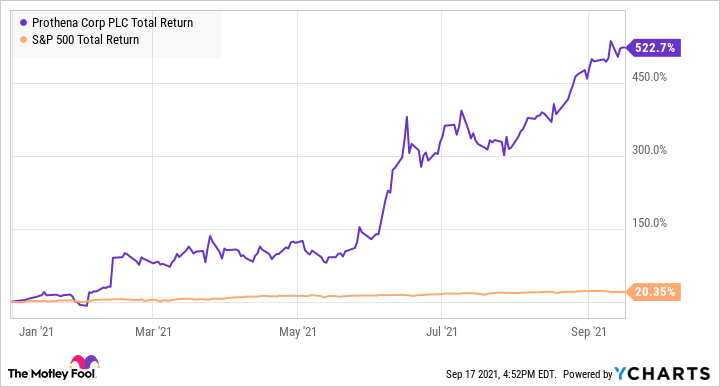 This kind of spike, supported by exciting details of a promising pipeline, can lead investors to fear missing out. Some might throw caution to the wind to hop on for the ride.

But a more thoughtful consideration reveals that the run-up could be over for now. Analysts have an average 12-month price target of $70 on the stock, slightly below its current level. Even with an investigational NDA for Alzheimer's treatments planned for the first quarter of 2022, accelerated approval could take as long as eight months (and regular approval even longer). For reference, after the accelerated approval of Aduhelm, Biogen's stock shot up from $269 to $406 in a week. It has since come back down to the $300 level.

Personally, I'll need a bit more convincing as Prothena's pipeline develops further along into additional clinical trial phases. The company has stated that it will provide additional study results at unspecified medical conferences in 2021. For now, I'll keep it on my radar.