Please ensure Javascript is enabled for purposes of website accessibility
Log In Help Join The Motley Fool
Free Article Join Over 1 Million Premium Members And Get More In-Depth Stock Guidance and Research
By Rekha Khandelwal – Sep 21, 2021 at 6:08AM

Can this fuel cell maker overcome the challenges it is facing today?

For decades, fuel cells have captivated the attention of innovators and investors alike. And why not? Fuel cells can generate electricity with low to no emissions and have many applications, from utilities to fuel cell vehicles. Their potential as a clean energy source and a storage of power is immense. Yet fuel cell companies of all kinds are largely struggling to become profitable. With the costs of renewable power and fuel cells falling, has the time finally come for fuel cell makers?

Let's take a closer look at a longtime player in the fuel cell segment, FuelCell Energy (FCEL -0.57%). The company's stock has fallen 45% so far this year and is 78% off its 2021 high price. Let's see if the stock's fall presents a buying opportunity.

FuelCell Energy offers carbonate fuel cell products that generate electricity from natural gas or biogas. The company's fuel cells reform the input fuel inside the fuel cell itself to generate hydrogen, which then produces power through an electrochemical process. This is a much cleaner way to generate power than burning the fuel directly. 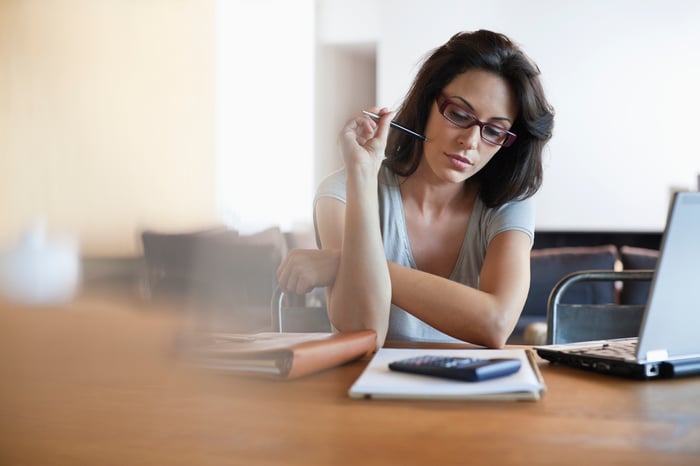 Right now, FuelCell Energy targets stationary power generation markets. That differentiates it from Plug Power, which primarily targets the transportation segment, including forklifts as well as hydrogen-powered vehicles. FuelCell Energy's customers include utilities as well as industrial and commercial customers, such as manufacturing facilities, processing facilities, universities, and healthcare facilities that are looking for clean power sources and want to reduce their dependence on the electric grid. FuelCell Energy does both -- sells the power plants upfront or enters into power-purchase agreements to sell the power generated over an agreed term.

Is FuelCell Energy turning around?

The significant competition from traditional and renewable energy sources, as well as from other fuel cells and technologies such as turbines explains why FuelCell Energy is struggling to grow its top line. The company's offerings don't match the costs of alternative options available, so customers aren't very incentivized to switch to fuel cells. 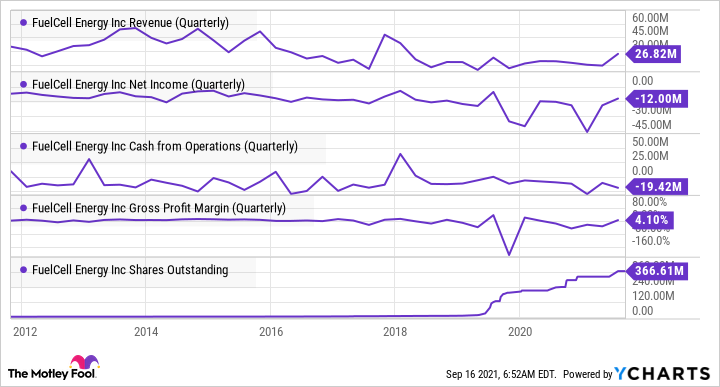 As the above graph shows, FuelCell Energy's revenue is on a downward trend for the last few years. It reported 43% year-over-year revenue growth in the latest quarter. However, the company needs to prove that it can sustain this growth in the coming quarters. Though FuelCell Energy's losses narrowed compared to the year-ago quarter, it still reported a loss of $12 million on revenue of just $26.8 million.

In addition to carbonate fuel cells, FuelCell Energy is developing hydrogen-powered solid oxide fuel cells and electrolyzers. This is still under development, and the extent to which FuelCell Energy becomes successful in this segment remains to be seen.

FuelCell Energy has not generated annual profits in more than two decades. It has also not generated positive cash flow from operations during this period. In the absence of profits from operations, the company relies on funds generated through equity issuances to carry out its operations. Its outstanding shares have risen from less than 3 million to 367 million in just five years. Obviously, that kind of dilution concerns investors, especially when the raised funds aren't resulting in the company's growth.

What's more, things like litigations from former partner Posco Energy add to investors' concerns. All in all, despite being in an interesting segment, FuelCell Energy doesn't look like an exciting stock and there are reasons why it is falling. Investors might want to look elsewhere for better options.