Shares of Alibaba have fallen over the past year. Here are a few risks to consider before buying the stock.

Investors often drool over the upside of Chinese companies, they operate in the world's most populated country, and second richest economy. E-commerce company Alibaba (BABA 0.51%) dominates China, claiming 15% of the entire global population as customers. But China's political risks can impact companies, making Alibaba a minefield of red flags that investors need to navigate.

The company's stock price has declined almost 40% over the past year. Is Alibaba worth buying on the dip? Here are three key things to consider before you make that decision.

1. Alibaba has been an expensive stock for years

A stock's past price movement can bait investors into thinking that a stock is expensive or inexpensive. In other words, "the stock is down 30% this year, so it must be a good time to buy." This can easily prove false because there are plenty of reasons a stock's price could swing. 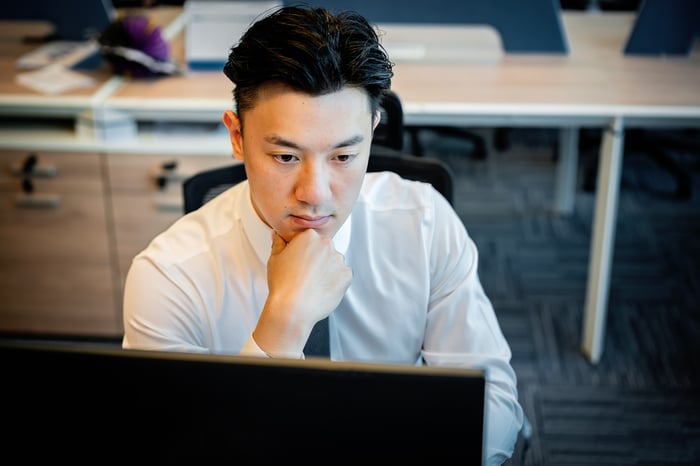 Let's compare Alibaba with Amazon (AMZN -3.31%), a peer with a similar business model (e-commerce and cloud services) and a parallel leadership position in massive markets. Shares of Amazon have traded at a price-to-sales (P/S) ratio in the low to mid-single digits ever since the dot-com bubble burst nearly 20 years ago.

Alibaba began trading on U.S. exchanges in late 2014 and had a P/S ratio of more than 24 in early 2015. Could you make the argument that Alibaba deserved a premium over Amazon? Sure, it's grown revenue an average of 48% per year over the past five years, versus 29% for Amazon.

But I don't think it's easy to justify a valuation that is many times higher than Amazon. If you track Alibaba's P/S ratio since 2015, you'll see it has been well on its way downward. The decline in Alibaba shares isn't necessarily some fluke that investors should rush to buy; its valuation has been in a multi-year downward pattern because the stock was overvalued.

Alibaba has been caught up in political turmoil over the past year. Alibaba founder Jack Ma criticized China's banking regulations; making controversial comments about China's financial system, which is heavily state-controlled, stating that it lacks innovation and has an outdated mentality about risk. These comments came shortly before Ant Group, another Ma-founded company that owns China's largest digital payments platform (Alipay), was scheduled to go public. Alibaba owns a one-third stake in the company.

Chinese regulators blocked the planned initial public offering of Ant Group, citing the potential risks to China's financial system, and it could now be forced to break up its Alipay platform and turn over user data to an entity partly owned by the Chinese state. Curiously, Ma was absent from the public spotlight for months following the blocking of Ant Group's IPO.

Investors must understand that the Chinese government is heavily involved in its businesses and has the authority to intervene in companies' operations.

Separately, China has pressured large Chinese tech companies with its "common prosperity" agenda to resolve economic inequality by redistributing wealth throughout the country. China's President Xi Jinping has emphasized the need to increase incomes for the poor and middle class, while "adjusting" excessive wealth.

China's largest companies including Alibaba have made pledges to support these efforts. In Alibaba's case, the company is giving 100 billion Yuan by 2025, the equivalent of $15.5 billion. Alibaba's profits for the entire fiscal 2021 year were $21.8 billion, so this sum might cause investors to think this move is too substantial to be purely voluntary.

These politically sensitive events create problems for investors. It's difficult to predict when, or to what extent a Chinese company might have a brush with its governing state. The events that have already occurred also make it hard to trust what is said in the future.

3. How much upside are we looking at?

Lastly, investors need to consider the potential upside if things do work out over the long run. Alibaba already has a $435 billion market cap. Amazon has a $1.7 trillion market cap but makes about four times as much revenue. Going by their current P/S ratios, they are fairly equal in valuation.

Alibaba would need to grow organically to drive up its share price because it's difficult to justify a premium to Amazon in light of all of the political noise. Analysts expect Alibaba to grow its revenue by 20% in 2022, so it could take years to see significant share price appreciation if political questions remain.

Consider opportunity cost for your dollars

Meanwhile, the stock market is a vast ocean of strong and emerging businesses. Maybe Alibaba can put its political questions to rest. Perhaps the stock can regain a premium valuation after a multi-year downtrend. Maybe Alibaba will continue to grow fast enough to generate strong investor returns.

But I'm not sure a $435 billion company has enough upside to justify all of these "maybes." Investors might do better looking at smaller, rapidly growing businesses that don't carry Alibaba's political baggage. Stocks in the creator economy including Fiverr, Pinterest, and Etsy could be great places to start.