A partial victory is better than a complete loss. Pfizer (PFE 0.84%) and BioNTech (BNTX 0.60%) are experiencing this firsthand.

The two partners had hoped that a U.S. Food and Drug Administration (FDA) advisory committee would recommend COVID-19 vaccine boosters for all Americans ages 16 and up. However, on Friday the panel voted 16-2 against recommending Pfizer-BioNTech boosters for the wide age range.

It wasn't all bad news for Pfizer and BioNTech, though. The FDA advisory committee also voted unanimously to recommend boosters for Americans ages 65 and up as well as for individuals of any age at high risk of severe COVID-19. Could Pfizer stock actually be a smart pick to buy after the partial victory? 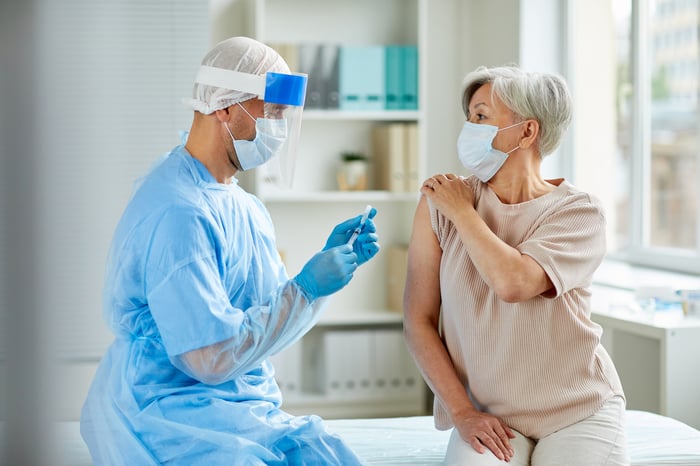 The FDA still must make a decision on boosters for the Pfizer-BioNTech vaccine. If the agency follows the recommendation of the panel and the Centers for Disease Control and Prevention (CDC) agree, a lot of booster shots could be on the way soon.

There are around 52.4 million Americans ages 65 and older in 2018, according to the U.S. Department of Health and Human Services' Administration on Aging. That number is undoubtedly higher today.

We don't know how many of these individuals received Pfizer's and BioNTech's Comirnaty COVID-19 vaccine. However, on an overall basis, Comirnaty makes up close to 57% of all COVID-19 vaccine doses given so far.

Back-of-the-envelope calculations indicate that in the ballpark of 25 million Comirnaty boosters could be administered over the coming months if the FDA and CDC give a green light to the boosters. Based on previous pricing for the vaccine, the total cost of boosters for the groups recommended by the FDA panel could approach $500 million.

The gravy train has already left the station

At first glance, the potential for an extra $500 million or so over the next few months could seem like a big deal. However, there are several reasons why it's nothing to get all that excited about.

Most importantly, there probably won't be any "extra" money coming to either company over the near term due to boosters. The U.S. has already ordered a total of 500 million doses from Pfizer and BioNTech plus another 500 million doses to donate to other countries. At least for now, it's unlikely that additional doses will be bought by the government for vaccinating Americans.

Remember, too, that Pfizer and BioNTech split the profits from Comirnaty. Even if the companies could count on additional U.S. government orders for boosters, the financial impact for Pfizer wouldn't make a huge impact. The company generated $19 billion in revenue in the second quarter and nearly $5.6 billion in profits.

There's really no compelling reason to buy Pfizer stock based on the FDA advisory committee recommendation. However, there are other reasons why investors might want to seriously consider the big pharma stock.

The need for annual boosters for everyone is still a real possibility. If Pfizer can count on strong recurring revenue from Comirnaty for years to come, the stock will look a lot more attractive.

Of course, Pfizer doesn't depend solely on its COVID-19 vaccine. The company has other growth drivers that investors should like, notably including rare heart disease drug Vyndaqel/Vyndamax and blood thinner Eliquis.

Pfizer's pipeline could deliver more big winners. A COVID-19 pill could be on the way. The drugmaker also has more than 20 other late-stage programs. It's also adding to the pipeline through deals, including plans to acquire Trillium Therapeutics.

Last, but not least, there's Pfizer's dividend. Many income investors will like the dividend yield that currently tops 3.5%.

Pfizer stock looks like a pretty good pick for some investors. But any approval for boosters for older Americans doesn't make a big difference in the decision to buy the stock one way or another.