I bought these two dividend payers when they looked unloved, and now I'd be loath to let them go. Here's why.

My favorite investments are large, well-known companies with durable businesses that are trading at modest prices. My tool of choice for figuring out when to buy is a historically high dividend yield. That's why I ended up buying Hormel Foods (HRL -1.67%) and General Mills (GIS -1.62%) a couple of years ago.

This article explains why I want to hold onto these two dividend stocks for years to come.

I have a habit of picking a high yield over fast dividend growth, which is why Hormel Foods and its modest 2.3% dividend yield is a bit odd for my portfolio. Interestingly, the yield hasn't changed much since my original purchase of the stock -- but the dividend has, as it's been increased every year for the past five decades. That makes Hormel a Dividend King, an extremely exclusive group of companies. Even more impressive, annualized dividend growth over the past decade has been an incredible 15%! 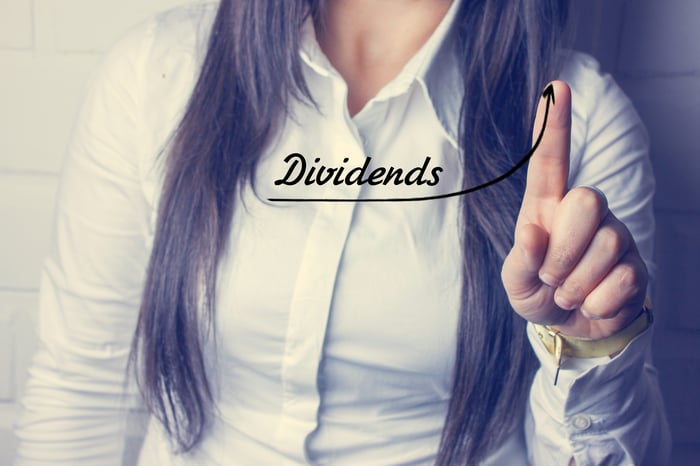 So despite the fact that Hormel's yield is about where it was when I bought in (which is historically high for the company), I'm still up on the position because its stock price has risen along with the dividend payout. That's exactly why I own it.

But what's going to power dividend growth in the future? The answer is that Hormel owns a large collection of industry-leading brands, including its namesake brand, SPAM, Skippy, Planters, and Wholly Guacamole, among many others. It has an impressive history of innovating around its brands to keep them relevant and keep the brands' sales expanding. In addition to that, this fiscally conservative food maker has been augmenting its business via acquisitions (Planters was the most recent buy). This has allowed Hormel to expand its reach into South America, augmented its position in the deli aisle, and allowed it to gain a share of the convenience space. In short, it is doing the right things to keep its business growing, from investing in the brands it owns to inking intelligent purchases that complement its core strengths.

Hormel probably won't excite you on the yield front, despite its historically high yield right now, but that's OK as long as you recognize that it will likely be more rewarding on the dividend growth side of things. Couple that with higher-yielding names and you end up with a more balanced dividend portfolio that won't leave your dividend buying power falling short of inflation.

2. General Mills: Going to the dogs, in a good way

I bought Hormel's peer General Mills for a completely different reason. Yes, the yield was at a historical high point, like Hormel. But General Mills had also just announced that it was making a rather large acquisition. Investors were worried it was overpaying, especially since management stated the dividend would flatline while it paid down the merger-associated debt. However, I saw this as an opportunity to get in on the cheap on a company that was investing wisely for the future. 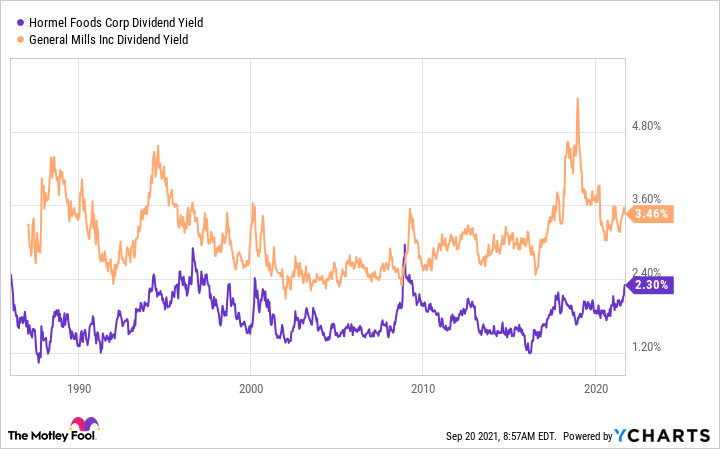 The acquisition target, pet-focused Blue Buffalo, is important. Blue Buffalo is the largest brand in the fast-growing healthy pet food space. The pet food maker was at an important crossroads when General Mills stepped in, as it was just starting to enter into the general grocery space after dominating in the specialty pet category. This type of rollout is exactly what General Mills is good at, and it has executed just as well as you might expect for one of the grocery industry's largest suppliers.

But the key here is that the food maker bought a leading brand to complement its collection of leading brands, like Yoplait and Cheerios, among many others. That's the company's strength, taking leading brands and running with them. Notably, this also includes innovation, which in the case of Blue Buffalo involves reaching into the pet snack category via another acquisition.

I don't expect General Mills to post the same level of dividend growth as Hormel, but I bought in when the dividend was yielding well over 4%. And the food maker has now started to increase the dividend again -- modestly, but sooner than originally projected. So I'm very pleased with this investment so far. Today the yield is around 3.5%, which is still kind of high historically speaking (though not nearly as attractive as when I took the plunge). However, the big-picture theme is that this food maker has a long and successful history of doing the right things to grow over time. It makes a solid one-two dividend punch in my portfolio when I place it side-by-side with lower-yielding Hormel.

For the long haul

When I look out to the long term (forever is about as long as it gets), I'm not thinking about what a company earned in a quarter given that performance will wax and wane over time. I'm thinking about how it operates from a strategic point of view, and how the stock generally fits into my overall portfolio.

Hormel and General Mills are well-run food companies that have proven their resilience over time by doing the "right" things (think product innovation and shifting with the world around them). The key for me was seeing that and stepping in when their yields were historically attractive. Now I'm content to sit back and let my dividend payments compound, and perhaps jump in again once in a while when the market presents an opportunity.

On that front, Hormel is looking fairly attractive again, and I'm considering adding to my position. General Mills not quite as much, but I'm watching and hoping that Mr. Market gives me a chance to add some more during a broader market pullback.