This fast-growing fintech seeks to capture a burgeoning segment of the digital commerce market.

Buy now, pay later -- and do it in small, affordable increments, with a smartphone app. What could be more American than that? Affirm (AFRM -2.41%) is a high-flying fintech player out to revolutionize the way consumers pay for online purchases with payment plans that are just this easy. With deals in place to serve several e-commerce giants, as well as a growing trend in favor of installment payments, Affirm looks well-positioned to soar.

The San Francisco-based company, founded in 2012, has established key partnerships with Walmart, Shopify, and most recently Amazon.com, providing installment plans for purchases of $50 or more. Think of it as a flexible digital credit card with no fees and transparent interest rates. Customers can shop through Affirm's handy smartphone app, find deals, and select a payment plan that works for them.

Though it's not the biggest player in the U.S. or abroad, Affirm offers advantages that its competitors do not. Product reviews from Investopedia call it the better choice, because it features more financing options, no late fees, and loans up to $17,500. Investopedia also notes Affirm's credit card option, which allows consumers to pay off their purchases in four installments without fees or interest. 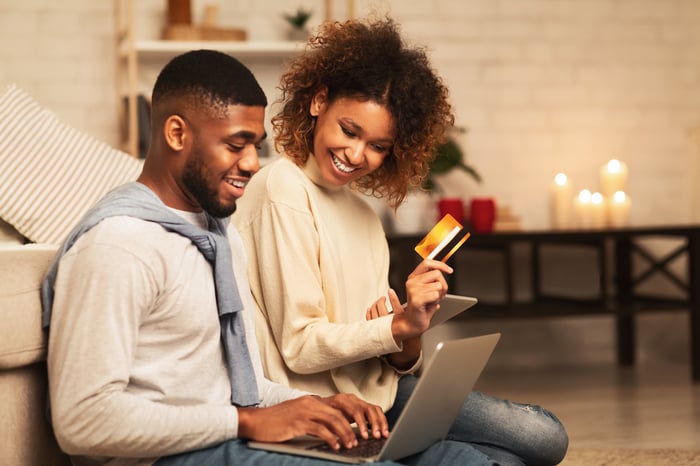 The company recently reported blow-out financial results, including a 71% increase in total revenue, year-over-year. It is also led by Max Levchin, a visionary CEO with a proven track record that includes co-founding PayPal.

The outlook for e-commerce sales is only getting brighter. A forecast by research firm eMarketer forecasts U.S. e-commerce will grow 17.9% this year to $933.30 billion. That puts e-commerce on track to take more than 20% of total U.S. retail by 2024.

Lately, Affirm has been locking down key partnerships with the biggest players in e-commerce and cementing wide consumer acceptance. In its most recent quarter, the company says its active consumer base grew 97%, to 7.1 million, and its merchant base grew 412%, to nearly 29,000, over the last year. Another key metric, gross merchandise value, grew 79% to $8.3 billion.

Affirm's initial growth came largely on the back of its key partnership with Peloton. How else do people afford a $5,000 exercise bike? But its impressive lineup in newer agreements with major online retailers mitigates a key risk for a company that was too focused on one big partner. It's also a good sign that the company's meteoric growth can continue.

Right now, Affirm's growing mostly by attracting new customers, but it's beginning to show some modest signs that existing customers are sticking around and using its services more. From 2019 to 2021, the company's average annual transactions per customer rose slightly, from two to 2.3.

However, Affirm is hardly alone in the buy-now-pay-later space. It's not even the biggest player. According to eMarketer, a privately held Swedish fintech firm, Klarna, leads this market with a 48.6% share of all the world's buy-now-pay-later plan users. Then comes Australian-based Afterpay (AFTP.Y) with 28.1%. Affirm comes in third with 13.4%.

Competition for buy-now-pay-later customers likely will be fierce, but the prospect for big rewards are compelling. In less than 12 months, Klarna went from a valuation of about $5.5 billion to $46 billion, according to Reuters. Affirm's market capitalization, by contrast, is about $30 billion with a much smaller market share.

Currently, Affirm is the main game for U.S. investors wanting to focus upon this industry segment. Klarna is privately held, though it plans to go public in the next year. Afterpay is a foreign company with a thinly traded stock in the U.S.

Affirm is a fast-growing fintech player that is reporting losses as it takes market share. For its 2021 fiscal year ended June 30, losses totaled $430.9 million, up from a $112.6 million loss in the previous year. But the company said the spike in losses was largely due to increased stock-based compensation following its recent initial public stock offering and warrant expenses related to its agreement with Shopify.

Like most technology companies, Affirm must keep growing and attracting capital to sustain its promise to investors. Investors are paying for growth first and the hope of profitability later. Just remember that the company operates in a competitive market. Affirm's deal with Amazon, for example, is non-exclusive, meaning other players can get a piece of the online shopping giant as well.

So what's it worth?

Nevertheless, investors are clearly excited about Affirm. The company went public in January at $49 a share and quickly spiked to nearly $147. As we write this, the stock is currently trading around $108.

The market likes trends driven by younger consumers. Millenials account for 42.7% of the buy-now-pay-later market, eMarketer reports.  That sector's looking like a gold rush on a crowded mountain, but the prospects for growth are large enough for multiple players to flourish. Affirm has a solid strategy, and it's currently the most available option for U.S. investors.

Investors could cool their enthusiasm in the near term as the company faces intense competition.But for the long-haul investor, Affirm is building a platform with the potential to grow into a fintech behemoth.