If you have some cash to put to work, here's a market-beating stock that you need to consider.

Besides being the official start of fall, September is usually a weak month for the stock market. This year is no different, as all three major U.S. indexes are in the red. For the long-term investor, however, this is nothing more than a blip on the radar, and instead should be used as an opportunity to scoop up shares in first-class businesses.

A top stock that's been hit hard recently is Five Below (FIVE -0.34%). The discount retail chain's shares are down 11% this month, mainly due to its second-quarter 2021 financial results, which disappointed Wall Street. But if we look at the fundamentals of the business, things look just fine.

Here's why Five Below is a stock you should invest $500 in right now.

Over the past five years, Five Below has trounced the S&P 500, rising 366% during that time. What's more impressive is that the company has crushed its bigger rival in the industry, Dollar General (NYSE: DG), by a wide margin. 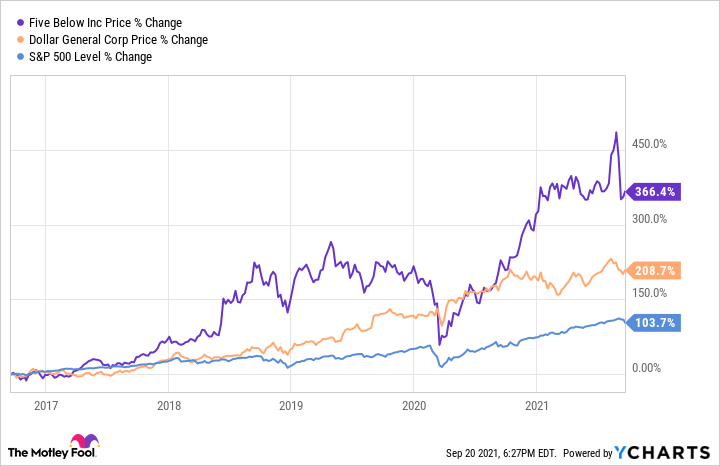 Outperforming like this over an extended period of time must mean that the business is doing something right, and that's definitely the case with Five Below. Catering to adolescents and their parents by selling a broad range of products, primarily under $5, has been extremely lucrative. From fiscal 2015 through fiscal 2020, revenue went from $832 million to just under $2 billion. And in the most recent quarter, sales surged 52% compared to the year-ago period.

Five Below has been so successful because of its treasure-hunt shopping experience that provides high-quality goods at low prices, similar to what Costco Wholesale uses in its warehouse clubs. Customers are presented with vivid displays of merchandise, sorted into eight different worlds: Style, Room, Sports, Tech, Create, Party, Candy, and Now. Trendy and seasonal themes, like back-to-school and Halloween items, support demand throughout the year.

Five Below's expansion strategy centers on opening more stores year after year. The store count has more than quadrupled over the past decade, and today totals 1,121. This plan makes complete sense given just how productive each location is. An average store (approximately 9,000 square feet) generates greater than $2 million in annual sales. And with average four-wall earnings before interest, taxes, depreciation, and amortization of $450,000 compared to initial build-out costs of $300,000, the return on investment of 150% is truly remarkable. 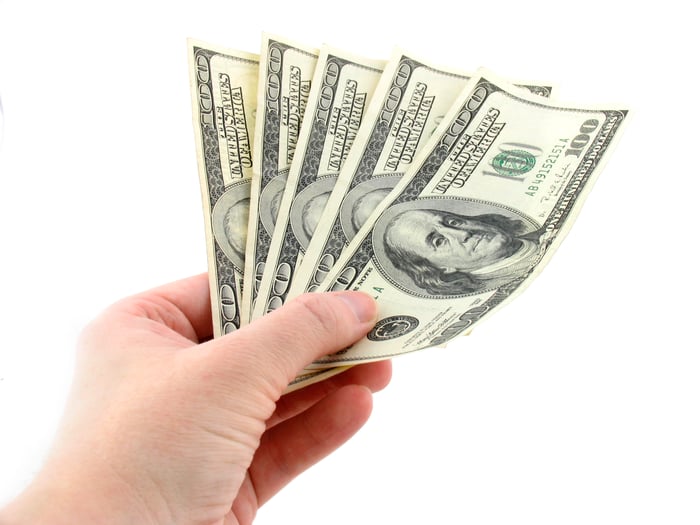 These economics make it clear that Five Below should continue opening stores at a rapid pace. "We now are on track to open 170 to 175 new stores this year and end fiscal 2021 with nearly 1,200 stores, leaving us a long runway ahead to reach the 2,500-plus total store potential we believe exists in the United States," CEO Joel Anderson said on the recent earnings call.

Even more impressive is that this fast expansion hasn't resulted in large amounts of indebtedness. In fact, Five Below has no outstanding long-term debt on its balance sheet, affording shareholders downside protection in times of economic uncertainty. Management has been adept at plowing back cash generated from operations toward developing stores. Expect the same in the years ahead.

Don't worry about the valuation

With a forward price-to-earnings ratio of 39, Five Below's stock trades at a premium valuation when compared to Dollar General (22) and even best-in-class retailer Target (19). But consider that Wall Street consensus forecasts call for Five Below's earnings to triple over the next three years, which is significantly faster than the aforementioned businesses.

Keep calm during the ongoing September market sell-off. Paying up for Five Below, especially after its shares have sold off this month, can prove to be extremely worthwhile for your portfolio.